Prophecy significantly improves upon the original Hydrophobia, but not all of the issues from last year's Xbox Live Arcade game have been resolved.

Hydrophobia Prophecy is an updated version of Hydrophobia, released last year on Xbox Live Arcade. It's a tense third-person adventure, with an innovative physics engine which accurately simulates the flow of huge amounts of water. This normally life-giving liquid dominates the environments, forcing you to deal with the game's challenging puzzles and action in surprising new ways.

Prophecy is set in a dystopian near-future in which the world is suffering from severe overpopulation. The events unfold on a huge ship, The Queen of the World, which contains the Five Founding Fathers, who are corporate men who have prospered while others have struggled to sustain themselves during the massive population surge. The ship is attacked by terrorists calling themselves the Malthusians (named after politician Thomas Malthus, who predicted that population growth would outstrip agricultural development.) Cue the reluctant hero, systems engineer Kate Wilson, who attempts to uncover the terrorist plot and save the ship's passengers. Wilson is a believable central character, and it's refreshing to see a strong female protagonist who is able to overcome tough situations without the aid of a male hero.

In the PC game, the story is fleshed out with additional cutscenes and an extra layer to the terrorists' plot. Rather than just causing terror, the Malthusians are aiming to steal technology from The Queen of the World and weaponize it. You are also introduced to the leader of the terrorists for the first time. These new story elements create a great deal more intrigue and add to the game's violent vision of Earth's future. Unfortunately, not all of these additions are explored to their full potential, especially when you reach the new ending, which comes very suddenly and doesn't really tie up any of the story threads. In addition to the new plot elements, the voice of Scoot has been recast, which makes a big difference. The laughably bad acting in the original detracted from the events of the story and often spoiled the dark atmosphere. This role is now delivered in a more convincing manner, which makes the story much more believable.

When the ship is damaged by the terrorists' attack, Kate must move through its dark interior trying to halt their progress in any way she can. With the hull breached, you have to contend with highly realistic flowing water that, while often a source of tension, can be manipulated to solve puzzles or gain a tactical advantage in combat. In puzzles, water is generally used to help you traverse an area or reach something that was previously inaccessible. One such scenario has you destroy a section of the ship's already-damaged hull to fill a large area with water, which then allows Kate to swim up to a spot that was previously out of reach. In combat, exploding a floating fuel drum creates huge waves that unbalance your foes or send them flying into the environment, knocking them out and drowning them. You can even start oil fires on the surface of the water and then manipulate the waves to push the flames toward hiding enemies.

Hydrophobia's third-person combat will feel familiar if you've ever played a cover-based shooter; Kate takes refuge behind obstacles and can then lean around them to take out enemies. Her handgun can be upgraded with different ammo types; you begin with stun rounds that have to be charged by holding down the fire button. The stun is nonlethal unless you hit an enemy many times, so early on in the game, it is important to use the environment against your foes by shooting leaking gas pipes and overhanging electrical cables. Ammo upgrades are far more effective, though they're also scarcer. They range from regular bullets and electrically charged shots to incredibly useful remote-detonated explosives. The rarity of these ammo types heightens the tension because you are constantly under pressure to make sure that your shots are accurate. If you're wasteful with your attacks, you'll be reduced to using the stun shot again.

In the final parts of the original game, combat became extremely frustrating because charging the basic weapon made fighting larger numbers of enemies very difficult. In Prophecy, this is eased somewhat by water-based powers that Kate earns later in the game. They allow you to manipulate water in the environment, create massive waves to knock enemies over, and also throw objects. The controls sometimes make these powers difficult to use quickly, but they certainly give you an edge in combat once you are used to them.

Unfortunately, you don't get much time to use these new skills before the game is over, so the combat issues from the original game remain for most of Prophecy's Story mode. The lack of a melee attack continues to be an issue in Prophecy, especially in areas where environmental kills aren't possible. You are forced to repeatedly shoot enemies with the stun shot if you run out of other ammo, and there is no way to stun enemies and then quickly finish them off up close. The enemies themselves lack variety; you spend the whole game fighting the same nameless, faceless terrorists, and there's little variety in their weapons or attack patterns. One section also features enemies that constantly respawn as soon as your back is turned, making for an intensely frustrating fight before you earn the new water powers.

The water in Prophecy is just as visually impressive as it was in the original release, and has been improved to prevent it from causing as much frustration. This has been achieved by making slight adjustments to the amount of water in some areas, tweaking the level design, and reducing the size of some of the larger waves. This allows you to traverse many areas much more comfortably, especially those where you have to contend with flowing water that is strong enough to push you through the environment. Swimming was also an issue in the original Xbox Live Arcade release, but more responsive controls in Prophecy make underwater sequences a lot more enjoyable. There is also a new meter displayed on the screen to show how much air Kate has left before she will drown. This makes swimming sections significantly less frustrating than they were previously, when there was little indication of how long Kate could survive underwater.

Hydrophobia Prophecy's controls are also much-improved. The control scheme now uses a more conventional layout for platforming and for combat. The mouse and keyboard controls are very comfortable to use during the combat and on-foot exploration, though they become a little clumsy during the occasional platforming and swimming sections. If you choose to play this PC version with an Xbox 360 controller, you'll notice that firing a weapon now uses the traditional-button layout of left trigger to aim and right trigger to shoot. This replaces the complicated three-button system used in the original Hydrophobia and allows you to focus more on the enemies around you instead of trying to remember what to do with the controller.

When Kate isn't simply trying to keep her head above water, Hydrophobia has some interesting mechanics that break up the constant threat of a watery grave. There are several enjoyable platforming sections where Kate must navigate narrow ledges and tough obstacles. There is also a hacking minigame that is used to unlock hidden areas and security-protected devices. You must manipulate the frequency and wavelength of a sound to match the electronic signal of the device that Kate is attempting to access. This kind of gameplay is a relaxing break from Kate's otherwise intense fight against the Malthusians.

Outside of the high-tension underwater action and the impressive physics system, various parts of the game have undergone changes for Hydrophobia Prophecy. The heads-up display has been improved by the option to have an objective marker appear onscreen at all times, rather than forcing you to stop and use the game's complicated map to navigate. Checkpoints are better too, and no longer force you to replay the last several minutes whenever Kate dies.

There are a variety of collectables and unlockable items that entice you to explore the whole of The Queen of the World. The most interesting of these are documents and journal entries that are unlocked as you progress and help to give additional backstory, fleshing out the universe of the game. There are medals to unlock by performing certain actions within a level. Some of these are awarded for completing primary objectives, but others involve optional tasks or puzzles. You can also unlock a Challenge Room where you take on waves of Malthusians and compete for high scores on the game's leaderboards. All of these extras serve to add some much needed replay value to the relatively short story mode, which should take only three to four hours at most on the normal difficulty.

Hydrophobia Prophecy's visuals are impressive and generate the tense atmosphere that is the best part of the experience. The graphics are great, especially if you have a system powerful enough to run the new high-resolution textures and high-detail water. The game is also challenging; combat and puzzles must be approached with caution because slight mistakes can quickly result in death. The story has been improved, and though some of the dialogue is still filled with cliches, the recasting of Scoot has made a massive difference to the game's overall tone. Hydrophobia Prophecy is much more enjoyable than the original Xbox Live Arcade release and is definitely the version to play. 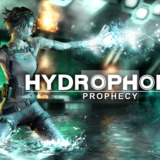