The best boat-racing game to hit arcades has made its way to the Dreamcast - but what it hasn't done is brought anything new with it.

When you think about racing games, you naturally think of wheels - be it two, four, six, or ten. The most memorable racing games have put you on some sort of road. Why is that? Perhaps air is too bland in its sheer openness, and water simply doesn't deliver insane jumps, tight corners, and clever tracks. Prepare to reevaluate that opinion, because the best boat-racing game to hit arcades has made its way to the Dreamcast - but what it hasn't done is brought anything new with it.

If you've played the arcade version of Hydro Thunder, you already know everything about the game. So little has changed, in fact, that you'll wonder if Eurocom even made an attempt to do anything more than port the game's code to the Dreamcast. There's no intro, no new modes, no CG of any form - just the simple single-race-then-start-over play style that you'd expect from an arcade game. It's almost as if Midway were satisfied with simply changing "insert coin" to "press start" and was done. This game has only two modes - play on your own, or play with a friend. There's no time trial, no tournament, no battle or practice mode, just the pay-per-race-styled "game" mode that you're already familiar with. And once you're actually in the game, there's not a whole lot you can do besides race. There's no difficulty control besides the actual track you pick; the mid-race pause menu has no options control; and the game doesn't even allow you to restart your race. You'll have to quit out to the title screen and choose your track and boat all over again. But what the user interface is lacking, Hydro Thunder more than makes up for in gameplay.

Boat-racing games have had little success because of the vast difference in physics from conventional street racers and the inability to replicate this difference accurately. Hydro Thunder breaks that trend and shows that boat racing is indeed a different dish. The engine was built entirely from the ground up, and it's clear that the team had spent plenty of time making the physics as real as they've ever been in a boat game. Probably the most impressive aspect of the engine is that you can see your boat bounce in the wake created by another racer. These effects, combined with the realistic nature of the game engine easily make Hydro Thunder the best racing game to hit the water.

Speed is a racing game's most essential attribute, and Hydro Thunder has plenty of it. Even with tons of on-screen activity the frame rate is silky smooth, and pop-up simply doesn't exist. In the first-person view a breathtaking sense of speed is achieved, with only slight diminishment in the other views. The graphics are simply amazing. All the different flavors of boat racing are represented in Hydro Thunder - from catamarans to powerboats to nuclear-powered concept racers. And each boat not only has a distinctive hull shape, but it also has distinctive markings and flair. But that's just the beginning. The real eye candy is contained within the tracks. The track design is really innovative, and it takes advantage of the water setting. There are approximately three different types of water present in Hydro Thunder. The deep water comes in two types - calm or choppy, which are easily distinguishable by the excellent graphical effects. The third type of water is the calm shallows, from where you can see the river's bed, which is often littered with buried treasure, sunken ships, hungry sharks, or derelict aircraft. But easily what is most impressive about Hydro Thunder's graphics is how much you can see. All the tracks have hugely detailed backgrounds, and, as stated earlier, pop-up has taken an exit.Not only does each boat have a distinct graphical look, it also sports its own engine effects. Some engines give the throaty growl of 16-cylinder gas guzzler, while others have more of a high-tech whine. The sound effects are done well, with good use of voice effects in the form of your aviator's private radio and the announcer. The music is all tense race-it-up-type music that makes it easy to use a lead foot.

If the Dreamcast controller excels at any genre, I'd have to say it is racing. The analog buttons on each shoulder are easily the most comfortable and intuitive setup I've used in a while, and it gives you better control than the arcade version did. The boost-jump is incredibly easy to use, and it helps you take full advantage of every track's secrets. The game's thirteen courses are full of huge falls, hidden areas, jumps, tunnels, shortcuts, and more. Want to tunnel through an ice cave? You can. Want to race under the docks of Venice? Do it. Feel like racing through King Tut's tomb? It's all you.

Unfortunately, the game's AI is a bit frustrating. It would seem that the computer-controlled opponents are faster depending on which boat you select. If you choose a faster, more difficult boat to control, you'll be up against faster opponents. This makes it a bit lopsided, as you get none of the pros but all the cons inherent in choosing a more difficult boat. So, in short, the best boats to select are the slowest ones, unless you're less concerned with winning the race than you are with placing the fastest time. Perhaps the most frustrating element of Hydro Thunder is the outright difficulty. You always start in fifteenth place, and the only way you can win a race is by hitting every boost, taking every shortcut, and hitting no walls. As if that weren't enough, Hydro Thunder retains the time gates - an arcade element. This makes finding shortcuts more accidental than intentional, as you've no time to stop and explore the track.

Hydro Thunder was the best boat racing game to ever hit the arcade, and the Dreamcast version carries that tradition to the consoles. However, it suffers from a user-unfriendly interface and brings absolutely no extras home. Without a tournament mode, the game's replay value is hindered incredibly, and the lack of practice modes or time trials make the learning curve very steep. Hydro Thunder is a game I desperately wanted to like, but I was ultimately discouraged by the actual game because of the still-present arcade feel. At its core, Hydro Thunder is still a very exciting, edge-of-your-seat racer that offers awesome graphics and a solid engine, but in the end it almost punishes you for liking it. 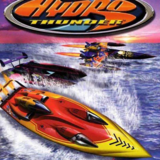