House of the Dead 2 Review

Just a gun that lines up with the sights doesn't seem too much to ask for.

The often-used phrase "Virtua Cop meets Resident Evil" doesn't quite do Sega's zombie-blasting arcade gun-game series justice, but it's certainly close enough to give you the general idea of what the House of the Dead series is all about. In it, you're part of a government agency in charge of stopping the machinations of the nefarious and incredibly monotone Goldman, a suit-wearing evil mastermind intent on wiping out the human race with his monster hordes for reasons that never really quite make sense - or have to, for that matter. If that sounds like the plot for the first House of the Dead game that's because, well, the evil is back!

While the graphics in the home version of the original HOTD fell far short of its coin-op cousin, the Dreamcast port of the second game is virtually identical to the arcade sequel and looks phenomenal. The monsters and their environments are incredibly well modeled and textured, and your gunshots blast gory green holes through the zombies (which look fantastic when they get up close enough to take a bite out of you) and the other assorted nasties.

The home version of HOTD2 also stacks up very well in terms of added value, with four different modes in all: arcade, original, boss, and training. The arcade mode is the heart of the game, wherein you shoot zombie after zombie and confront boss after boss. Original is essentially the same, but in it you can set your bullets for extra damage or expand your clip, but you're locked into the basic options. (In arcade, you can increase the number of your continues and lives.) Meanwhile, boss mode lets you practice taking on the game's boss monsters, and training mode sets you up in a number of point-blank-style puzzle/shooting levels, where you'll shoot a dozen creatures with only a limited number of bullets, save humans from zombie attacks, knock zombies off moving cars, and blast barrels within a time limit. This mode is great fun and carries the potential to be almost as strong and entertaining as the main game itself, save for a few drawbacks.

Even without the training levels though, House of the Dead 2 carries excellent replay value. The main game has numerous branching paths along the way that split off nearly every time a human is in danger of getting killed by a zombie. If you can blast the attacker in time, you're rewarded with either a health-up or a different track to explore. There are enough branching pathways that you won't see everything the game has to offer until you've played it through multiple times, and it's fun enough where you'll want to do just that. This is definitely one area where the HOTD series really beats the pants off of its main competition, Namco's Time Crisis line, but things unfortunately don't turn out nearly so black-and-white in the end.House of the Dead 2 is an incredibly tough game. In fact, it's hard to a fault. You'll play through tons of times with the options set to nine continues (very easy) and five lives before you'll get anywhere near the end. Also, the training stages also appear to begin at an expert difficulty level; since there are five degrees of toughness to each of the stages within it, it would have been nice if training started off easier. The main problem seems to be that you just don't get enough bullets in each clip. Your character carries a semiautomatic, which generally has a clip size of about twelve rounds because it isn't as powerful as, say, a .357 Magnum, and it fires more rapidly. Strangely enough, however, you only get six bullets per clip - the same number you'd find in a revolver, and your gun doesn't have nearly that much "stopping power." (Remember the Magnum in GoldenEye 007?) When it comes down to it, the game doesn't need to be anywhere as hard as it is, because it already provides such a great deal of value through its branching pathways and training mode. Being this difficult just leads to screaming fits on the part of the player. (The barrel-blasting level got me mad enough that my TV almost had it.)

Another problem with the game stems from the whole gun issue. The game was made to be played with a light gun, which Sega of America opted not to bring out in the US, ostensibly because the folks in the mainstream press were calling gun games "murder simulators" after the tragedy in Colorado. Not content to simply refuse to release a light gun in the States, Sega implemented a lockout in the US version of the game, keeping owners of the imported Japanese gun peripheral from using it with the title. At press time, two third-party manufacturers have released light guns to the US market, but both have calibration problems with certain television sets, making them tough for us to recommend. All of these factors lead to you having to play the game by using a standard DC controller, which is not only much less fun, but also more difficult to master. The game requires you to aim at opposite sides of the screen frequently, which is hard to do when you're waiting for your target to move into place. You'll wish for a reliable light gun while playing HOTD2. Often. Just a gun that lines up with the sights doesn't seem too much to ask for.

It's a damn shame, really, because with some fine tuning of the difficulty settings and a proper light gun, House of the Dead 2 could be far and away the premiere console gun game, largely because its replay value is far more impressive than that of the PlayStation version of Namco's Time Crisis. In the end, the game just didn't get treated with the respect it deserved. Like a man without a country, HOTD2 is a gun game without a gun, which all but cripples it. 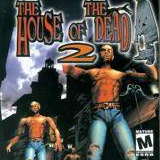