Hotline Miami 2: Wrong Number's action is so loud and intense that upon hitting the pause button, reality feels like it's playing at half speed. It's the type of experience that invites you to sit closer to the screen and crank up the volume higher than usual. One of the lingering memories of the first game was its heart-pounding techno soundtrack, so allow me to get this out of the way: The music in Hotline Miami 2: Wrong Number is absolutely outstanding. But to revel in the game's slick style too much would be a disservice to its ferociously entertaining and challenging top-down action. This is a confident follow-up which improves upon the original in almost every way. Hotline Miami 2 is more varied, paced better, fairer, and more challenging. This is a tremendously stylish game which entertains throughout, and delights in forcing you out of your comfort zone.

Hotline Miami 2 is a top-down twitch shooter in which you play as one of many available psychopaths who, for an assortment of reasons, are required to enter various buildings and kill everyone therein. You commit these massacres using a variety of weapons: shotguns, automatic rifles, silenced pistols, knives, pipes, and even your fists. But regardless of the delivery method, death comes quick. Don't expect to soak up damage or pick up health packs. This is a game in which a single bullet can kill you and your foes, and in which on-your-toes tactics and a quick trigger finger mean the difference between completing a level and respawning over and over and over.

The intense visuals thumping techno soundtrack, and score multiplier will seduce you into risking it all in one glorious, foolhardy charge.

How you choose to clear each area in the game's thirty-or-so levels is largely up to you. You can run and gun with reckless abandon or use a loud shotgun burst to lure nearby enemies into your path. Maybe you'd prefer to use a door to knock-out enemies and finish them off silently. Whichever method of murder you choose, the engagements are exhilarating. Though planning your attack will net the best results, the intense visuals, thumping techno soundtrack, and score multiplier will seduce you into risking it all in one glorious, foolhardy charge. Hotline Miami 2 is a high-saturation feast for the eyes, where points burst out of fallen enemies as the screen tilts and sways to the movement of your character. The game's striking color palette and VCR motif evoke the in-your-face TV style of the late 80s and early 90s. Each level's floors, walls, and furnishings are vibrantly colored, though by the time you've finished any given level, much of it is painted an electric crimson.

While the first game was centered around a single mask-swapping protagonist massacring operations run by the Russian Mafia, Hotline Miami 2 darts back and forth between dozens of characters and locations. At one moment, you're a journalist attempting to use non-lethal takedowns in a subway station; At the next, you're a soldier using a flamethrower to incinerate enemy forces in Hawaii. While you spend a lot of time running around buildings, there's far more more variety in terms of level design. Halls and rooms have more interesting angles, extra windows, more open areas, and multiple lanes for enemies to approach from: while better enemy placement creates increased diversity in the types of engagements you'll encounter. The melee-resistant dogs return, as do fat enemies which are impervious to anything other than bullets. But they're joined by bullet-ducking samurai, running enemies who leap to close the distance, and a selection of level-specific mini-bosses. This is a game about planning your engagements and reacting to how the enemies attack. With more diverse levels populated with better placed and more varied foes, Hotline Miami 2 becomes a far more entertaining and challenging experience than its predecessor.

Hotline Miami 2 darts back and forth between dozens of characters and locations.

This ever-shifting pace and variety allows Hotline Miami 2 to be more restrictive in other ways. While the first game gave you the freedom to select a mask--and thus, a special ability--before each level, the character choices here are a lot more rigid--and this is to the game's credit. Though you can sometimes choose from a small selection of weapons, or select a specific sociopath, the story typically forces you to play a particular character. No longer can you choose the Tony the Tiger mask to silently take down people in every single level.

Instead, the game encourages you to get better at shooting by forcing you to play as more run and gun characters. For instance, Mark the Bear uses two machine guns, holding them out at arm's length, John Woo style, when you press the alternate fire button. My personal favorite character, however, is actually a swan-mask-wearing duo--Alex and Ash--who runs with a chainsaw in the front, and guns in the back. While you can always use the lock-on button to cue up shots ahead of time, there's a spectacular joy in chainsawing one group of enemies while popping off reinforcements as they enter the room. These are a but a handful of the dozen-or-so characters you'll play as during Hotline Miami 2's campaign.

So what is there to say about the story? There's a lot more of it, for one. The first third of the game has you sitting through long periods of confusing exposition that do little to clarify exactly what's going on. But even when Hotline Miami's story eventually finds its pace, you're probably not going to be taken aback by the narrative. The original game intentionally obfuscated what was going on behind an unreliable narrator and secret endings, and much of that continues here. Callbacks to the first game, shifts in perspective, and furious timeline swapping make the story read better on a second playthrough. The story's main success is in creating a surreal experience that's best enjoyed by letting the specifics wash over you.

In almost every way, Hotline Miami 2 is a marked improvement on an already tremendous formula.

Hotline Miami 2 is a challenging, often difficult, game, but playing through it's varied levels is so enjoyable that dying rarely feels like punishment. The game's grading system gives you an excuse to return to levels, but its neon-hot style is an even more inviting reason to play again and again. The experience is so audiovisually seductive that you find yourself replaying zones just for the sake of it. Hotline Miami 2's vibrant palette, outlandish early 90s style, and intense music make it difficult to resist. The soundtrack sees returning artists such as Perturbator and Jasper Bryne supply a breadth of synth and techno tracks, alongside a host of new musicians. Smooth post-rock guitar stylings find a home beside heartwarming house beats and a particularly threatening dubstep number. Not only is the music as exceptional as the first game's, but there's also a lot more of it.

Actually, there's a lot more of everything: I completed the original Hotline Miami in about three hours, but by the time Hotline Miami 2's credits had rolled, I'd registered almost nine. Of course, this was before I had started over with the unlockable hard mode, which adds enemies and removes the ability to lock on shots--and before I had toyed around with the game's level editor, which is currently in the alpha testing stage.

In almost every way, Hotline Miami 2 is a marked improvement on an already tremendous formula. This is a game that had me pumping my fists and laughing with joy throughout my time with it, and I was left despondent by the time it drew to a close. A gutsy, refined game that isn't scared to force you into corners and watch you battle out of them, as well as an audiovisual joy that marries graphics, music, and gameplay so well that even the pause screen is a work of art.

View Comments (199)
Back To Top
9
Superb
About GameSpot Reviews 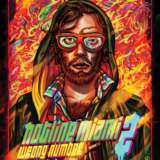 Danny is a lifelong fan of electronic music and loved the first Hotline Miami. Upon completing Hotline Miami 2: Wrong Number, he spent $70 on the limited edition vinyl LP and returned to complete it again on hard mode. He reviewed the PC version mostly using the keyboard & mouse.