Hotel Dusk weaves an absorbing noir-style mystery with traditional adventure game elements and stylish presentation and does it all with a deft touch.

Something fishy is going on at the Hotel Dusk. A variety of shady characters have taken up residence in this sleepy, Southwestern hotel a few days before New Year's Eve in 1979. They are apparently unfamiliar with one another yet are seemingly bound together by one common trait--a dark secret of one sort or another. This is the premise of Nintendo and developer Cing's latest attempt at the adventure game genre on the DS. Cing is perhaps best known for 2005's Trace Memory, another DS adventure game and one of the more genuinely creative uses of the system's touch-screen technology. The same types of unique puzzle-solving mechanics that originated in Trace Memory are found in Hotel Dusk, but the focus here is more on the game's gritty detective noir storyline. This is less a game in some respects than a graphic novel with a number of interactive elements--and that's not a knock against it, either. This is hardly a dumb detective potboiler. This is an engrossing piece of crime fiction that keeps its hooks in you the whole way through, and it's because of this that the slow pace and focus on dialogue over puzzles aren't just forgivable--they're actually preferable.

The salty, alcoholic ex-detective at the center of Hotel Dusk's tale (because it just wouldn't be proper noir without a boozing ex-cop at the helm) is Kyle Hyde. Three years prior to the game's introduction, Hyde was an NYPD detective, working a case with his then partner, Brian Bradley. One night, Kyle gets a call that sends him chasing after Bradley (for reasons unbeknownst to the audience initially). Kyle catches up with Bradley on the docks near the Hudson River and shoots him, sending his body plummeting into the water. Bradley's body is never recovered, and Hyde is booted off the force. A nagging suspicion that Bradley is still alive eats away at Hyde's soul, so he takes up a job as a hired investigator. He's actually a door-to-door salesman, but his boss runs a little side venture, locating things for people who would rather not go to the police about such matters. On this fateful night in 1979, Hyde's job takes him to the Hotel Dusk, a ramshackle flophouse in the middle of Southwestern nowhere. He's tasked with finding a couple of left-behind items for a client but soon discovers that there's a greater, perhaps more sinister force at work within these walls--one that may lead him to his former partner's true fate.

In Hotel Dusk, you hold the DS sideways at all times, using the D pad or face buttons (depending on your dexterity) to advance the cutscenes and using the touch screen for nearly everything else. You lead Kyle around the map by tapping and dragging the stylus ahead of where you want him to go, and when you happen upon an item or person you want to examine, you simply tap an icon in the bottom left corner of the screen to make it happen. For the most part, the gameplay is relatively uncomplicated. When you find an area you want to search, you just tap around on highlighted items and investigate. Periodically you'll need to use certain collected items on hot spots in the environment or even use the DS itself to discover something hidden (for instance, closing the DS to flip an item from one side of the screen to the other to reveal a message on the back).

In these ways, the trappings of old-school adventure games are very much on display in Hotel Dusk (with a modern, DS-specific twist here and there). However, the focus of Hotel Dusk isn't on arcane puzzle solving. It's the story and characters that take center stage and drive the bulk of the experience. So much of the game is about simply walking around the hotel and talking to people. It becomes clear very early on that none of the hotel guests are exactly who they say they are, and a good chunk of the gameplay revolves around paying attention to the lies and half-truths people spit at you so that you can more effectively dig at the truth. Certain conversations will give you the option of multiple questions you can ask a person, and there are times when you can ask the wrong question. Wrong questions will confuse or alarm the interrogated character and will promptly end the game. Finding the right questions is key, and if you play your cards right, you'll discover critical information.

One of the really neat things about Hotel Dusk is how the plot plays out. It's not often that you can praise fiction in games these days, but Hotel Dusk is a clever, stylish, well-spun detective novel hiding inside a DS cart. Hyde's drive to find his missing ex-partner seems a little forced initially, but as the game goes on and clues you in on more details about the mystery and conspiracy that ultimately led to Bradley's shooting, you find yourself getting sucked in. What's more, the characters that populate the hotel aren't just half-written caricatures, strictly designed to move the plot forward. These people have layers to them--legitimate character depth that shines through with each passing conversation. It helps that the dialogue is well written. Every character has a unique personality, and Hyde in particular is highly likable, despite his gruff, sardonic nature. You get exactly the right mix of to-the-point dialogue and stylish touches you'd expect in a piece of noir. There are times when Hyde's Sam Spade-isms will make you laugh, but it's not because they're stupid--it's because they're so perfect for the character and style of the game. You even get a few little detective-story in-jokes, including a moment or two when Hyde starts channeling Columbo to get to the truth.

Along with the characters, the mystery gets deeper and deeper as the game goes on. For a while, it even gets a bit silly. There are enough happenstances and extreme coincidences in this game to make Charles Dickens blush, but it never goes completely off the rails, and for that matter, the game ties everything together nicely in the end. It's not perfect, of course. There are times when the game telegraphs a revelation well before it comes, which leads you to want to shout angrily at your DS as Hyde continues to fumble around the plainly obvious truth. Additionally, the game occasionally gets bogged down with conversation. Very few of the game's exchanges are meaningless in the grand scheme of things, but even when a conversation is on point, it sometimes feels like it's going on longer than it should. You are basically reading line after line of text while this is going on. And doing nothing for several minutes at a time except hitting a button every few seconds to advance the dialogue can be a bit vexing.

There are also a few flaws within the exploratory elements of the game, though they're ones that have plagued most adventure games for the last decade or so. The story itself is quite linear. Sometimes you can discover an object long before you need it, but as far as event progression goes, what you should be doing next is almost always the most recent thing put in front of you. Early on you may not realize this and may find yourself trying to complete other objectives that have been introduced, but these will seem insurmountable because the required people are not around or the needed objects are oddly not working. Once you figure out the progression and flow of the game's chapter structure, you'll fall into the groove and rarely find yourself terribly confused.

It helps that the solutions for puzzles aren't often troublesome. All the puzzles are designed specifically with the realities of this hotel in mind, so you won't find yourself with any obscenely weird objectives or "tie the cell phone to the cat" moments, nor are you likely to find yourself glued to a walk-through for the bulk of the game. Furthermore, the game is quite good about keeping the next person you need to talk to or item you need to find within a relatively short distance of where you left off, so the amount of aimless wandering is manageable. And even when you do find yourself having to trek all over the place looking for the one thing that will advance the story, the fact remains that the hotel isn't that big, so it's not like you ever have to go far or have that many places to search. That Hotel Dusk mostly manages to avoid falling back on ridiculous item hunts and completely illogical puzzle solutions to progress is a godsend, simply because it lets the storytelling drive the game, and the gameplay rarely distracts you from the mystery.

On top of having a great story, logical puzzles, and engaging characters, Hotel Dusk has a terrific visual style. All the environments are done with typical in-color 3D, but the character designs are done with a starkly contrasting hand-drawn style of animation. It's a form of nearly colorless sketch design that makes all the people look like they just stepped out of A-Ha's "Take on Me" music video from 1985. It makes the characters look like they're in motion, even when they're sitting idle. It's such a weird and unique design choice that it ends up fitting perfectly with the overall style of the game. It's difficult to take your eyes off the characters while they're conversing--which is mildly problematic, since you often need to look below them to read the text dialogue.

In this regard, having recorded speech might have been nice, though considering the sheer amount of dialogue contained in the game, it also probably would have been impossible to fit it all on a DS cart. Still, an occasional "hey" or "wait a second" voice sample to indicate specific starting points or tonal shifts in the dialogue would have been a nice touch. Lack of spoken dialogue aside, there isn't much else to the audio. The soundtrack consists of a number of jazzy tunes that often fit nicely with the mood of the situation, though the variety of songs isn't great, so the second you hear one song or another pop in, you know exactly what's coming.

Its few flaws notwithstanding, Hotel Dusk is a nice breath of fresh air for the adventure game genre. It proves that the old point-and-click (or, in this case, point-and-tap) adventure can still hold a bit of water in this day and age when the right amount of care is put into the craft. Hotel Dusk's storytelling is a significant cut above most handheld games, let alone most games in general, and that the puzzle solving and conversational elements play out so intriguingly is a big feather in the game's cap. Of course, Hotel Dusk isn't going to appeal to everyone--its plodding, actionless nature is certain to turn off those looking for more visceral entertainment. However, if the idea of a slow-burning, character-driven noir adventure sounds like it's up your alley, Hotel Dusk is too good to be passed up. 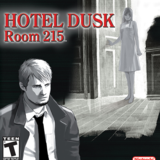 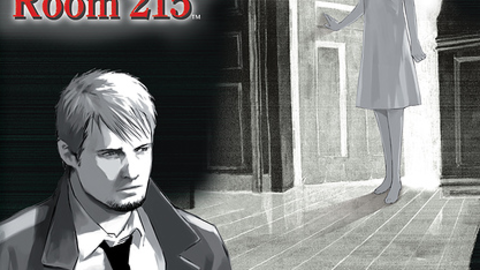 Set in 1979, Hotel Dusk: Room 215 is the story of Kyle Hyde, an ex-cop turned salesman trying to track down a missing friend. In this game the DS is held like a book, and similar to Trace Memory, the DS itself is used to solve puzzles.