Hot Shots Golf: World Invitational proves that more of the same can still be really fun.

Innovation? Bah! Evolution? Who needs it? Hot Shots Golf: World Invitational arrives alongside the launch of the Vita, and aside from a few cursory touch features, it's the same basic experience as its many predecessors. Even with the lack of change, the pastoral greens of World Invitational can suck away hours of your life before you realize it. There's nothing quite like Hot Shots Golf, and it's easy to get lost in the enticing rhythm of your tap-tap-tap rise to greatness. Smooth accessibility opens the door to golfing novices, while the later courses should challenge even the chip-shot savants, and if you crave even more competition, an in-depth online mode lets you strut around like you own the joint. World Invitational is another rendition of the same old song, but with a beat this catchy, you'll be humming along all day.

Striking the ball in World Invitational bears little resemblance to the real sport. Instead of flicking the stick to mirror your club's movement, you simply tap the button a few times to determine the power and accuracy of your approach. It's a pain-free system that doesn't make any pretenses toward realism, yet doesn't skimp on the small details. All of the tangential elements of real golf are realized here, so you still have to contend with swirling winds, sloping greens, torrential rains, and other variables to ensure your head stays in the game. Hitting the directional pad in concurrence with your button taps lets you add a hook, slice, or backspin to avoid hazards, and putting everything together takes time and practice.

The beauty of these mechanics is apparent when you pull off a miraculous shot using all of the tools at your disposal. At the forefront of this appeal are the many audio and visual cues that help you feel empowered whenever you hit a real dinger. When you fill up the power gauge and land your cursor smack-dab in the middle of the accuracy bar, your character whoops with joy. A colored tail extends from the zooming ball, and you're treated to the rainbow-colored font extolling your "Nice Shot!" From there, dramatic camera angles let you watch the flight of your ball in style. None of these different pieces are especially unique, but the combination elicits a strong emotional response that urges you to continue playing.

World Invitational overflows with intangible rewards, but there are also oodles of tangible prizes to keep you striving for lower scores. Good shots and high placement in tournaments give you points to spend in the golf shop, and there are enough worthwhile unlockables to keep you engaged for dozens of hours. New characters along with clubs and balls with unique attributes are the showcase offerings, and there are plenty of treats that go beyond these staples. The most interesting of these are new options in how your swing is controlled. The two most easily digestible varieties are available from the get-go, but if you want to move past the simple curved meter, you're free to do so. There are also new outfits to unlock for those who want to dress their favorite characters up in a garish (or snazzy) ensemble and the expected soundtrack and concept art unlocks for those who crave all that is Hot Shots.

All of these perks add plenty of reasons to keep playing, though the biggest draw is found on the courses. Things start out on the easy side in World Invitational. Cruising through the first few rounds should be a snap for anyone who has prior experience with the franchise, and even newcomers are ushered in with proper courtesy.

It's when you unlock the tougher courses that the beauty of the elegant controls is fully realized. Greens slant at chaotic angles, ensuring any shot longer than a yard or two requires careful concentration. Houses, windmills, and other structural hazards block the easiest route to the cup, though you could test your luck by trying to go over (or through) them. Abrupt cliffs and ill-placed lakes threaten to inhale your ball if you come too close, and volatile weather makes you fearful of the metal lightning rods strapped to your back. There's no doubt that World Invitational is difficult, but it stays fair, and you're usually so close to victory you can't help but retry one last time.

If things become too difficult, you can switch to easy mode when you're selecting which tournament to enter. The hellish bunkers and chaotic weather conditions won't be affected by flicking this switch; rather, your artificial opponents just perform slightly worse. It's a smart way to keep the core elements of World Invitational intact without making the game so frustrating that you give up completely. One thing that would have been appreciated is the option to quickly restart. If you find yourself ringing up embarrassing bogeys, you have to quit out to the main menu to start over, which takes a minute or two as you sit through load screens. Considering how tricky this game becomes, it would be nice if you could just immediately restart instead of having to suffer through that wait.

Hot Shots Golf started on the PlayStation many moons ago, and though the gameplay hasn't changed, it's a great fit for a portable system. You can finish an 18-hole round in roughly 20 minutes, and even if you can't quite wrap up a tournament before your train ride finishes, you can easily halt your progress mid-round and finish up at a later point. Considering how difficult later courses become and how many unlockables there are, just being able to make slight progress wherever you are is a huge bonus.

There are a few touch features thrown in to remind you that, yes, you are playing a game on the Vita. If you swirl your finger on the back panel you can check the distance and surface area of nearby parts of the course, which isn't very useful but does let you satisfy your curiosity. By squeezing your character between the front and back panel, you can pick him or her up to adjust where the tee-off point is. Again, this isn't often necessary, but it sure is cute. The character squirms as your godlike fingers dangle him or her in the air, so it's worth doing just to show off your prodigious strength. Another slight perk from the touch-screen integration is animal taunting. See that squirrel hanging out by the hole? Give it a quick jab and watch it scurry away. Yes, none of these uses are particularly inventive, but they do elicit the occasional smile and won't detract from your enjoyment.

Ample single-player content should keep even long-distance commuters occupied for quite a long time, but if you crave more competition, multiplayer serves its role well. You can challenge your friends in either online or local games, and both work without any technical hiccups. There are plenty of options to mess around with, so you can set a limit on how quickly your opponent has to shoot, where the pin is placed, if you can put spin on your ball or not, and many other variables. The Daily Tournament is also a nice bonus. You play these courses alone, but you post your scores to an online leaderboard, so you have a new challenge to measure up to every day. Multiplayer is not one of Hot Shots' strong points because you're ultimately playing against yourself and the course more than other players, no matter which mode you choose. But there are enough options in World Invitational to give serious Hot Shotters a viable way to extend the life of this game even further.

Clap Hanz has the Hot Shots formula down cold, though its unwillingness to mess with the formula is the only blemish to be found. The well-designed courses complement the controls beautifully, urging you to try your hand at the many complex shots in order to lower your score. But because this game does so little to differentiate itself from previous games in the series, it can easily stumble into a predictable rut. Hot Shots Golf: World Invitational doesn't push the Vita in unique ways nor does it push digital golfing to a new plane. But won't even care about those things when you're trying to sink an important putt on the 18th green. 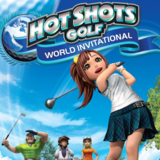 Hot Shots Golf: World Invitational proves that more of the same can still be really fun.