Fore! can be a serviceable golf game, though if you've been playing any other modern golf game, you'll likely find this one's mechanics and presentation to be a bit dated.

Hot Shots has always offered a pretty straightforward game of golf, with realistically rendered courses and its motley crew of oddball duffers accounting for much of the series' goofy flavor. Fore! maintains this tradition, and the gameplay is, for all intents and purposes, identical to past Hot Shots games, relying on the same three-click, power meter-based swing mechanic. This mechanic remains functional and can prove challenging, especially when you get to the putting green. However, it does nothing for simulating the tactile aspects of swinging a golf club. There is something to be said for the familiarity of the digital swing mechanic, but at this point it feels like Hot Shots is bound by tradition rather than progress.

Fore! makes a few additions to the modes of play available, but it still feels a little stripped down. For the single-player game, there are four basic options. You can choose the versus game, which puts you one-on-one with an artificial intelligence-controlled golfer, and if you can beat the players in match play, they'll become selectable characters in other areas of the game. Similarly, the tournament mode puts you in competition against a field of 29 other golfers, with the goal of being the player with the lowest stroke count at the end of the 18th hole. The mini mode is about as wild as Hot Shots has ever gotten in terms of actual gameplay, though it still feels pretty tame. Mini mode gives you the option to either play a nine-hole course of par-three holes or play mini golf. The mini golf can actually be quite enjoyable, as your score is not only tied to how many strokes you take, but also to how far the ball actually travels (the greater the distance, the more points you earn, which forces you to think rather creatively about your shots). The game also offers a fairly basic suite of multiplayer options, allowing up to two players to compete in match play and up to four players to compete in the stroke or mini modes.

The biggest enhancement that Fore! holds over Hot Shots Golf 3 is the inclusion of online play (HSG3 featured pseudo-online support by way of an online leaderboard). The online mode is fully featured, letting you play in one-off games with another player where you can do some pretty extensive customization of the conditions and rules of the game, or you can compete in large-scale online tournaments. It's all fairly well-executed, and it is one of the few distinguishing traits that make Fore! recommendable over the last Hot Shots. All said, there's nothing really wrong with the modes of play available in Fore!, but save for the online mode, there's also nothing particularly exciting either.

Hot Shots Golf Fore! includes an extensive new roster of characters and a handful of new courses, though if you didn't already have an intimate familiarity with Hot Shots Golf 3, the two games are virtually indistinguishable in terms of the graphics. If you are familiar, though, you'll notice that the courses have the same clean, quasi-realistic look to them, and the golfers, while a bit more bizarre in design, retain the fairly consistent bobble-head proportions (though an up close inspection will reveal that the character textures are a bit more detailed). The game occasionally shows a little bit of style outside the zany characters, such as the corona effect, which is when you swing powerfully off the tee, or the little bits of comic book-style sound-effect text that will pop up on the screen when your ball makes contact with specific pieces of the course. Fore! stays steadfast in its dedication to the design ethic of the series, which has been familiar for a while, but it is just now beginning to feel a little stagnant.

Hot Shots plays the cute card pretty heavily in its presentation, but things have gotten a little out of hand in the sound design. All of the golfers and caddies have a few non sequitur sound bites that they'll spout out at the beginning and end of every swing, and they have a habit of all speaking at the same time, which creates a cacophony of conflicting caricatured voices. The fact that the actual fidelity of the sound bites is inconsistent doesn't make things any more tolerable either. The random quips that fly out of the characters' mouths can occasionally be odd enough to prove amusing, but largely it's just grating. The music is a bit more consistent in quality, though its upbeat CasioTone-style instrumentation just makes the whole package seem that much more cloying. You can tell that Clap Hanz thought the funny voices and corny music would make for a kitschy, ironically enjoyable experience. But you'll probably think this wasn't a good decision.

With so much carried over and so little that is new, it seems like Hot Shots Golf Fore! assumes that you didn't play Hot Shots Golf 3. If that is in fact the case, then Fore! can be a serviceable golf game. However, if you've been playing any other modern golf game, you'll likely find this one's mechanics and presentation to be a bit dated. Regardless, Fore! gives the feeling that Clap Hanz has been spinning its wheels, and with EA's Tiger Woods PGA Tour series fine-tuning the action every 12 months as well as introducing more players and more gameplay modes, such complacency is dangerous for the future of Hot Shots. 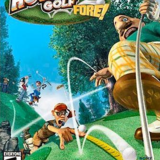 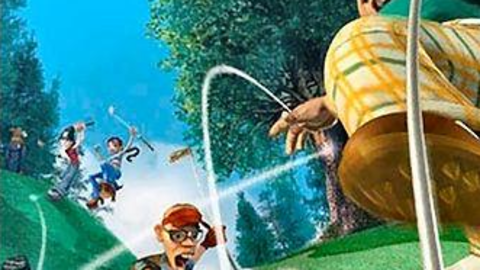 Fore! can be a serviceable golf game, though if you've been playing any other modern golf game, you'll likely find this one's mechanics and presentation to be a bit dated.