There are plenty of bubbly Hooters waitresses, but not much in terms of gameplay.

Hooters: Road Trip is part of Ubi Soft's value-priced software line, which offers the thrifty shopper full-version games for about $10. Much like the arcade classic Cruisin' USA, Hooters: Road Trip gives you a series of stages to race through, and each one is themed to fit a familiar US locale. Each stop along the way also marks the location of a Hooters restaurant, where girls in tight white T-shirts and orange hot pants are happy to serve you heaping helpings of buffalo wings and beer. The introductory movie gives you a complete look at what's to be expected from Hooters: Road Trip--there are plenty of bubbly Hooters waitresses, but not much in terms of gameplay.

Once the actual racing begins, you'll be amazed that this is a late-generation PlayStation game. Racing games have looked better than Hooters: Road Trip for years now, including those at or near the PlayStation's launch. The car models are remarkably featureless, and they're quite blocky and made up of a low number of polygons. The relatively sparse terrain, like the cars, is quite jaggy when it finally shows up on screen. The frame rate is steady, likely due to the game's remarkably short draw distance, which is marked by excessive amounts of pop-up. You'll feel like you're racing to catch up with the road divider, which doesn't reach the game's horizon, instead constantly redrawing itself not more than 20 feet ahead of your car. When newly unlocked cars are unveiled, you'll be able to see their tires clip through the road beneath them. The game's soundtrack, which is composed of a handful of original rock tracks, is pretty much what you would expect from the title. The songs, while inoffensive, don't stand out, and the game has a nagging tendency to replay the same track over and over again throughout a course, despite your selection of the random feature. Horn and collision sound effects round out the game's audio features, but they're fairly muted and poorly recorded.

While Hooters: Road Trip is quite bad graphically, its controls are even worse. For some reason, the game's car statistics have interpreted good handling ability as "turns so sharply as to be uncontrollable." Unless you're playing with the worst-handling cars in the game, you'll be hard-pressed to do anything but swerve left and right, fighting against the controls to try to avoid smashing into the guard rails. Once you've selected or unlocked one of Hooters: Road Trip's better-handling cars, then the simplicity of the game is revealed. Holding down the accelerator and just smashing through turns and other cars will still win you first place in most races on the default difficulty level. This simplicity is due in no small part to the game's lack of a realistic physics engine. A car roaring by at over 110mph can smash head-on into an oncoming semi, but the only consequence will be that both vehicles will come to a complete stop in front of each other. The tracks are also remarkably simplistic in design, which may be the result of the developer's attempt to emulate the real roadways of America, but in fact ends up being a mind-numbing bore.

Sticking with the game long enough to finish every race may be rewarding for some, as after completing a race you're able to watch a Hooters waitress from the local branch reward you with a smile, a wink, and a greeting such as, "Hi y'all! Welcome to Georgia! How ya doin', sugar?" Details of your trip, including location, your finishing time, and what leg of the course you're on are conveyed on the back of a nicely themed postcard. Completing all the races in a particular course, or road trip, will show you a winning video clip, where, if you placed first, you can watch a troupe of Hooters girls in bikinis cavort on the beach after clapping and whooping over the fact that you "came in first place! Wooo!"

If Hooters: Road Trip didn't feature prominent branding in its menu screens, then you'd have been hard-pressed to find evidence that this wasn't just another poorly executed racing game. The courses are bland and utterly featureless, with nary a billboard or roadside restaurant in sight. It would stand to reason that a game making heavy use of a restaurant license would go to great lengths to ingrain its brand name into the player's consciousness, but once the racing has actually commenced, you have no indication that this is a licensed game. Judging from appearances, Hooters: Road Trip probably began as a quickly produced racing engine that was slapped together with a small assortment of video clips to publish a value title fit only for distribution in bargain bins or as part of restaurant promotions.

The Hooters chain of themed restaurants describes itself as "delightfully tacky, yet unrefined," but as far as this game is concerned, a heaping dose of refinement is sorely needed. The very brief FMV sequences can be quite hilarious to those with odd senses of humor, but sadly you have to sit through several minutes of poor racing to watch them. Hooters: Road Trip unfortunately proves that, as the adage goes, you get what you pay for. 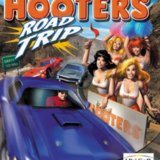 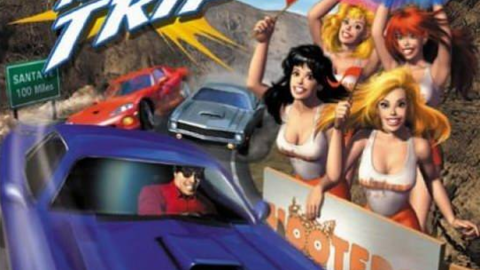 There are plenty of bubbly Hooters waitresses, but not much in terms of gameplay.