Homeworld is both an excellent game and one that may well reshape the entire real-time strategy genre.

Relic's Homeworld is the sort of game that can inspire unbridled hyperbole in game reviewers. With its stunning 3D engine, uniquely challenging gameplay in both single- and multiplayer modes, great audio, and terrific story, Homeworld is both an excellent game and one that may well reshape the entire real-time strategy genre.

It begins with an epic discovery: An ancient starship, buried deep beneath the sands of your home planet Kharak, contains evidence indicating that your people descended from aliens who colonized the planet many centuries ago. Spurred on by this discovery, your people construct a massive mothership with hyperspace capabilities and undertake an expedition to find their true homeworld. However, you complete your first hyperspace jump only to run smack into a swarm of hostile aliens, which proceed to reduce Kharak to a burning wasteland. Now, with only the mothership to call home, you must lead the fleet onward to your fabled homeworld, exacting vengeance for Kharak along the way.

Most of the plot unfolds by way of elaborate cutscenes created using the game's 3D engine. The game also makes use of some slick hand-drawn animation to convey other elements of the story. These black-and-white scenes have a simple but gritty look to them, and they work exceptionally well with the flashy 3D cinematics.

Homeworld's gameplay is in fact fairly similar to any tried-and-true real-time strategy game. You have a fleet under your command and must guide it through a series of 16 missions by building more vessels, researching new technologies, and harvesting resources from asteroids and dust clouds.

However, in spite of the basic formula, Homeworld manages to feel like a very different breed of game. Your ships and resources carry over from mission to mission. This can result in very different playing habits designed to preserve your precious fleet. After all, it's the only one you have. For example, you'll come to rely on vessels like the support frigate to repair your damaged ships so they are ready for the next mission. Similarly, you might find yourself sticking around after completing your mission goals to harvest every last ounce of space dust available. Thankfully, Homeworld lets you do this sort of thing, because you control when you exit each mission regardless of when and how the mission goals are accomplished.

But the most obvious difference between this and other real-time strategy games is the true 3D nature of the gameworld. You're in deep space, after all, so there is no restriction on the direction in which your units may travel. As a result, you'll have to learn to think and move using three axes at all times. This can be extremely confusing if you jump right in, which is why you ought to go through Homeworld's excellent tutorial regardless of your experience with real-time strategy games. One thing the tutorial doesn't teach you is the best way to keep track of your units once a battle begins. Though you have numerous options for organizing your ships - including a variety of formations and three different attack styles - it can be quite easy to scatter them across the galactic map if you're not careful. The main culprit here is the convoluted 3D movement command. In order to move your ships along the Z-axis, you must first click on an X-Y destination, then hold the shift key and move the mouse to indicate the distance up or down that you wish your ships to travel. Be warned that this system can be incredibly difficult to master, especially if you don't take the time to line things up perfectly.

Fortunately, you won't mind retrying some of Homeworld's missions a few times until you get them right, because you never get the sense that the computer is cheating you. These missions are challenging, especially towards the end of the campaign, but they are fair. Even so, you may be put off by the complete lack of a difficulty setting.

You'll also enjoy playing Homeworld repeatedly because it has some of the most impressive graphics ever. This 3D engine is stunning, with an acute attention to detail that is staggering. Every ship, from the tiny scout fighter to the lumbering heavy cruiser, is amazingly detailed, right down to markings on the hull and individually animated gun turrets. One of the coolest features in the game is the ability to zoom right in on a single ship and follow it through a battle - every turn, maneuver, and shot fired is brought to life, and you get a front-row seat for all of it.

The ship design itself is also pretty impressive. And though the two sides in the conflict have nearly identical arsenals (there are only two unique ship classes per side), each has a completely different stylistic approach that is consistent throughout the fleet. Weapons effects are suitably spectacular, and explosions are also very cool, especially when the doomed vessel is penetrated by a beam weapon as it blows up - an effect that recalls those great ship explosions from the old Star Blazers cartoons.

The audio in Homeworld is just as impressive as the graphics engine. The new-age musical score may not appeal to everyone, but it does a great job of setting the whole "space is really, really big" mood. The unit acknowledgments and sound effects are equally good, though it can be difficult to determine which of your units is asking for more fuel when the call comes in during a heated battle.

Homeworld's multiplayer support is excellent. The game lets up to eight players compete over the Internet via WON.net. LAN play is also provided, with both IPX and IP networks supported. In multiplayer matches, you can fully customize the game settings, including the presence, skill level, and hostile tendencies of any AI opponents. A skirmish mode is also included if you only wish to play against computer opponents. Resource availability can be modified, and harvesting can even be deactivated completely. The alternative is a periodic infusion of resources for all players. Regrettably, some players have experienced random drops and crashes during online play, and the game tends to really slow down or shut down completely if you throw too many ships into the mix.

Homeworld does have a few other issues that deserve mention. There is no way to tell how much damage an enemy ship has sustained. Even though your own ships have clearly visible health bars, the status of enemy ships remains unknown until just before they explode, at which point they begin to smoke and burn. And while you can play the game as either of the two warring parties, the single-player campaign is exactly the same for each side. It seems like Relic really dropped the ball here, since even a perfectly parallel campaign would have been a welcome diversion - and a way to extend the life of the meager single-player game. In fact, an opposing story with an equally positive spin on the conflict would have been downright cool.

Even so, any complaints about the basic design or mechanics of Homeworld are minor at best. This is one of the best games you'll see this year: The phenomenal 3D engine, the great story, and the stellar gameplay all combine seamlessly in what will surely become a longtime favorite for many gamers. 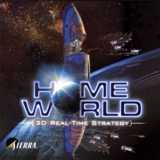 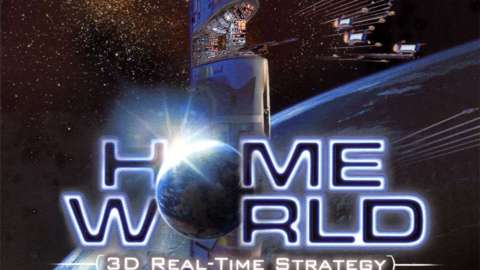 Homeworld is both an excellent game and one that may well reshape the entire real-time strategy genre.