Sailors on a becalmed sea.

Outer space has been famously referred to as the final frontier, but it's a well-worn setting in video games at this stage--even in real-time strategy games. Yet Homeworld refuses to be outdone, beautifully capturing the loneliness of the black void, and then disturbing its eerie allure with the light trails of starfighters engaged in conflict. Returning to this universe in Homeworld Remastered Collection illustrates the series' timelessness. The Homeworld games--and the original in particular--are not just classics in our mind, but classics in practice, standing tall beside any strategy game that dares draw comparisons by being set deep in the cosmos.

Like many games set in space, Homeworld and Homeworld 2 remain attractive even through a modern lens, though directly comparing them to their remastered versions reveal their ages. You can still play those original versions in this remastered collection, though the vibrancy of the newly textured ships and sumptuous backgrounds are an inescapable lure. The mothership--your base of operations in any given Homeworld mission or skirmish--is a particular wonder. It creates a striking parabolic silhouette against the starry background, and its center pylon, which is covered with individual light sources, looks like it must house a vast network of engineers and operators. At least, that's true of the original's mothership; Homeworld 2's vast vessel fills in architectural spaces left open in the original, and looks more structurally sound and elegant, prizing practicality over mystery.

This sense of mystery is paramount to Homeworld's success. The song by Yes that closed the original Homeworld is gone, though I hardly miss it. The game's true sonic successes were the work of composer Paul Ruskay and an audio team that created a wondrous sound that far surpasses the science fiction New Age cliches that occasionally plague games set in space. The Turanic battle music remains a highlight: Rhythmic drums and nasal reeds pierce through droning electronic tones, impressing upon you the otherworldly nature of your newfound foes--quite a feat given a setting that is, by nature, already otherworldly. Individual sound effects take on similar meaning. Entering and exiting hyperspace emits a sustained, pulsing buzz that becomes the series' call to adventure. The hushed groan and persistent beeps that arise when you press the spacebar to view the overall map emphasizes your place as a commander, drawing parallels to undersea exploration by evoking its sounds. This is iconic audio, immediately recognizable to anyone fortunate enough to play.

You may say that it is the gameplay that matters, but this collection's look and sound is vital to each mission's overall feel. Just as the soundtrack slowly unfurls, so too does resource collection. It's a sensibly measured start, given the state of the RTS when Homeworld was released in 1999. Action wasn't typically immediate; World in Conflict hadn't yet been made, and the action-first mentality had yet to overwhelm the genre. This progression is entirely suitable for Homeworld. There's a dreaminess to commanding your resource collectors to mine the nearest asteroids while you cue up your build order and scout out nearby space. Your remaining units transfer from one campaign mission to the next, and reaching your mission objective takes additional time. This gives you a chance to zoom in and admire your bombers as they flit about, and keep an eye on your capital ships as they meander towards their targets.

Returning to this universe in Homeworld Remastered Collection illustrates the series' timelessness.

Engagements are not over quickly in the remastered original. Even when one force is sure to overpower the other, combat is sustained and vibrant. Swarms of corvettes look like flies buzzing around their quarry, though combining individual units into strike groups makes it easy to keep track of even the lowliest scouts. Once the big guns arrive, the comparisons to naval combat become more pronounced: Frigates line up like battleships, focusing their fire on the enemy's most powerful vessels. Don't let the similarities to naval combat fool you, however. You utilize all three dimensions of space; The gameplay map is an entire sphere, not a 2D grid that fools you into thinking the Z axis has meaningful repercussions on gameplay.

Mission pacing builds gradually, requiring you to manage multiple strike groups and be cognizant of each unit's strengths and weaknesses. Some missions are duds, such as a frustrating defensive objective that requires you to destroy asteroids as they approach the mothership. It's a difficult mission, but it's also flat and uninteresting because the tempo remains constant--and because asteroids make for boring enemies when there are entire battalions out in space waiting to be demolished. On the other hand, successfully rescuing friendly forces from a sea of red icons is a rewarding accomplishment, as is wearing down an opposing mothership until it explodes in a flash of particles and fire. (It may not be a realistic depiction of space, but it is certainly a colorful one.) Homeworld introduces new technology and units at a manageable rate, so while there are challenges to face, you're always equipped with the knowledge you need to triumph.

The action isn't exactly as you remembered, as it happens. Perhaps the biggest change is the loss of fuel as a strategic consideration. If your memories of the original game's specifics have dissipated, this may not be a bothersome loss, but infinite fuel means fewer nails bitten when the action heats up. It also makes the presence of Kadeshi fuel pods less sensible: why does the enemy still need to be concerned with refueling, when you do not? Formations don't work as you remember either, with the biggest loss lying with the sphere formation, which now no longer allows you to embed larger ships within an orb of death. Repair ships, meanwhile, must be micromanaged, as they cannot be trusted to provide services of their own accord. This is the original Homeworld viewed through the filter of Homeworld 2, which implemented changes to pathing and projectile damage that don't always feel logical in the earlier game.

Moving from Homeworld 1 to Homeworld 2 is a smooth transition, in any case. There are differences, of course: Homeworld 2 was a full-fledged sequel, as opposed to the Cataclysm add-on, which supplemented the first Homeworld, and is sadly missing from this collection. You do not build individual fighters, for instance, but multi-fighter squadrons, and there are more upgrade branches to consider when determining how to spend accumulated credits. Some changes are for the better: You can target individual ship systems, for example, shutting down the opposition's fighter facilities so that they can no longer produce strike craft, or slowing their roll by demolishing the engines.

This is the original Homeworld viewed through the filter of Homeworld 2, which implemented changes to pathing and projectile damage that don't always feel logical in the earlier game.

Homeworld 2 cuts the original game's post-game resource collection as well, slurping resource units up automatically when the mission ends. The remastered Homeworld allows you to do this as well, granting you nearby resources when you auto-dock and get on your way, though it doesn't always collect everything from the map, so you may still be inclined to send out your collectors to reap. This process isn't exciting, but I find it soothing to relax in this way after a tight series of battles, and then to watch my fighters and ion frigates make their way back to the mothership for manual docking. It emphasizes the melancholy nature of the Hiigaran quest for identity, much of which plays out in poignant black-and-white cinematics. There are scenes of great loss that earn even greater power when the even-voiced narrator breaks his monotone ever so slightly. The Homeworld story is sorrowful at heart, making the coldness of surrounding space a surreal contrast.

You can compare the originals with their remasters in this collection, and if you have the gumption to sign up for yet another unnecessary online service, you can also play the multiplayer beta, which, because it is officially still in testing phase, falls outside of the scope of this review. The Homeworld series' legacy, however, has always lain within its story-focused campaigns, whose excellent action and inherent beauty endure and excel, even in light of the 16 years that have passed since the original's arrival. It is a huge universe out there, but Homeworld Remastered Collection makes a great case for asserting your presence within it.

View Comments (65)
Back To Top
8
Great
About GameSpot Reviews 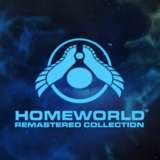 Homeworld is one of Kevin VanOrd's lifetime top-ten games. He has played it and its sequel many times, and he was happy to again revisit its epic strategizing. For this review, he finished both campaigns, with took him about 16 hours in all, give or take, and played a number of one-off skirmishes.