Veterans of the first game will also be quick to notice some interface changes and gameplay enhancements. However, Homeworld's beautiful graphics, top-notch sound, and 3D play mechanics remain intact.

Homeworld was an excellent game that brought real-time strategy into the third dimension. The great graphics, incredible sound and music, and true-3D gameplay made it a favorite among strategy fans and critics. Nevertheless, the game did have a few problems, even though it was widely considered to be an excellent first effort from Vancouver-based developer Relic. Relic has since passed the reins of Homeworld to another fledgling developer, Barking Dog Studios, which has created the stand-alone expansion Homeworld: Cataclysm. It attempts to fill the gaps in Homeworld by providing deeper gameplay without compromising the essence of the game, which is to portray awesome ship battles in deep space. Homeworld: Cataclysm eschews the setting of the original game and offers a new 17-mission campaign, a new faction that has a lineup of unique ships, and a completely new villain to fight. Veterans of the first game will also be quick to notice some interface changes and gameplay enhancements. However, Homeworld's beautiful graphics, top-notch sound, and 3D play mechanics remain intact.

Cataclysm begins 15 years after the conclusion of the events in Homeworld. The unified front among the Kushan people has disappeared now that they have reclaimed their homeworld, Hiigara, and split into their ancient, bickering clans. You play as one of the disenfranchised clans, the Kiith Somtaaw, who has had to seek its fortune in deep-space mining. While in space, you answer a distress call from a fellow Kushan vessel under attack by remnants of the Taidan empire, and you are thrust into a role that takes you from being just an innocent mining clan to being the saviors of the galaxy. This is how the single-player campaign starts, and it ramps up quickly, as you face successive missions of increasing difficulty and significance. Although you start out helping a fellow clan fight Taidan imperialists, you soon stumble upon a greater threat that has descended upon the divided galaxy.

This great enemy is an ancient techno-organic virus called the Beast, which assimilates ships and turns them into a ravenous collective - not unlike Star Trek's Borg. Slowly, the collective intelligence of the Beast adds to its power by assimilating Taidan, Kushan, Turanic, and even Bentusi ships into its armada. You discover this information early on in the game. Soon you must rush across the galaxy to save fellow clans from being absorbed, all as you fight Beast ships, hunt down lost vessels, and learn more about where the Beast came from - and how to stop it.

The missions of the single-player campaign are of similar quality to those in Homeworld. Every mission has changing objectives and an ongoing story that gradually reveals new developments that will surprise you and often catch you off guard. However, this suspenseful quality proves to be a constant source of frustration, as it reinforces the puzzle-like mission design that was also found in the original Homeworld. Your first time through a mission is often just an intelligence run, as you find yourself tentatively probing each new area to see where the surprises are and what the location and makeup of your enemies is. Inevitably, you'll be ill prepared to deal with the change-ups, and you'll need to restart - but then you'll be armed with the knowledge gained in your initial attempt at the mission. This trial-and-error approach that's often necessary to adopt to successfully complete the game's missions will undoubtedly frustrate some players, so it's advisable to save your game often during each battle. Fortunately, the missions themselves are interesting and well designed, albeit quite difficult, and the latter missions especially are more rewarding than the rote missions in the latter half of Homeworld. However, Cataclysm does lack the distinct sense of wonder you may have experienced in Homeworld, such as when you first encountered the Bentusi or when you entered the Garden of Kadesh. The cinematic and mysterious sense of the original Homeworld isn't quite intact in Cataclysm, but the game's linear campaign is nevertheless well paced and the gameplay more substantial.

The high difficulty of the Cataclysm missions indicates that the game is for Homeworld veterans, although newcomers who don't mind frequent restarts will still find the game rewarding, if a bit more frustrating. The excellent tutorial does a good job of teaching you the basics, but the interface will still be daunting for those new to the real-time strategy genre. What makes the game's missions especially hard is the Beast itself, which will assimilate your ships in mid-mission, thereby diminishing your forces while simultaneously bolstering its own by turning your forces against you. This prospect will force you to play much more defensively and deliberately than you may be used to, and it calls for much more diligent control of your ships. It is a welcome consideration to the gameplay in a genre that often only requires that you select a large group of units and send them toward the enemy using a general attack command.

Aside from the new campaign, the other big feature in Cataclysm is the force of the Somtaaw Kiith itself, which boasts an all-new array of ships and technology. The Somtaaw have more special abilities and more upgrades than the races in Homeworld. You can research upgrades to your ships, not only to give them better armor and weaponry but also to give them special abilities. For example, the standard acolyte-class fighter can gain missiles and linking technology. The latter technology lets two acolytes link up to form a frigate-class ship, which can in turn gain a special ability called the EMP blast, which can temporarily stun enemy vessels. Another ship, the mimic, can disguise itself as an enemy ship or even as an asteroid so that it can infiltrate enemy lines and then kamikaze into unsuspecting enemy vessels. In fact, several missions in the game require that you use the mimic ship and its unique ability to sneak behind enemy fortifications. Several other ships have other unique abilities that make the Somtaaw fleet more fun to use than the old Kushan and Taidan ships in Homeworld. Ships in Cataclysm also gain experience as they rack up kills, which gives them bonuses to attack and damage, although never to the point that it seems to significantly change or unbalance combat.

In addition to new ships and technology, the concept of supply has been added to the game. This puts a clear limit to the amount of ships you can have in your fleet, unlike in Homeworld where the unit limit was ambiguous and artificial. Now, different ships take up different supply units; for instance, a dreadnought takes up 80 supply, while a recon ship takes up just two supply. Like in Blizzard's Starcraft, this means you can't just crank out a swarm of superships, because you'll need to balance your fleet's makeup with due consideration for your supply limit, which can be increased by building support modules and carriers.

Your Somtaaw command ship also operates a little differently from the Homeworld mothership. For one thing, it can actually move, and you'll find that in many missions, you will want to navigate your ship through the map to get to victory objectives faster. Also, the command ship is now modular, meaning you can build different supplemental modules to make the ship more useful and powerful. You can build supply modules to support larger fleets, an engineering module to research engine and drive technologies, a weapons module for advanced weaponry, and so on. The modularity of your command ship means that technology research is now divided into a five-branch tree, which along with the many new special ability technologies, different ships, and upgrades means Cataclysm is a much more strategic game than Homeworld, which had a fairly linear tech tree. In Cataclysm there are a lot more choices, meaning there are a lot more options for how to play.

The graphics in Cataclysm are gorgeous, especially at very high resolutions. There is now a new pilot view that lets you see through a first-person view from any of your ships, and in this mode, dogfights look spectacular, as laser blasts and explosions light up the screen while fighters and capital ships fill your view. The Somtaaw ship designs are good, though perhaps not quite as distinctive as the original Kushan and Taidan fleets. Unfortunately, the Beast ships don't look very interesting; they're mostly just the old recycled ships with red textures. Cataclysm's sound effects, which were a strong point in Homeworld, also aren't quite as good as in the original, although they are still commendable by any other standards. While every unit now has its own voice and lines of speech, the voice acting is inconsistent throughout the game. The atmospheric music in Cataclysm is subtler than in Homeworld, but still good.

The multiplayer options in Cataclysm aren't that much different from Homeworld's, although now you play as the Somtaaw or the Beast instead of the Kushan or Taidan. It's just as well, since the Beast and Somtaaw clearly outmatch the original Homeworld factions. The game's many new strategic options, and the Beast assimilation ability, should make for more exciting multiplayer matches than in Homeworld, where the two playable sides were very similar.

Cataclysm also features a few less glamorous enhancements that are nonetheless significant, such as the improved interface. You can issue waypoint movement orders now, and you can also access unit information via the tab button, which brings up an information box that displays a unit's hit points, armor, weapon damage, and special abilities. You can also focus on an enemy unit and see its health bar. While Homeworld was deliberately cryptic in the amount of information it displayed, Cataclysm presents all the statistics that strategy players would want. What's even more welcome is the addition of the ability to issue attack, guard, and other commands from the sensors manager, which lets you manage and command your fleet from a strategic overview. These enhancements make controlling and inspecting your fleets a lot easier. Cataclysm also has a time-compression feature, which alleviates some of the excruciatingly slow pace of the original Homeworld by letting you speed up time during lulls in the action or at the end of a mission when all you want to do is just mop up the resources.

Homeworld: Cataclysm adds a lot of depth and strategy to the original game, in addition to an original story and two new fleets, but it preserves the essential gameplay. The missions are well designed, although their solutions are often a bit too puzzle-like, but in general the game plays well and stays interesting. The new faction is well designed, and it has a lot of interesting new ships and abilities, while the revamped interface really does improve the gameplay. Where Cataclysm fails to live up to its predecessor is in production values; the music and sound aren't quite as good as Homeworld's, and the epic scope of Homeworld is also missing. However, although the cinematic quality of the game is a notch below Homeworld, the game itself is more solid. Therefore, fans of Homeworld should certainly try Cataclysm, since it provides all-new experiences and noticeable gameplay improvements. And if you haven't played Homeworld, then Cataclysm is still a good way to introduce yourself to the series, as long as you don't mind a challenge. 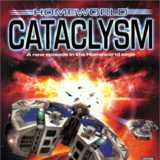