Home Run King is supposed to be an over-the-top arcade sports game, but nothing could be farther from the truth.

GameCube-owning baseball fans may be upset that Sega's World Series Baseball 2K3 was recently announced as an Xbox exclusive, but Sega hasn't completely forsaken Nintendo's console where hardball is concerned. As a replacement, or a stand-in depending on how you look at it, Sega has released its arcade-influenced baseball game, Home Run King, exclusively for the GameCube. Attempting to appeal to the casual sports fan, Home Run King has been pushed by Sega as an over-the-top baseball game that's easy to play. But further inspection reveals a game with fundamental flaws that limit its appeal to both the casual player and the ardent baseball guru.

Normally when a sports game is promoted as an arcade-type game, the rules of the sport tend to get bent. And why not? If you're going to create a zany interpretation of a sport, why not go all the way? But after studying the gameplay modes and rules in Home Run King, you'd think it was the latest installment in your favorite baseball simulation. In addition to the typical exhibition mode for up to two players, Home Run King includes a season mode that can be customized to your liking, a playoffs mode for those who like to go straight to the big time, and a home run derby to practice the big swings that are presumably required to succeed in a game of Home Run King's ilk. There's also a fairly extensive player-creation tool that lets you plant your own likeness in the starting lineup of your favorite team. The rules of the game are the same: three strikes and you're out, four balls and you walk, and three outs and the inning's over. There's nothing madcap about the rules at all.

The gameplay only furthers the lack of wackiness that the rules provide. The only major difference between playing Home Run King and any average baseball simulation is the pitching and batting interface. Like in most baseball games, the primary goal for hitting the ball is to line up your batting cursor with the pitching cursor and time the swing. But how the pitches are selected is a bit different from the norm. Before each pitch, an icon appears in the strike zone, and it looks very similar to a compass, with arrows stretching from a central point in several different directions. Each arrow represents a specific pitch type-- the longer the arrow, the more effective that particular pitcher is with that particular throw. To select a pitch, you simply press the analog stick in the corresponding direction. One drawback with this system is that pitch types are not included in the interface. Therefore, you must memorize the direction that each pitch type corresponds to or sit with the instruction book open to access the key. After a few days, you'll have all eight directions memorized, but it can be annoying in the early stages of gameplay. After a pitch is selected, you can press any button to start the windup. While the pitcher is going through his windup, a small power meter appears next to him. Tapping any button a second time will then set the power of the pitch.

Batting is handled similarly. Before each pitch, you can attempt to guess the type of throw by pressing the analog stick in the corresponding direction. Once the pitch is in the air, your batting cursor's shape changes, depending upon the pitch you selected. If you guess the pitch correctly, the batting cursor turns red, and your chances of knocking the ball out of the park are drastically increased. The lack of an ability to pull the ball or tailor the direction of your hits is disappointing, but this is one area where Home Run King actually resembles an arcade sports game. There are five different difficulty settings in the game, and hitting the ball is fairly easy, no matter which setting. The balls come in slow, and the speed does not change as you increase the difficulty setting. Instead, the direction that the ball flies changes, so you'll find that more balls go to the defense on the harder settings even though you're basically swinging exactly the same. Once you learn which pitches correspond to each direction, the pitching and batting interface in Home Run King works just fine. The ability to choose the velocity of each pitch comes in handy when you're attempting to preserve your pitcher's arm.

Fielding in Home Run King is adequate but not perfect. You can set the game up so that the computer will field for you, or you can take on the responsibility yourself. Fielding ground balls in the infield takes some time to adjust to because the angle switches quickly--so much so that it's difficult to see which infielder has been activated before the ball is skipping into the outfield. Many times, routine fly balls end up dropping for hits because the outfielders are unable to run quickly enough. Another issue is the time it takes for infielders to get the ball out of their glove and make a throw. If your shortstop is playing deep, his chances of throwing out a runner at first are fairly low. Instead of adopting the each-button-equals-a-base throwing scheme found in most baseball games, you must hold the analog stick in the direction of the base and press A to make the throw. This system slows down the transition from fielding to throwing quite significantly and also lets runners get on base when they sometimes shouldn't be. Running the bases is easy enough using the R and L buttons, but the computer is too stupid to make runners tag up for fly balls, so you'll constantly find yourself battling against it to keep your base runner's feet on the bag.

When you think of arcade sports games, visions of flaming balls, players jumping out of the stadium, and oversized heads probably flit through your brain. But this is not the case with Home Run King. It features all the real Major League Baseball teams, players, and stadiums, and it rarely strays from the typical baseball game formula, particularly where its graphics are concerned. Player faces look amazingly accurate--plus, they scream, talk to the base coaches, or blow bubbles. Initially, these small details are quite impressive, but they quickly lose their effectiveness when six batters in a row do the same exact thing. Player faces also have a tendency to glitch during animation, so don't be surprised when a player is smiling one second and has a frown the next or if the shading on his face begins to freak out. Player bodies are boxy, and it's easy to see the polygonal joints in their elbows and knees, but they come equipped with all the special gear they really wear, like arm guards or shin pads.

The stadiums look great, and they are accurately modeled down to every last detail. This is something that can't be said about many supposed simulations on the market. But the crowds and dugouts look awful, with pixilated sprites and low-resolution textures that stand out from the rest of the visual presentation. The animation is probably the game's strongest suit. Outfielders have a multitude of ways to reach out for a catch--infielders jump, turn, and throw in one motion, and base runners even stretch their arms around infielders while trying to reach a base. Home Run King also includes a replay mode that lets you review each play from any angle you choose, but it also makes it obvious that transition animations weren't on WOW Entertainment's to-do list. At times, Home Run King is the most visually impressive baseball game available. But various glitches, some angular character models, and some horrendous textures spoil an otherwise beautiful game.

Sound is probably more essential to a baseball game's atmosphere than with any other sport. Without hearing peanut and hot dog vendors begging for business or the occasional heckler, it's just not hardball. Home Run King includes the organs, public address announcers, and umpires, all of which make watching a live game such an experience, but all the peripheral sounds that you'd hear while sitting in the stands are completely absent. The announcers for the game are terrible--their sentences sound as if they were patched together from a bank of words, and the color commentary is too wordy and often irrelevant to the on-field proceedings.

Home Run King is supposed to be an over-the-top arcade sports game, but nothing could be farther from the truth. Other than the slightly higher number of hits per game, most will have a hard time telling the difference between it and other baseball games advertised as simulations. There are no flaming balls, no alien pitchers, and no 500-mile home runs, but Home Run King still manages to be a fun derivative. If you're looking for a baseball simulation for your GameCube, All-Star Baseball 2003 is still your best bet, but give Home Run King a rental and see if its slightly exaggerated style of gameplay is for you. 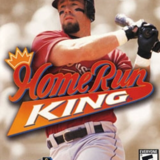