Holy Invasion of Privacy, Badman! What Did I Do to Deserve This? Review

This tower-defense-style game brings some unique ideas and bizarre humor to the table, but is hampered by frustratingly unpredictable units.

Available exclusively as a PlayStation Network download, Holy Invasion of Privacy, Badman! What Did I Do to Deserve This? is every bit as odd a game as its overly lengthy title suggests. A tower defense game at its core, Holy Invasion mixes in elements of ecology and maze building with a dash of off-kilter humor to produce an experience that's more in-depth than many of its tower defense peers. With unpredictable unit behavior, however, it's also far more frustrating.

As with most tower defense games, your objective in Holy Invasion is to prevent an enemy force from penetrating your defenses by setting up the appropriate units to counteract the enemy's abilities. In this case, you play as an evil master of destruction aiming to protect an equally evil general from getting captured by the "good guys." In this case, they are stereotypically squat medieval heroes. Should your general get captured, you still have time to rescue him before they drag him out of your lair and into town.

You construct your lair by digging away tiles of soil to form winding tunnels and open areas, though "dig points" limit how many tiles you can destroy in any given round of play. Along the way, you chisel away a tile filled with "nutrients," thus giving birth to a slime, which is the root of the ecology in Holy Invasion. Slimes both take in and give out more nutrients to other tiles of soil, allowing you to give rise to more slimes. To summon creatures, you simply destroy a nutrient-filled tile of soil. When a creature dies, it spreads nutrients back into the soil. The more nutritious a tile of soil is, the stronger the creature it will deliver when it's destroyed. If you wait until it's noticeably speckled with white, you'll unearth a maggot that matures into a combat fly. If you wait even longer, you'll unleash a lizard soldier--complete with shield and sword--that feeds on maggots and flies.

From the outset, you'll see how the food chain evolves and how you need to balance your army. If you create too many lizards but not enough maggots, the lizards will starve; if you create too few lizards, the heroes will have their way with your pathetic army. Additional creatures in the game, such as dragons, demons, and magic-wielding vampires, all follow similar restrictions and prerequisites, and each species has its own behavioral and movement patterns. Further, you're able to upgrade each creature by spending unused dig points between rounds.

As you strive to manage slimes and nutrients, summon an army of creatures, and design a twisting underground maze, the impressive strategic depth of Holy Invasion becomes apparent. Yet, the erratic behavior of some of your units is problematic and will force you into many frustrating moments. The slimes--which, remember, function as the core of the game's entire ecology--are, according to an early training mission, supposed to behave in a very predictable fashion so that you can guide them around and add as many nutrients as possible to tiles. You might be successful, sure, but a few other things can happen. For example, the slimes might take nutrients instead of give them; slimes might go in a completely different direction from the one you want; or slimes might die but then fail to spread enough nutrients around for any single block to benefit. Traditionally, when you want to build or purchase a unit in a tower defense game, you do just that: build or purchase it. Here, you have to hope that slimes will behave as they should in order to unearth even the simplest of combat units. This is already an irritating issue without even delving into the erratic behaviors of the other creatures.

By completing the training missions and the goal-oriented challenges (which unlock as you progress through the main game), you will slowly learn the tricks to get your creatures to behave how you want them to, but even then, nothing is entirely predictable. A challenge that requires the creation of eight lizards might take several tries to complete, even when following the game's very direct advice word for word, simply because a group of slimes might veer off into an unexpected direction. Sometimes, you'll complete a challenge after multiple tries without having changed your strategy much, if at all, leaving you baffled as to what exactly you did this time to win. At least these challenge missions give you much more specific goals (create Liliths that can give birth in less than five minutes; generate 20 lizard soldiers within five minutes; destroy the incoming heroes by removing only eight tiles of soil), taking away some of the random crapshoot feel of the main game, in which you simply strive to keep your evil lord safe as long as you can in each level.

If you manage to stick with the game long enough to see the bulk of its creatures and characters, you'll be treated to an almanac full of descriptions and images of everything you've seen. Some of the descriptions simply state the nature of the beast, while others provide bizarre anecdotes with nary a useful hint. "Just knock on the door and they'll come out," reads one description of a Brahzuzu Rune. "You won't have to wait long since these guys are paranoid about ding-dong-ditchers and flaming bags of poo." Along with its pixelated, 8-bit title logo and Sega Master System visual style, Holy Invasion's strange sense of humor gives off a unique and baffling aura.

In fact, the game is just nuts, which makes it more of a shame that your unit behavior is so unstable. The humor's there, the concept is sound, and there are loads of missions to take on when you're not feeling the main mode, but it's all made unnecessarily frustrating at times because your army has a bumbling mind of its own. Given more direct control over how you raise an army and units that do what you expect them to, you'd find Holy Invasion to be an intriguing, off-the-wall take on the tower defense genre. As it stands, while the game’s not impossible to recommend, you'll often be asking yourself what evil you perpetrated to deserve this unpredictable army of eccentric creatures. 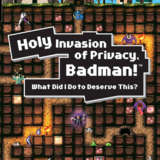 What Did I Do to Deserve This, My Lord!?
Follow 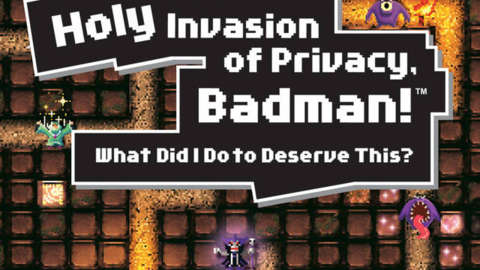 What Did I Do to Deserve This, My Lord!?

Holy Invasion of Privacy, Badman! What Did I Do to Deserve This? is an role-playing strategy game for the PSP that will be available via download through the Playstation Store.