Hohokum shows you respect from the very beginning. Instead of leading with tutorial messages explaining how to make use of the slick and stylized movement, this vibrant, abstract trip lets you experiment with what’s provided to discover how to interact with the world around you. No one tells you to drag the contours of your multicolored serpent through the petals of a towering flower, or collide with the porous edges of a sea sponge in order to affect the nearby wildlife. Each new world presents a medley of subtle environmental puzzle pieces that need to be pushed, pulled, flipped, and correctly bumped into place to create a clear picture, and it takes patience to fit them all together.

The non-linear, experimental gameplay is the greatest strength of this audiovisual jewel, but it’s also the core of its most pervasive fault. At its best, Hohokum provides pure, cathartic bliss through hypnotic movement that’s extenuated by the free-form puzzles. No two worlds are the same, and the creative manner by which you complete them often slap a contagious grin on your face. However, once the heavy dopamine dose dwindles to a drip and your progression stalls, you begin to curse the given respect that was once so cherished. Failing to see the next step forces you to slither through every element of the geometry in frustration to find how to progress, transforming your previously relaxing session into a true test of commitment.

The greatest challenge might come from describing the game itself, though, as most of the worlds in Hohokum are brimming with nonsense. You direct a single serpent, dubbed the “Long Mover,” to sashay from place to place. You can’t attack or communicate with the many people or objects that paint the backdrop, so you’re instead left with no other choice but to bump into things. And once you bump into the right things, a light bulb goes off. Flying over a clay pot sends it crashing to the ground, so what happens if I break all of them? What will that change?

You play with the different pieces until the systems start to become clear, and after completing the given tasks in a world, a fellow serpent with its own distinctive colors and features is freed and sent back to your hub world. There are other secondary “objectives” to consider in each environment, but the real goal here is to find and free all of the serpents.

Credits roll once every serpent is safe, but Hohokum doesn’t push you to progress to the conclusion. There were times when I wondered if I was even working toward a true ending, as the cheerful nature of this often aimless jaunt does its best to keep you in the moment. Each location has a personality all its own, and when you’re barreling through silhouetted lamps that brighten to expose an otherworldly milieu, it’s difficult to think about much else but the brilliant lighting and melodic tones.

Hohokum plays like nothing else out there, and its presentation is just as idiosyncratic. Unearthly critters scurry by as you float between purple mountains and bright yellow monuments. A gem-strewn cave draped in darkness is just a short trip away from a farm with dynamic reds and blues that coat fields of wheat and healthy oaks. The fantastical characters blend perfectly with the make-believe worlds, and the glue that holds it all together is the soundtrack. The reactive electro beats ting, fizz, and buzz as you fumble over items, creating a singular sensory package that sticks with you.

All the worlds are open from the word “go,” giving you what initially feels like endless things to see and do. It’s not necessary to free each and every serpent from the 17 available worlds to have fun with Hohokum, but I like seeing credits roll. I enjoy actually completing a game, and while I understand the appeal of spending 15 minutes after work casually exploring Hohokum’s charming locales, I wanted to get to the end. Unfortunately, that can be a chore.

Exploring all the available options within a given world is a treat, as there’s great satisfaction that comes from the many “ah-ha!” moments that lead to freeing a new serpent. But I found myself unsure of the next destination on far too many occasions. Fresh worlds are accessed by opening portals in previously discovered areas, but without knowing where you should go next or how to get there, you find yourself frantically stretching from level to level without a clear focus. It becomes a boring scavenger hunt that sullies the pacing, and it often forced me to try to interact with objects in less obvious, more tedious ways in an attempt to crack the code.

It’s easy to get lost in Hohokum’s enchanting scenes, but it’s just as easy to come crashing back down to Earth when you lose your way.

The silky-smooth flow of Hohokum amplifies these aggravating moments. How and in what order you want to complete the worlds is up to you, but you settle into a soothing rhythm once you begin to understand the systems. It’s easy to get lost in Hohokum’s enchanting scenes, but it’s just as easy to come crashing back down to Earth when you lose your way.

The through line can be frustratingly faint at times, but Hohokum is just too creatively rich to pass up. The vibrant environments are ceaselessly pleasing, and few soundtracks better match their visual counterparts than the pair found in this ebullient playground. Whether you’re carrying citizens on your snake-like back to a Ferris wheel or leading a school of fish through pockets of water, the charm so deeply embedded in Hohokum–even at its most frustrating points–never wears thin. 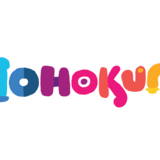 Josiah Renaudin probably works too much, so he can appreciate a game all about relaxation. He’s enjoyed “art” games like Journey and Flower in the past, and completed all 17 worlds of Hohokum during the review process.