Dragons have it uncommonly rough: When players aren't trying to stick a sharp piece of steel between their scales, they're sticking harnesses on them and forcing them to fly around at their bidding. That all changes in Hoard, in which you become a dragon and bathe the countryside in flames while amassing your own hoard of gold. Along the way, you roast scores of knights and thieves seeking to beat you into submission or steal some coins for themselves, and you even have to fight off rival dragons that try to pilfer your stash. When coupled with several elements of real-time strategy games and the general feel of an old-fashioned board game, this simple concept renders Hoard a refreshing and engaging multiplayer game with only a few downsides.

While Hoard offers four gameplay modes, its heart and soul are in the Treasure option. Here you gather as much gold as possible within ten minutes, using the left analog stick to fly about the map and using the right to spew a stream of fire in the target direction. The controls never gets any more difficult than this, but since Hoard’s dragons can’t move and breathe fire at the same time, you find that you have to time your flame breath strategically in the game’s many tight spots. The best target to start out with is the gold-laden wagons that scuttle back and forth between set locations on one of 16 different maps. Should you let these carts arrive at their intended destinations, increasingly elaborate villages and castles will pop up, giving you more to burn for gold but also more hazards to avoid.

Those new dangers include archers and knights that can rapidly drain your dragon's health, requiring you to retreat to your lair to regenerate. There are also thieves that race to your lair to steal your gold while you're away. On the other hand, you can greatly increase your earnings by kidnapping princesses from the royal carriages that appear and fighting off any knights who seek to rescue them within a time limit. Elsewhere, towns will actually start paying you tribute if you leave them intact but destroy their ancillary villages, and you can even win over your opponents’ tribute towns by strategically terrorizing in the same fashion. Later in each match, you also have to face mage towers that shoot powerful beams of energy that cause considerable damage to you and douse any flames you may have started. If you attack the carts, kidnap the princesses, and generally burn everything in sight, however, you are well on your way to winning.

Of course, there's a catch. Dragons can only carry so much gold, and you need to race back to your lair to dump your new riches every time you've reached your limit. Along with your armor, speed, and firepower, your carrying capacity can be expanded with points gained from gold, so you have to quickly choose which stat to increase for each map and situation. In larger maps, for instance, you may want to place points in speed and carrying capacity; in smaller ones, you likely want to build up your firepower and armor first. The single-player option is thus best used to practice your general strategies because the game becomes entertainingly fast paced in multiplayer as up to four different dragons scour the map for gold. Unlike in the single-player mode, there's no option to pause while you allocate points, and you have to decide whether to attack other players (which causes them to drop their gold if you completely deplete their health) or ignore them to focus your attention on increasing your hoard. For assistance, you gain score multipliers by keeping up a steady stream of gold to your lair, and you occasionally encounter power-ups that can slow your enemies, increase your fire damage, or even shield you from enemy attacks.

The other three modes follow these same basic strategies, save for a few changes in focus. In Princess Rush, you race against other players or the system's AI to be first to kidnap 15 different princesses. Knights are particularly powerful in this setting, and it's possible for the full 10 minutes to go by without either side scoring as a result. In HOARD! mode (only available for single-player), you fly around the map simply trying to stay alive as long as possible using gold drops to gain automatic stat increases, with only the option of kidnapping princesses as a means of replenishing your health. Within only a few seconds of beginning, you already find yourself besieged by powerful knights and mage towers determined to bring you down. Lastly, there's also a cooperative mode that allows up to three human-player or AI dragons to build their hoards together. After each round, you are ranked according to gold, silver, or bronze medals, and you lose all of your upgrades from the previous match. Indeed, because each player begins every match with the same stats, you find yourself needing to adjust your strategy several times during a game to stay on top.

Unfortunately, Hoard suffers from an intensely forgettable soundtrack. Instead of the epic sweeps of trumpets and deep drums that usually herald the appearance of destructive fire-breathing dragons (along with an angry choir intoning in Latin or intimidating gibberish), the score instead sounds like it belongs in a mediocre role-playing-game tavern. The title screens and menus also feature incongruous electronic music that suggests an attempt at conveying some sort of retro ambiance, but any effort falls flat because none of the game's visuals really follow the audio's lead. This inattention to audio also carries over to the characters themselves, with the burning knights and the kidnapped princesses often sounding as if their voice files were lifted directly from Fat Princess.

While decent enough and appropriate for real-time strategy games, the visuals for each map lack any significant variation aside from the placement of lairs, castles, and the like. The tiny models also make it often difficult to appreciate your dragon's path of destruction or any other details. You may find yourself squinting in frustration at the absurdly tiny text provided for tutorials and other messages as well, which gives the impression that Hoard should only be played on a 53-foot-tall IMAX screen. Still, one commendable feature of Hoard is its board-game setting, which sets the borders of the game's landscapes against the backdrop of a wooden table. In some maps, this wood actually becomes a part of the gameplay area, giving the distinct appearance of a board game that has magically come to life.

In the end, Hoard's great strength is its multiplayer mode. With 16 different maps to choose from and consistently unpredictable short matches, Hoard can easily take up several hours of your free time and find you returning for more the next day. This is one of those games that is best played with friends on headsets, and you can also enjoy random matches online as you drain the hoards of your opponents and climb the leaderboards. Indeed, with its simple gameplay mechanics that usually only require the DualShock's two analog sticks and an unrelenting dedication to gameplay over even the faintest pretense of story, Hoard is kept from greatness only by its unsuitable soundtrack, lack of visual variation, and a comparatively lackluster single-player mode. You might also cringe at its slightly expensive $14.99 price tag, which seems a touch too high for the fairly simple experience that it offers. For players seeking a good online multiplayer game for the PlayStation 3, however, Hoard will be a welcome addition to their own hoard of games. 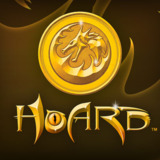 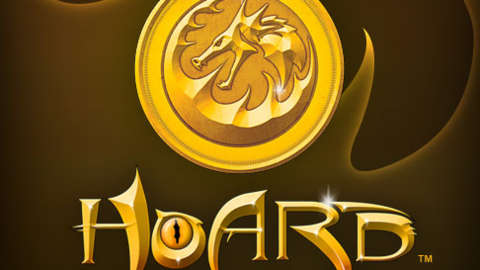 Hoard is an arcade action-strategy score attack game in which you play as a dragon intent on ransacking a medieval kingdom to gather a giant hoard of glittering gold.