History Channel: Civil War is good for a few mindless hours of shooting action, but not much else. History buffs need not apply.

There's no question that World War II is the war of choice for developers looking to make a first-person shooter based on real-life events. With no shortage of games based on the Second World War already on the market, including its own Call of Duty series, Activision has gone even further into the past--all the way back to 1861--for inspiration. Despite a somewhat unique setting for a first-person shooter, History Channel: Civil War is a run-of-the-mill affair that isn't likely to please Civil War buffs or, for that matter, anyone else.

History Channel: Civil War follows the events of the American Civil War that pitted the North against the South from 1861 to 1865. There are 12 levels in all, and you'll play as a soldier for both the Union and the Confederacy. You'll fight through five levels for the North and six for the South before fighting one last battle for the Union side in Petersburg. However, you're not likely to care which side you fight for--there's very little story, and no matter what you do, the North wins and the South loses. A brief video explains the events leading up to each scenario before each level, but other than conveying the tremendous loss of life and showing a few interesting black-and-white photos, the videos are uninteresting and consist of nothing more than dry narration about troop movements as you view colored blocks moving around maps.

Outside of having some different weapons, History Channel: Civil War plays a lot like any other first-person shooter based on a real war. Your soldier can carry a number of weapons such as muskets, rifles, revolvers, a saber, and even a knife. You can also use hand grenades, but they cause such small amounts of damage that they're completely worthless. You'll start off each level with an objective, which is shown as a star on your radar. Radar? Yes, radar. You know, the radar that was issued to each soldier in the Civil War. These tasks include planting explosives, smashing a telegraph machine, stealing documents, or simply meeting up with a commanding officer. After completing a task, you're given a few more things to do, and then the screen fades to black--there's rarely any sense of accomplishment after a level.

Not only are the objectives for each level not particularly interesting, the gameplay isn't very exciting, either. You have some guys fighting alongside you, but they're worthless, so you'll mostly be going at it alone. Enemy artificial intelligence is subpar. Soldiers stand around while you shoot them, they're completely oblivious to a gun being pointed at their heads and rush you in an effort to fight, and they almost never try to flank you. On the default setting the game starts off quite easy and you can make it through the first five chapters by running-and-gunning through the enemy. It's when you fight for the Confederacy that things begin to get difficult. This is less due to the CPU employing any sort of advanced tactics and more a result of the game throwing more enemies at you, which in turn makes it more difficult to ignore its numerous flaws.

By far the biggest issue is the weapons--more specifically, how long it takes to reload the guns. While it indeed took a very long time to reload these weapons, this instance of historical accuracy hurts the gameplay. The reloading animations are detailed and seem to be accurate--other than being sped up (but still too slow)--but that doesn't make them good. The first time you encounter other soldiers also out of ammo and race them to see who's going to reload first, it's funny, but after a few dozen such encounters it's much less amusing. Most of the weapons in the game hold only a couple of bullets, so you'll have to reload much more frequently than you do in other first-person shooters. Of course, if you do actually shoot someone, the game might not register the hit. If your target is currently fighting another soldier it's not always possible to shoot them; if they haven't been triggered into action, they might not get hit; and sometimes you can shoot them in the face from three feet away and the game won't register a hit. The sloppy hit detection isn't just limited to shooting, though. Eventually you'll probably get frustrated with your guns and run around and melee-attack guys instead, but the hit detection for melee combat is so poor that it's not a very effective option, either.

Unfortunately, the game is plenty vigilant when it comes to tracking how often your soldier gets shot. The CPU has a nasty habit of shooting you through solid objects and dense cover. Enemy soldiers can even shoot you before they appear onscreen, which results in many, many frustrating deaths. These deaths are made all the more infuriating by the checkpoint system--it doesn't exist. Rather than just sprinkling a few checkpoints through the levels, you're forced to save the game. Because you never know when you're going to get shot by an unseen foe, what ends up happening is that you'll sometimes wind up saving the game literally after every soldier you kill. It's as easy as hitting a button on the PC, but on the PS2 and Xbox 360 you must pause the game, select the save option, pick a spot, and then save. If you forget to save, you're screwed and have to do the entire level over again.

It takes around six hours to make it through the entire campaign, and while it can be mindless fun the first time, there's very little reason to play the game again. There's a small amount of replay value in the Xbox 360 version, which has achievements for beating levels, finding hidden items, and shooting accurately. Since it's so difficult to actually hit a target, many of the accuracy achievements are most easily earned by going back through the levels on the easy setting, shooting your gun once, and then running through the rest of the level with your sword or knife. Being a first-person shooter, Civil War might have had some sort of multiplayer component, but it doesn't even have split-screen multiplayer, much less online play.

History Channel: Civil War isn't a bad-looking game, but its visuals aren't particularly noteworthy, either. Soldiers don't look bad from a distance, but upon closer inspection they look rather silly, and the over-the-top death animations belie the generally serious nature of the game. The battlefields are filled with gunfire and explosions, which will destroy buildings and kick up huge plumes of dirt and smoke. Most of the cooler instances of destruction are scripted, though, and the PS2 version lacks many of them. This version also lacks the smaller touches, such as snow or cotton seeds wafting about certain areas, and it's got an iffy frame rate to boot. The levels, while extremely linear, give the illusion of being large and open to exploration due to the forests that surround them. But the ol' invisible wall rears its head should you stray far from your predestined path. In fact, quite a bit of your combat will take place in the forests, which would be fun if the CPU weren't so adept at shooting you through the trees. The PC and Xbox 360 versions are comparable, but the PC version looks better thanks to a solid frame rate.

Civil War's audio is as uninteresting as the rest of the game. The voice acting is dull, hokey, and irrelevant to the point that you'll probably want to skip ahead anytime there's a cutscene. Guns and cannons sound fine, but there's not a great deal of difference between different gun types. There's very little music in the game, though what is there sounds pretty good.

In the end, it's very difficult to recommend History Channel: Civil War to anyone. Civil War buffs would probably enjoy watching a show about the war more than they would spending time playing this game. The narration and cutscenes that take place before each level seem historically accurate, but anyone with any interest in the Civil War would scoff at the History Channel lending its name to a Civil War game that has you actually jump over explosive barrels that are being rolled down a ramp a la Donkey Kong. Anyone else simply looking for a solid-first person shooter will likely wind up disappointed by the derivative gameplay, lack of multiplayer options, and the numerous quirks and flaws found throughout the game. 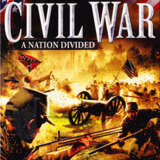 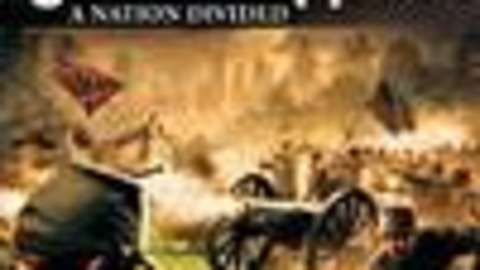 Civil War heads to your PC.

6.3
Sign In to rate The History Channel: Civil War - A Nation Divided