The numerous additions and adjustments add up to a sequel that warrants an upgrade for owners of last year's game and a second look from those who were turned off by the series' formerly unyielding adherence to a simulation design.

It isn't obvious from first glance, but High Heat Major League Baseball 2004 is a significant upgrade on its predecessor. While the leap from the 2002 version to the 2003 version was a conspicuous one thanks to the inclusion of player editing features and a franchise mode, the 2004 version is a collection of tweaks and enhancements that improve upon these and other aspects of the game--from the simplest plays you see on the field to the gameplay modes available in the menus. It all adds up to one of the most realistic and well rounded baseball games available.

The list of play modes has been augmented by the inclusion of a career mode, which is basically the same as the franchise mode, only without salary restrictions. The other options include exhibition, season, franchise, all-star game, playoffs, batting practice, and home run derby. Also returning is the two-on-two showdown mode, where you pick a pitcher and hitter from one team and have them participate in a scoring contest against a pair of players from another team, but without any position players on the field. In this mode, you earn points for throwing strikes and getting base hits. The two-on-two showdown mode is great fun with human or CPU players, because the scores often reach 30 points or more in just a few minutes.

High Heat Major League Baseball 2004 also lets you edit the stats and physical characteristics of any of the more than 1,000 included players, and it gives you the opportunity to make 48 custom players of your own. The only drawback is the absence of a quick method for updating the rosters to reflect opening day lineups. This is disappointing, because the availability of a network adapter for the PlayStation 2 makes such a feature easily possible.

Those familiar with previous High Heat games will appreciate the additions of full minor league rosters and market value restrictions in the franchise mode. You can call up players from all levels of the minors and send struggling players back down to AAA--or lower. At the same time, the contracts of players on your roster count against your available budget, which you need to follow from year to year. You have the option to start your franchise based on last season's rosters or participate in a fantasy draft that allows you to select individual players from the overall pool of major and minor leaguers. Throughout the season, you also have the ability to make trade offers to other teams, although the CPU is smart enough to decline four utility players in exchange for a marquee player like Barry Bonds. All that's missing from the franchise mode is the ability to create custom teams and hire a coaching staff.

Another new addition to High Heat Major League Baseball 2004 is its tuning menu, which gives you precise control over more than 20 different game variables. You still have access to the standard set of difficulty and simulation options you've seen in other baseball video games, but High Heat 2004 lets you take things further by giving you control over settings such as runner speed, human batting averages, and the frequency of foul balls. If you're a beginner, you can diminish the speed of pitches, base runners, and throws so you can work on your timing without sacrificing 10 runs per inning. If you prefer an arcade-style game, you can increase the contact and power ratings of human or CPU batters. Each option has a slider that lets you choose exactly how difficult or realistic each aspect should be. In this manner, High Heat Major League Baseball 2004 is more accessible and customizable than previous games in the series.

Little has changed with respect to the game's overall play design. Like its predecessors, High Heat 2004 doesn't use a cursor interface for batting. Instead, the timing of your swing and the player's real-world statistics are the primary factors that influence your ability to get a base hit. If you swing too late or too soon, you'll foul the ball off. Players with a propensity to hit ground balls in real life are more likely to do so in the game. Pitching is handled in a similar fashion. You select a pitch to throw and the general placement of the pitch in the strike zone, but it's your pitcher's real-life mastery of specific pitches that dictates whether you'll throw nasty breaking balls and earn the benefit of the doubt from umpires. In the batter's box, you can aim the direction of your swing to reach for outside pitches or pull the ball to the opposite field. On the mound, there are 30 different pitches to choose from, which is double the number available in last year's game.

As you play the game, you'll soon realize why the High Heat Major League Baseball series is so renowned for its authenticity. Everything you could possibly see in a real baseball game is here. Concepts like the cutoff man, CPU walks, the double switch, and pitcher warm-ups have been present from day one. The computer is smart enough to play lefty vs. righty matchups and give an intentional base on balls to a player on a hot streak. If you're shellacking the computer, it will substitute lower-tier players so it can rest the heart of the order for tomorrow's game. Every little detail you could possibly imagine is in the game: dropped third strikes, snap double plays, passed balls, pickoff moves, ground-rule doubles, and so on. The list of authentic details is effectively limitless, although you're free to adjust the frequency of certain plays using the new tuning menu.

Unfortunately, the game's problem areas are those that have dogged the series since its inception. The graphics and audio are realistic and full of detail, but they're not necessarily as exciting or as rich as those found in other baseball video games. 3DO totally revamped the graphics engine this year and in so doing increased the amount of player animation, but the players don't generally exhibit any emotion in response to events on the field. Likewise, minuscule details such as live video scoreboards and spectators lurking on the walkways are nice touches, but the lack of home run fireworks and dynamic cloud cover are obvious if you've played other console baseball games. The one aspect where High Heat 2004 excels is its stadium designs. Every nook and cranny of all 30 Major League stadiums is portrayed accurately, right down to the huge outfields of larger parks and the dark shadows cast by the upper decks during day games.

The same basic pros and cons hold true for the audio. The sound effects are crisp and audible to the extent that they reflect the actual sounds of players warming up, the bat making contact with the ball, and catches made in the dirt, but they're also fairly unremarkable. You won't hear things like players interacting with one another or ambient sounds from outside of the ballpark. 3DO did increase the number of stadium announcements and heckler comments, however, and the play-by-play commentary of ESPN's Dave O'Brien and minor-league broadcaster Chuck Valenches is top-notch. They serve up plenty of baseball trivia during batter walk-ups and slow innings. Nonetheless, Dave and Chuck repeat themselves too often, and the audience never seems to bring itself into the game. The audio is perfect if you're used to watching games played between small-market teams, but it's eerie when you're seeing San Francisco play Arizona in front of a packed crowd with only a few catcalls and murmurs.

Even though the High Heat Major League Baseball series doesn't run with the competition in terms of visuals or audio, 3DO closed the gap a bit with this year's release. More importantly, the numerous modest additions and adjustments in High Heat Major League Baseball 2004 add up to a sequel that warrants an upgrade for owners of last year's game and a second look from prospective players who were turned off by the series' formerly unyielding adherence to a simulation design. All that's missing are the kitchen sink, home run celebrations, online play, and a means to download roster updates. 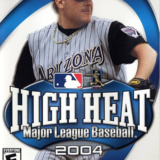