If you're not a fan of the series or not into solving puzzles, your needs will be better met elsewhere.

Hey You, Pikachu! for the Nintendo 64 is a game that will likely be overlooked by people who consider themselves to be hard-core game players. The game pairs this year's hottest franchise, Pokémon, with the even greater fad of voice recognition, and its playpen-oriented features and minimalist difficulty focus the game squarely at younger audiences - a niche often under-appreciated in today's consumer marketplace. Factor in its suggested $80 retail price, and it is easy to see why many people will fail to take Hey You, Pikachu! seriously. It's a shame, too, because once you give it a closer look, Hey You, Pikachu! is a highly addictive game that both children and adults can enjoy.

The first thing you'll notice after prying open the box is the voice recognition pod and microphone. The voice recognition pod plugs into the fourth controller port on the system, while the microphone attaches to the top of the control pad. Once you power on Hey You, Pikachu! and choose a save file, a brief tutorial will acclimate you or your child to the controls. To interact, the analog stick moves the pointer and your focus around the screen, while a push of the Z button records a voice bubble that you launch at Pikachu. If he understands, he'll do as you ask. If not, your mileage may vary. It's also advisable to ignore your initial buyer's remorse when you see the game's minimally rendered visuals and apparent lack of interaction - it takes approximately 32 game days (roughly 100 real-world minutes) to gain access to all the features. Once you've unlocked everything, though, 20 different minigames and a diverse friendship simulation await.

From your bedroom, each day begins by rousting Pikachu out of bed with an uproarious "Good morning!" Once he's awake, you can wander around the room and observe objects you've acquired, converse with Pikachu, play Pokémon trivia on the television, or head outside for some wild Pokémon antics. A sliding patio door leads into one section of the game, Pikachu's Discovery Days, while the front door yields Pikachu's Play Days and Pikachu's Daring Days. Each of these sections contains five separate activities, such as gathering food, fishing, baby-sitting Caterpie, or hunting for treasure. There are also hidden places to discover, such as Abra's Shop and the campground. The goal of each minigame is to use the onscreen pointer and microphone to aid Pikachu in accomplishing each area's tasks. When you're baby-sitting Caterpie, you'll gather rosebuds from the tops of trees. If you're gathering ingredients for Bulbasaur's picnic, you and Pikachu must wander the forest in search of the proper food items. Success in these activities will strengthen the friendship between you and Pikachu, as well as reward you with a stash of goodies to keep around the house. Since Hey You, Pikachu! just keeps going and going, you really can't fail, which makes the game an excellent choice for kids who are eight and under, for those who are easily frustrated, and for those with low attention spans.

Although Hey You, Pikachu! Is not a visual powerhouse, its crisp lines and colorful atmosphere do an excellent job of portraying the world of Pokémon. Each area, be it Viridian Forest or Ochre Woods, is rendered in such a way that fans of the TV series will easily recognize popular landmarks. Where Hey You, Pikachu! really excels, though, is in the area of sound. Interacting with Pikachu and telling him what to do is fun, and the responses thrown back by him and his Pokémon cohort are hilariously uplifting. Pikachu's understanding of the English vocabulary is limited to approximately 200 words and phrases, but the game's voice recognition is fairly solid - it even allows for the sloppy speech patterns of younger children and toddlers. Hey You, Pikachu! has intermittent issues with background noise, but nothing that backing away from the television wouldn't cure.

Despite the positive nature of this review, a huge flag of caution must be waved in the direction of the adolescents and adults out there: This game is not a powerhouse of voice recognition, nor is it a bastion of deep gameplay. If you're not a fan of the series or not into solving puzzles, your needs will be better met elsewhere. However, if you're a dyed-in-the-wool Pokéfan or if you happen to care for young children, then Hey You, Pikachu! is right up your alley. Its price tag may be steep, but there is limitless replay value to be found in the hands of the right audience. 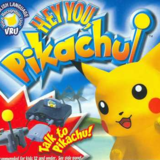