While you won't be getting a free copy of Perfect Dark Zero or Project Gotham Racing 3 with your purchase of a new Xbox 360 premium system, what you will get is Hexic HD, an Xbox Live Arcade puzzle game that comes preloaded onto the hard drive. This attractive, easy-to-play, and addictive puzzle game was apparently designed by none other than Alexey Pajitnov, the creator of the greatest puzzle game of them all, Tetris. Hexic HD is more similar to the more-recent puzzle classic Bejeweled than to Pajitnov's masterpiece, and it makes for a fun and engaging way to pass the time. Its crisp, simple graphics also look surprisingly good on an HDTV.

In Bejeweled, you match square-shaped jewels in rows or columns of three; these jewels then disappear as more spill down from offscreen. Hexic HD is similar, except you're rotating groups of three hexagons instead of swapping pairs of squares. If you get three like-colored pieces to hook up, they disappear and the rest come tumbling down, possibly setting off a big, high-scoring chain reaction. The system sounds a little weird, but it doesn't take long for the gameplay to become second nature. Some advanced moves are possible, which give the game its depth. For example, if you manage to form a flower shape by surrounding one colored piece with pieces of another color on all sides, not only do you rack up bonus points, but you get a special piece that lets you rotate a larger number of hexagons at a time, enabling even greater scoring potential.

Some special pieces aren't there to help you, though. In the survival mode, the object is to clear the screen of as many pieces as possible, but as soon as you run out of possible moves, the remaining pieces get locked down. The board is refilled, but you need to work around the locked pieces, or better yet, try to pull them into combos to get rid of them. But worst of all are the bombs. Once in a while, a bomb piece drops onto the playing field, and you have a finite number of turns in which you need to rub it out by matching it with like-colored pieces, else it's game over. While Hexic HD has a breezy, fast feel to the gameplay for the most part, as soon as a bomb shows up, suddenly things take on a chess-style tactical edge, where you need to make every move count. The bombs can actually feel a little unfair sometimes--you might get unlucky and have a bomb drop nowhere near like-colored pieces--but they're there to make the game challenging, and they succeed at it.

In addition to the survival mode, Hexic HD lets you play against the clock or without time restriction. The bombs are a threat, regardless, but you've also got three difficulty settings to choose from. Harder settings throw more color variations at you, making it tougher to match pieces up. The timed mode is probably the most fun, though each mode offers its own set of achievements for you to try to unlock. The game's presentation makes it easy to keep playing for a long time, too. The razor-sharp, colorful playing pieces are pleasant to look at, and the game's subdued music and satisfying sound effects round out the experience.

It's hard to come up with a safer bet for a pack-in game than something like Hexic HD, which offers a pleasant challenge that anyone would enjoy for at least a little while, if not a long while. The game puts a clever spin on the successful formula popularized by Bejeweled, which in turn was begat from Tetris, so it's somehow satisfying to know that the iterative design of Hexic HD has come full circle. This free game is frankly better than some of the other full-priced Xbox 360 games out there, so if you get your hands on the system, be sure to notice that Hexic HD is already on there, waiting for you to play it even before you stick any discs in the drive. 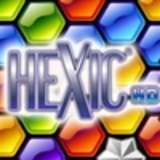