Many people were surprised when the game hit store shelves on time, but it looks like it wasn't really ready to go.

Since its PC inception, Hexen has gotten a bad rap: It's just not "as good" as its big brother, Doom. Its latest incarnation (this time on the Nintendo 64) proves that while in one way it doesn't deserve that rap, in another, it deserves it as much as ever. Yep, it's true, I have decidedly mixed feelings about this game.

For those of you unfamiliar with Hexen, it's an RPG-themed take on the first-person shooter. In fact, it's a sequel to a similar title called Heretic (a game known best for carrying the dubious title of "the first Doom clone") and both are based on the Doom engine, though they're happily altered slightly so that you can jump. Instead of playing as the perpetually furious marine, you are given the choice of three different character classes: warrior, cleric, or mage. Each class plays a little differently, with the warrior being stronger, faster, and lacking in magical attacks; the mage is weaker, though he has far-ranging magical attacks that allow him to keep his distance from enemies; and the cleric is a mix of the two. Artifacts have different effects for different characters as well. For example, the flechette item acts like a grenade for a warrior, a bomb for a mage, and, best yet, a poison gas cloud for the cleric, which can be used to take out multiple enemies if placed correctly.

Other than its characters, Hexen also differs from traditional Doom play by its "hubs," or levels that must be come back to after puzzles are solved or items acquired. Both are pretty standard fare for players who have taken on other versions of the game (it is, granted, a fairly straight port), but if Hexen on the Nintendo 64 is the first time you've tried the title, you'll likely find it a nice break from the monotonous "run and shoot" first-person games because of its puzzle aspects and more strategic take on fighting. And Hexen carries a play element that Midway's Doom 64 really should have had, the deathmatch. In it, you can take on your friends in two- to four-player matches. The four-player quarter screen match isn't really worth mentioning, but the two-player split-screen mode is worth your time.

Unfortunately, there are several technical factors that make Hexen a sub-par product when compared to Doom 64. The graphics, while better than ever before, are occasionally plagued by frame rate problems. Likewise, the sound is fairly moody and well done, but during save times, it freaks out and gets quite choppy. But most important of all is the title's fatal bug: During the platform jumping sections of the game, if you save on a platform before attempting a jump (which most players do), and then proceed to fall (this is bound to happen at least once), when you load your saved game back up, the cart places you in the middle of the fall instead of on the platform before you jump. Since only one save is allowed per memory pack, you can kiss any progress you've made so far goodbye, making it impossible to play through. For me, this happened when I was about two hours into one game, and then four into another. Frustrating? Yup.

While Hexen on the N64 does have its plusses, I'm afraid I can't recommend the title with this horrible save game bug in place. Many people were surprised when the game hit store shelves on time, but it looks like it wasn't really ready to go. 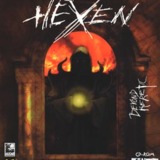