Heroes of Might and Magic II: The Price of Loyalty Review

The Price of Loyalty does one thing really well - it diversifies the missions.

Last year's was an excellent turn-based strategy game, an underappreciated little gem marked by its originality. It didn't try to be Civilization or Master of Orion. Heroes II was its own game, far better than the original Heroes, and featured a great mix of combat and resource planning, a beautiful operatic score, and even some touches of humor - such as the Vampires exclaiming "Blah!" when attacking. The only problem with Heroes II was that it tended to get a bit monotonous because the missions had basically the same objective over and over - find the resources, eliminate your opponent. Mind you, the "same thing" in this case was great fun, but once you found a few useful strategies the challenge was minimized.

first expansion pack for Heroes II, The Price of Loyalty, does one thing really well - it diversifies the missions. The expansion was developed by , the same folks who created the add-on for . The two full campaigns included, as well as the two mini-campaigns (totaling 24 new campaign missions), feature some great new mission types that will force even the most stalwart hero to rethink his strategies. There are missions with time limits, missions where you can't build any castles and must rely upon hiring creatures at various locales, and missions in which the resources are clustered in spots across the map, making it nearly impossible to have access to everything you need without some haggling at the marketplace. And thankfully New World Computing didn't follow the "make it impossible" trend of most add-ons: Heroes II vets will find this a suitable, but not insurmountable, challenge.

Unfortunately, the diversity is this add-on pack's only notable strength. There are a few nice additions - the ability to hire a wider variety of creatures outside of your castle, a selection of new artifacts, and some new building types scattered across the map - but there's a noticeable lack of anything that really changes the gameplay. Only the Necromancer gets a new castle upgrade (the Evil Shrine, which enhances his ability to raise the dead), and there are no new monster upgrades or spells to augment the other heroes' arsenals. The Price of Loyalty also includes some new music (which is great) and some new heroes, but unless you're really attached to the first game this probably won't be much of a deciding factor.

Of course, more of a good thing is still more of a good thing, and those who've finished Heroes II but don't want to spend the dozen or so hours necessary to complete a multiplayer game will find The Price of Loyalty a solid method of prolonging the experience. But for those who are still trudging through the original campaigns, there's not much here to make it a necessary purchase until you've finished. 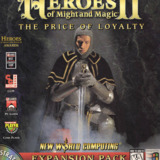