Hercules isn't godly, but as a whole it's a decent adventure.

Trouble is brewing in the ancient world of Gaea. Your brother Ares seeks to overthrow your father Zeus and seize control of the entire kingdom. The disturbance results in the suffering of the humans who inhabit the land. Most of the gods don't care about the mortals, but you, Hercules, empathize with them and decide to set things right again. Your desire to aid the people leads you on an adventure based on the Hercules TV show.

You guide Hercules throughout much of the game, but you also tackle some quests as Hercules' friends Iolaus and Serena. Each character fights swarms of enemies and occasionally performs some other actions such as jumping or swimming. You'll solve a good number of standard adventure-game puzzles during Hercules' journey. Such tasks include pulling switches in a predetermined order, hunting for keys, and tracking down possessions for the townspeople. While the puzzles take some time to solve, most of the challenge comes from fighting enemies. The individual antagonists themselves don't pose much of a threat, but several of them usually pounce on you at once. Also, the soldiers respawn indefinitely in many areas, so you can never kill all of them. Thus, you're sometimes better off simply running away from foes and not fighting. Besides the more common warriors, you also battle some stronger creatures, such as a cyclops and the Minotaur.

For the most part, you won't experience difficulty controlling Hercules. In many 3D games, you need to fumble around to find a position where you'll actually make contact with an object. Hercules avoids such problems by displaying an icon on the screen to let you know when pressing a button will actually execute a special move. Fighting doesn't give you much trouble, either. Each character can perform a relatively limited number of attacks, which means you'll learn the control scheme quickly. The camera moves quickly enough so you won't need to manually adjust it too often. However, when you fight particularly large opponents, your adversary will sometimes get stuck between your character and the camera and hence obstruct your view.

Although Hercules doesn't display any particularly impressive effects or animation techniques, the game's overall presentation looks solid. Hercules uses fade-in effectively to prevent any glaring pop-up problems, and fog is kept to a minimum as well. However, the frame rate does turn choppy if too many characters appear onscreen. Textures are about average for a Nintendo 64 game, with a slight amount of blur. However, the facial textures on some of the townspeople appear a bit odd.

The music usually fits the mood of the game. Soundtracks range from light and peaceful to ominous, depending on your location. The sound effects come across as somewhat silly at times. The noises Hercules makes when he consumes a power-up, such as an apple, sound more like someone snoring than someone eating or drinking. Some of the better sound effects include the noise of clashing swords, the panting sounds the characters make when they climb vines or ladders, and the screams the guards belt out just before they attack.

If you've already completed the Nintendo 64's other adventure games, Hercules is at least worth a rental. You'll probably find the adventure moderately challenging. However, once you discover the puzzles' solutions, you'll beat the game quickly. Fans of the show or Greek mythology will enjoy controlling the familiar characters. Hercules isn't godly, but as a whole it's a decent adventure. 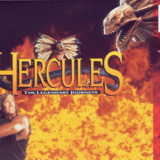 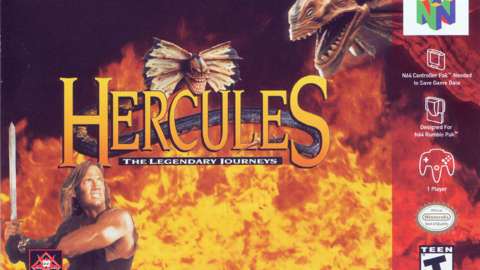 Hercules isn't godly, but as a whole it's a decent adventure.