Hercules is a game not to be missed.

Virgin Interactive has brought the magic of Disney's animated motion picture Hercules to the PlayStation - awkwardly-named Hercules Action Game. Hercules is a side-scrolling action-adventure game that puts you in the role of the mighty Hercules on quests that follow the movie's storyline to the letter. In fact, players that have seen the movie actually have an advantage because the movie shows how Hercules beats some of the same bad guys that you must defeat in the game. Although Hercules is a 2-D side-scrolling game, it possesses some unique features that put it in its own class. The use of the Z-axis lets Hercules move in and out of background scenery, giving the game a pseudo 3-D look and feel. The other feature that truly makes Hercules fun is the constant interaction that Herc has with his surroundings. For instance, you must use Herc's amazing strength to pick up giant boulders to throw at enemies or use Herc's powerful fists to knock columns and other obstacles out of your way.

Hercules seems to be composed of a combination of the best features of previous 16-bit Disney titles, such as the behind-the-back running sequence from the Lion King, the item system from Pocahontas, and the simple pleasure of exterminating bad guys with big swords from Aladdin. While its 16-bit predecessors may have influenced Hercules, Eurocom has definitely taken this Disney title to the 32-bit level in terms of graphics, sound, and gameplay.

Graphically, Hercules is a masterpiece. The game is energized with cartoon-style graphics that look almost as good as the animated movie. A staggering number of animation frames was used for the character movements - over 10,000! There are also some 3-D elements and objects in Hercules' world that are similar to those in the movie, such as the terrible nine-headed Hydra who was rendered with computer graphics in the movie. This seamless blend of 2-D and 3-D objects makes the game more than just a 2-D side scroller.

Although the visuals are impressive, they are only half the experience. The sound and music are fantastic, mirroring the musical score from the movie. Also from the movie are the voices of Danny DeVito, James Woods, and other stars. Besides using the recorded material from the movie, Virgin Interactive also recorded dialogue specifically for the game.

Hercules is an amazing game that features some of the best graphics and sound ever seen in a side scroller. With all its eye candy, amazing music, and voices, Hercules is a game not to be missed. Even though Hercules is an action game (as the title implies), players who like looking for secrets and hidden items won't be disappointed. The only drawback to the game is the recurring problem with most side scrollers: It is easily beaten within a week or so. Just the same, anyone looking for some old school action should definitely pick up this game. 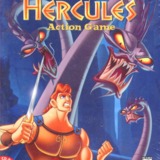