The weak and the wounded.

All it took for Her Story to become brilliant was a name. It’s not a moment the game is counting down to, and out of the context--the context I’d built over the half hour or so--it could even be written off or missed. But that’s where Her Story gets its power. It’s a 200-piece psychological puzzle offering the cheap, gamey thrills of putting two parts together, but it is much deeper, darker, and even sadder when you realize what the picture might be when it’s finished.

The catch-22 is that talking about the game involves a spoiler minefield. Every word that inches up to what Her Story ultimately becomes cheapens what’s waiting for players down this particular rabbit hole. One should at least have a grasp of the setup, You boot up the game, and you’re presented with an ancient relic of a mid-90s police database, already keyed into a series of grainy VHS interviews with a shy, evasive woman speaking to an unseen, unheard interrogator. The single keyword searched for is “murder.”

Five videos are pulled up at the start totaling maybe 5 minutes, and all the videos raise a litany of questions about who this person is, what she has done, where she is right now, and why she did it. How you go about finding answers to those questions is completely up to you. The transcripts of every interview this woman has given while in custody are searchable within the database. You can type in any word or series of words this woman may have said at any point during the interview process, and the database will give you clips of any interviews in which she said those words. For example, typing in the word “husband” will return a clip in which she talks about meeting, marrying, and possibly fighting with her husband. When she mentions her husband by name, typing in his name will lead you to another set of clips, in which she might mention the suspicion that he may have cheated on her, which might lead you to type in “cheat” or “affair.” Some clips may include more clues than others, which is why you can use the note-taking system for each clip to type in a free-form note and keep your thoughts organized during the search. This is recursive Wikipedia-search detective work at its most meaningful and interesting. The system wouldn’t have been terribly out of place in any number of laughable, Digital Pictures-quality full-motion-video games from the early 90s, yet the ambitions at play here overshadow all of those former attempts.

The game depends entirely on player curiosity to drive the broken narrative forward, asking you to take a big risk in trusting that the truth is actually out there. It’s entirely possibly to get stuck on a string of minutiae, forgetting a key phrase and winding up hopelessly lost. If a “game over” is to be had, it comes from simply losing one’s way through the narrative. It’s relatively simple to do, especially if you're not entirely invested from the beginning. That said, virtually all the answers are in the interviews if you’re tenacious and observant. No one clip is the linchpin to the whole thing, though the big revelations are there, and a rather out-of-place chat program acts as a sort of ersatz signal that you’ve seen the clips necessary to say, “Pat, I’d like to solve the puzzle.” The signal doesn’t necessarily mean that you should stop looking, however.

You won’t necessarily want to stop looking, either. The woman--played wonderfully by Viva Siefert--isn’t necessarily on the defensive as much as willfully omitting what becomes painfully, coldly obvious from a simple slip of the tongue or an uneasy body movement. When the truth finally leaves her lips, it comes with such a preternatural calm for something that should set off alarm bells for anyone else watching, which makes the character and the performance even more affecting. Each layer of the mystery you’ve managed to peel away and witness and each struck nerve breaks this woman’s carefully crafted quilt of lies down to a series of frightening frayed ends.

Game director Sam Barlow was responsible for the terrific Silent Hill: Shattered Memories a few years ago, and even though Her Story contains no eldritch, sword-wielding horrors, or disfigured mannequins, this game has a kindred feeling with the best entries in that series. Through our own curiosity we listen to this woman speak, her honesty treading on every day, deep-seated feelings about menial life, her parents, sex, social responsibilities, and the kind of seething resentment that causes people to do terrible things when they think no one’s watching. Just because it never shifts towards the supernatural doesn’t mean it doesn’t inspire something quietly distressing when hearing someone else tell it.

If anything, Her Story is more distressing because these feelings are familiar; we experience the same distress hearing the friends and neighbors of the world’s worst people describe them as quiet and keeping to themselves. We have an intimate level of knowledge about this woman in the wake of her own personal tragedy, and the strength of Her Story as a narrative experience is that even as the right clips put the truth in sharp relief, your ability to uncover it is both satisfying and horrifying. This feat of intelligence and insight sticks with you long after the credits roll.

View Comments (202)
Back To Top
8
Great
About GameSpot Reviews 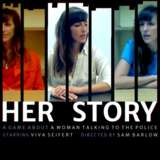 Justin Clark was able to piece together the story in about 2 hours. As one of maybe 13 people on the planet who owned a Sega CD, he’s no stranger to FMVs and things that don’t last as long as you want them to. 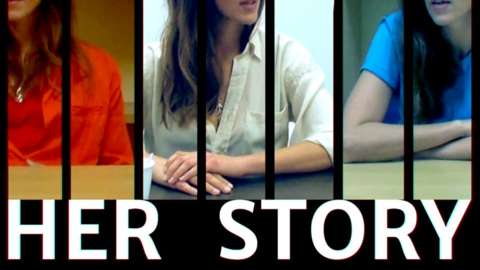 Her Story is the new video game from Sam Barlow, creator of Silent Hill: Shattered Memories and Aisle. A crime fiction game with non-linear storytelling, Her Story revolves around a police database full of live action video footage. It stars Viva Seifert, actress and one half of the band Joe Gideon and the Shark.