Excruciating difficulty makes this latest addition to the Desperados family one frustrating trip back to the Wild West.

Don't let Helldorado confuse you. Despite the snazzy new name sported by this real-time stealth strategy game set in the Wild West, this is actually the third release in the Desperados series from German developer Spellbound. As with many strategy sequels, don't expect to be treated kindly. Everything about this unbelievably hard tactical game assumes that you have logged serious hours with the previous two Desperados. If you haven't, then say howdy to big-time frustration. Every mission is so spectacularly grueling and the settings so thoroughly rigged against you that you feel like a guy with a broken hand drawing six-guns against Wyatt Earp. The extreme challenge is certain to drive away almost everyone but Desperados veterans itching for another fix and hardy Western aficionados willing to endure anything for a trip back in time.

The story, setting, and characters could have been pulled out of an old Gunsmoke episode. Everything is just as cliched as in the previous Desperados games: You control a team of Wild West stereotypes that includes gruff-but-lovable gunslinger John Cooper, sexy gambler Kate O'Hara, dimwitted Mexican thug Pablo Sanchez, slippery explosives expert Sam Williams, creepy old Doc McCoy, and a Native American tracker named--yes, seriously--Hawkeye. Just in case you don't immediately understand that these are all cornball rip-offs of stock characters featured in oat operas for the past century, each of these clowns underlines the point with goofy order acknowledgements, such as Pablo's expressions of love for tequila, Hawkeye's continual references to the "white devil" and buffalo, and Sam's "Yippee-yi-yay!"

As with most games of this type, each hero has a specific set of abilities. Cooper, for instance, is quick with his six-guns and can make silent kills with a throwing knife. Kate can seduce opponents into a stupor or knock them out with the special powder in her makeup compact. Hawkeye can shoot arrows and throw a tomahawk. Sanchez is a muscleman who can blow baddies away with a shotgun and leave bottles of tequila lying around to tempt guards into drinking themselves unconscious. Gee, a stupid, drunken Mexican bandit. It couldn't be any more of a racist stereotype unless he were constantly wandering off to take siestas in the noonday sun.

All of the characters are drawn up along the same lines as those in the prototypical tactical stealth game, Pyro Studios' Commandos. You go into missions with a team and have to work together to get out of whatever scrape you find yourselves in. The overall story is sketched out roughly and is kind of hard to understand. Not that it matters much. You don't need to know a whole lot about being blackmailed by a mysterious femme fatale into committing various dastardly deeds, because the objectives of the multipart missions are cut-and-dried. Basically, you need to make it from point A to point B in each of the 12 single-player-only missions without attracting the attention of the guards who are between you and the goal. And that ain't easy.

You know how most tactical stealth games tend to place a handful of sentries at key points in levels? How they structure maps like puzzles, with a few guards walking patrol routes with vision cones regularly overlapping so that you need to watch for patterns and sneak on through only when the time is right? Well, that same design pattern is followed here, but with the addition of dozens of enemies wandering around, hanging out having a smoke, waving guns for no particular reason, taking a whiz in the bushes, manning guard towers, and so forth. So as you might expect, the difficulty level in Helldorado is beyond belief, no matter what difficulty setting you choose. If you make a single mistake, a pack of enemies instantly leaps into action to gun you down. Instead of tracking one, two, or three sentries at any given moment, you have to keep an eye on the vision cones of at least half a dozen.

The missions are more tedious than tense. You need to methodically eliminate the opposition one by one to open up a passage through the many, many guards. For instance, in one chapter of the second level, you need to guide Pablo and Sam around a train depot guarded by more US cavalry soldiers than Custer had at Little Big Horn. These troops are scattered across the map in groups of five or six, with all of their vision cones intersecting in such complicated ways that you simply cannot sneak past them. Instead, you need to knock them out, but in a very careful fashion that doesn't alert the whole train station.

First you have to come up with a plan of attack, which requires you to treat each mob of baddies like a logic puzzle and set a pecking order. Then you need to start luring victims off to a quiet spot where you can conk them over the head without raising an alarm. Generally this is done with Pablo's ability to distract enemies with conveniently located bottles of tequila. You need to get close to a vision cone, drop a bottle, retreat posthaste, and then either club the soldier over the head when he wanders over for the free booze or wait for him to chug it down and pass out. Finally, you have to tie up the unconscious enemy with Sam and use Pablo to carry him off to an out-of-the-way spot. Sound like fun? It sort of is at first, but you need to repeat this same formula over and over again to make progress through the level. Just about every enemy along the route you choose to reach the end goal has to be eliminated, because there are few seams to exploit and almost no shortcuts to take.

Actions also sometimes have to be coordinated with multiple team members by using the game's quick action feature. This lets you script attacks and then set them off concurrently, but it can be tough to script everything so that guards are gooned simultaneously. One slight slip is all that's needed for a baddie to get off a gunshot and bring the whole level down on your head. And even when you do pull off some derring-do that would have impressed Sergio Leone (which you can watch in a close-up cinematic camera), chances are good that you will still wind up spotted by a guard you missed. It's just about impossible to see every sentry in a first run-through, because there are so many of them hanging out in the shadows. Most don't say anything unless they spot you, either, so you don't get any audio tip-offs to a nearby enemy presence. Aside from an odd whistle and an even rarer conversation, you're stuck using your eyes, not your ears.

The game quickly turns into one of those immensely annoying "experiment, die, and try again" cycles where you spend more time loading saves than you do plying your sneaky trade. This might be enjoyable for hardcore types who have mastered the previous Desperados games, but most players are going to quickly become discouraged. By the time you hit the fourth mission, you're starting levels up against too many enemies to count, with your team spread out in starting positions all over the map. It's so daunting to look over what's to come that it can be hard to suck up the courage to even start these levels. Missions are massive. The maps consist of sprawling towns, train depots, saloons, and so forth, and they're covered with dusty streets, staggering drunks, water towers, wooden sidewalks, and all and all sorts of other Wild West accoutrement. Every location looks great, too, although the graphics are dated, the characters are a tad pixelated, and the levels are often so packed with enemies that the frame rate gears down until you're in single-digit territory, making progress so choppy that the game verges on the unplayable with the camera zoomed out. Each of the 13 missions takes a good two to three hours to finish, and given the current sub-$20 price of the game, you're getting a good bang for the buck. Still, it's hard to count this as much of a plus when you might be spending those many hours tearing your hair out from frustration.

Challenging strategy games are always appreciated, but Helldorado takes a good thing too far. The difficulty is so extreme that just the act of starting a new level can be depressing, especially after you pan the camera over the landscape to reveal the dozens of enemies that need to be sneaked past or knocked out. Only players who have experience with the Desperados franchise or its inspirations, such as the Commandos franchise, need apply here. 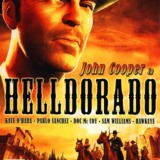