Helldivers won't be remembered for its narrative, nor will it be praised for intriguing mission design. No, these elements of the game are merely average pieces of a backdrop in a theater enacting thrilling performances destined to be endlessly retold among friends and fellow helldivers--and many of those tales are the kind that begin with "Hey, do you remember that one time?" Among these stories, the best ones told by veteran helldivers are of the edge-of-your-seat moments that culminate in cries of jubilance and relief as you and your allies watch your space-faring drop ship fly to safety just in the nick of time. But just as indelible are the tales that end with howls of disappointment (or, sometimes, laughter) as the last remaining member of the team crumbles against the odds and is finally overtaken. There are undoubtedly some blemishes in Helldivers' armor, but inside that armor you'll find a story creator, helping you craft fond memories to be retold for years to come.

Indeed, the stories you create will be ones that will stick with you long after you hang up your uniform, as the plot in Helldivers is one quickly lost to the recesses of space. A multiplayer twin-stick shooter, Helldivers sends you and your fellow caped soldiers to march across the galaxy, delivering "managed democracy," all for the glory of Super Earth. You fight an interstellar war against three other races: the grotesque bugs; the technologically advanced illuminate, and the cyborgs, humans who grafted flesh to metal after separating from the regime--all of whom the government has decreed the enemies of freedom for some reason or other.

The game draws its theme from current history and popular fiction such as Starship Troopers, with the latter inspiring the game's light-hearted, corny propaganda. There are also some thinly veiled references to real-world issues. The Super Earth government labels cyborgs, who reportedly attack with suicide bombers, as terrorists, all the while justifying war in the name of protecting democracy and "our way of life," as well as collecting necessary resources such as, you guessed it, oil deposits (sometimes the veil is so thin as to be nonexistent). But Helldivers isn't attempting to be the next Spec Ops: The Line. It uses tongue-in-cheek humor throughout, and a delicate touch with its weighty themes.

Helldivers is tug of war on a cosmic scale. You and your fellow helldivers fight together against the three computer-controlled species, who reciprocate by pushing toward Super Earth. It's a persistent online universe, in which battles are won and lost even if you don't partake in them. The war theater, viewed from a console on the deck of your ship, is split into three large sections that are then broken into smaller sectors, any of which are claimable after you gather enough community points. These points are earned by completing missions on the many procedurally created planets nestled within. Once all the smaller sectors are claimed, you can begin the real battle, on the alien homeworld. During my time with the game, we were able to take the fight to the bug planet, which invoked some fond memories of a certain sci-fi adventure romp. Hopes were high, but to say the planet was a tough nut to crack would be an understatement--we got completely whupped. The desert world was too much for our handful of helldivers, but perhaps the story will be different post launch. Ultimately, complete conquest of the three planets is the goal, and once achieved, the game starts anew. The home world fights are not the only special events, however. On occasion, helldivers are called to safeguard a city under siege, and cleansing the infestation results in a double dose of experience points. Also, if an enemy species manages to breach Super Earth's defenses, all players rally to its defense.

The humdrum missions, sadly, do put a damper on the engaging design of Helldivers' war front. Planets are won by completing objectives, which don't stretch far beyond the typical, such as capturing and holding an area, activating some device or another, or the always popular escort mission. Odds are you will be too occupied dealing with oncoming waves of enemies to notice boredom seeping in, but after hours of slowly dragging a briefcase or yet another hapless group of stranded civilians across a stretch of terrain, it's difficult not to feel a sense of slowly mounting frustration at the tedium. Completing missions offers a variety of awards, at least. Experience points, in an amount that varies depending on your performance, are showered upon you at the end of each stage. Leveling up unlocks new weapons and gear to be used in your campaign, though I would have preferred for the game to denote which piece of equipment unlocks at what level, rather than being occasionally surprised.

Helldivers' one-two punch of deep strategy complementing intense cooperative combat, however, is fantastic. It is so good, in fact, that it often overshadows much of the dreariness arising from the dull missions. It is incredibly satisfying to play on a team of up to four helldivers, all relying on each other to survive while executing carefully planned strategies involving perks and equipment. Playing the game solo is possible and provides its own set of challenges, but it just doesn't offer the same experience. Choosing a planet, the squad leader picks where the group of guerilla fighters will make its landing. On the ground, the team then decides what pieces of equipment, called stratagems, to call down, and what objectives to tackle first. Equipment varies, and includes options ranging from a UAV, which pinpoints threats on the map, to gun turrets, ammunition boxes, heavy guns, and much more. New stratagems are unlocked when battles on certain planets are completed, with more equipment being offered as a reward. The enemies you face also affect your game plan: Bugs are plated in thick carapace, and charge at you brandishing massive claws; cyborgs are often strapped in bullet-deflecting armor, forcing you to carefully line your shots up with any exposed fleshy bits; and the illuminate attack with high-tech war machines, mind control, and snipers that can kill with one hit.

The stories you create will be ones that will stick with you long after you hang up your uniform, as the plot in Helldivers is one quickly lost to the recesses of space.

The combat itself unfolds organically as you make your way from objective to objective. If your landing is free of immediate hostiles, you can attempt to move through the area with stealth and haste, quickly eliminating any scouting party before scouts manage to raise an alarm. It's entirely possible to complete a mission leaving only the corpses of unwitting foes in your wake, but more often than not, you will end up hammering down your trigger as enraged forces rush to meet you. The weapons, which include a disparate array of rifles, shotguns, and beam cannons, dish out white-hot metal or plasma in gratifying thunder. Bullets rip through flesh, leaving smatterings of blood and piles of viscera in their wake. Effortlessly smooth controls make the gunplay feel terrific throughout every fight.

Helldivers is easy to jump into, depending on your familiarity with twin-stick shooters, but even if you're used to the style, you will find that the game has many factors for you to keep in mind the moment your boots touch terra firma. Chief among them is the immense difficulty, which requires all players to be at the height of their game, as one mistake can spell immediate disaster. As you travel around, research samples that dot maps must be collected in order to earn points to use to upgrade weapons and stratagems. Friendly fire is another item of concern, as it is always on and cannot be disabled, so practice keen trigger discipline. Ammo conservation is an equally high priority, as reloading will discard any unused rounds in a clip.

Death is no stranger in Helldivers, and despite your glorious, flowing cape, you are not superhuman. The game demands a sharp eye and a clever wit; otherwise, you will go down fast. And, take it from someone who knows, if your fallback procedure keeps circling back to running away as quickly as possible, then maybe it's time to rethink the battle plan. Falling in combat is hardly the end of the game, however, as you can call down a reinforcement stratagem to bring a lost comrade back onto the battlefield. But do keep an eye on where the pod (actually, any stratagem, come to think of it) is about to land. Far too many helldivers have lost their lives being crushed beneath incoming ordnance, which doesn't solve any problems whatsoever.

Beyond mission design and story, Helldivers has other issues, though some are negligible. For example, you can customize the look of your helldiver, as well as unlock new clothing designs as you go along, but the options only change from dark to not-so-dark. Since the camera floats off at a distance, it's easy to confuse one dark-armored soldier with another, often resulting in someone foolishly falling off a ledge or firing a weapon into an unrecognized ally. A friend I was playing with also mentioned that the game wasn't tracking his progress when he was playing in my lobby. This is a minor issue; one that I've been informed may be patched by the time the game releases. On the more nitpicky side: What is with the wind on some planets? More than once, during rare moments of silence, I watched as shadows of clouds moved northwest, while dust on the ground flowed to the west, and a small handful of particles lazily floated east. All the while my cape drooped, apathetic to the elements. But on the subject of capes, it's oddly amusing to spin in place and watch your cape flow in response to the motion. And I know I'm not the only one to feel this way. Before nearly every mission, I watched as so-called hardened fighters twirled on the deck of a battleship; joining the impromptu dances is almost irresistible.

The game draws its theme from current history and popular fiction such as Starship Troopers, with the latter inspiring the game's light-hearted, corny propaganda.

Helldivers is a hugely entertaining space romp, despite bearing a few battle scars. It is truly a game designed for precious water cooler moments, when you can tell stories of fights barely won, and anecdotes detailing white-knuckle flights from insatiable hordes. The deafening cheers heard through my microphone as the last living member of the team squashed a bug tank with three reinforcement pods, turning the tide back toward victory, is forever etched in my mind. Imperfect as it may be, Helldivers' focus on the cooperation of a small team looking out for each other against oppressive waves of enemies elevates it from what would have been a fun and challenging shooter, to a game that now sits at the top of my list of how I plan to spend many future evenings: with a gun in hand, my allies at my back, and a broad smile on my face.

Helldivers is featured on our list of the best PS4 multiplayer games.

View Comments (233)
Back To Top
8
Great
About GameSpot Reviews 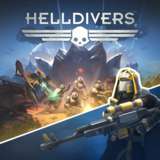 Cameron Woolsey is no stranger to playing a bug-stomping space marine. He’s always on the lookout for new planets to claim and new foes to liberate--hopefully with a big space gun. For this review, Cameron played more than 25 hours, reaching level 16, and making it all the way to the bug home planet before being kindly, but firmly, asked to leave.