This gritty and profane detective tale winds down to a sound conclusion.

In just three short outings, the Hector: Badge of Carnage series has established itself as a delightfully deranged and wickedly entertaining mature adventure game series. It didn't have very far to climb, considering few other games in the genre are this bloated with seedy characters, crass commentary, stomach-turning sexual innuendo, and the full spectrum of vile bodily fluids. But the bold risks that developer Straandlooper has taken with this edgy trilogy make Badge of Carnage stand out as a memorable detective romp for those who enjoy a warped sense of humor and bizarre puzzles rooted in scatological weirdness. The series wraps up on a high note in Episode 3: Beyond Reasonable Doom with a string of odd surprises that tease you along to the satisfying conclusion.

Hector's mini war on terrorism in the foul city of Clappers Wreake came to a head in the previous episode, leaving the gruff detective inspector and his dim-witted partner, Lambert, hoodwinked and captured by the person responsible for the deadly plot to rid the place of its general awfulness. Beyond Reasonable Doom gets rolling with the duo waking up strapped into a makeshift death trap that threatens to drown them in a deluge of human feces unless Hector runs endlessly on a treadmill. It's a comical start to a zany episode filled with lots of new locations to poke around in. The last leg of the detective duo's adventure sees them scouring the countryside and pushing through the eccentricities of one gnarly carnival in an effort to save the city's citizens from being turned into raving "bastards" by a malevolent ringtone. Madcap shenanigans are par for the course in Badge of Carnage, and this final blast continues to deliver the same level of over-the-top ridiculousness and bawdy humor established early on in the series.

Like its predecessor, Beyond Reasonable Doom initially has you swapping control back and forth between Hector and Lambert to juggle items and work out solutions to the first stretch of bizarre puzzles. Their relationship is more directly collaborative than in the previous episode, providing fresh fuel for the game's humor and brain benders to unfold as the two work side by side. Tag-teaming against an eager-to-brawl farmer for the right to reach into his cow's backside to retrieve a key item is just a taste of the episode's many creative-yet-disturbing puzzles. Donning a feces-smeared toilet seat, launching a giant pink vibrator into the heavens, and stealing a leprechaun's "nut sack" are among the unsavory tasks this wild adventure holds. Despite being frequently gross, the multilayered puzzles are clever. They're challenging in spots because of the often peculiar combination of tasks required to solve them, but most can be tackled with a little intuition. It's great that the game includes a full walkthrough that can be accessed via smaller hints or full solutions, though you must bear the brunt of some humorous berating for using it.

Beyond Reasonable Doom's locations are colorful and varied, though the scope of the scenery isn't as broad as the previous episode's terrain. Rather than hopping around different locations throughout the city, you follow a more linear track that's driven by the plot, winding toward a conclusion. The latter portion of the adventure plays out in a large, freakish carnival consisting of many smaller scenes strung together. The myriad booths of oddball attractions are full of curiosities and puzzle elements to navigate, but it still feels like one massive location. This isn't a big issue, since the episode stretches out the finale with some thoughtful twists that tie up loose ends and keep the fun rolling through to the credits. As expected, some familiar characters from past episodes make a return appearance alongside a slew of fresh faces. Hector maintains his gruff demeanor and wields an always-charming arsenal of snide quips, but his punchy personality is more endearing than it was in the beginning. He has grown into a somewhat likable fellow who's a strong enough character to merit another go-around in the future.

Each installment in this gritty detective trilogy has a different feel to it, and the subtle shifts keep the adventure from stagnating. As far as unsavory settings go, Clappers Wreake has blossomed into a virulent cesspool that warrants further exploration, and the antics of its strange inhabitants prove that a deluge of comical foulness can be fun. Badge of Carnage's gutter-oriented humor isn't for everyone, and occasionally pushes the boundaries of taste, but the trilogy's shocking and stomach-turning moments are backed up by some quality adventure gaming. Beyond Reasonable Doom is a fitting and funny end to a series that pushes all of your buttons. Whether that's a good thing or not depends on your threshold for the asinine. 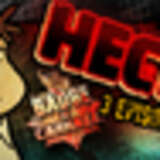