Heavy Weapon Deluxe has great weapon effects and a generally solid look, but the gameplay and control options make the game a little too shallow to recommend.

Heavy Weapon Deluxe is a shooter that puts you in an atomic tank, rumbling through fictitious, decidedly Russian areas as you blast jets out of the sky with a variety of weaponry. Despite the game's destructive theme, it keeps a lighthearted atmosphere, thanks to its cartoonlike graphics.

As you play, you'll earn power-ups that will enhance your tank's firing abilities by adding homing missiles, lasers, and so on. One of the pickups is a screen-clearing nuke that comes complete with a nice-looking mushroom cloud. The game's main mode is a campaign-based mode that has you upgrading your tank along the way, but once you've completed a few of these missions, you can go into survival mode for an additional challenge. Your only control is over where your tank is aiming, though the tank will move back and forth as you aim, giving you some control over dodging, though not as much as you'd like. Separating the moving and firing controls would have added to the game's complexity, and the increasing control options would have been a nice addition. 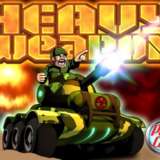