Heavy Weapon's arcade-style shooting is incredibly appealing, especially when you get into the ridiculous action in the multiplayer modes.

Heavy Weapon is an original game that was released on the PC some time ago by PopCap, the casual game kingpin that also offers Bejeweled, Feeding Frenzy, and Bookworm. But rather than sticking to the puzzle-oriented material for which the company is most famous, Heavy Weapon is an action-packed arcade-style scrolling shooter. It's got a lot to it, including a decent challenge and some exciting multiplayer options, both of which help make this game worth its 800-point price tag.

The year is 1984, and the Red Star army has backed the freedom-loving people of, well, some unnamed country--let's just say it's the United States--into a corner. But instead of negotiating surrender with the invading army, the US president turns to his final option: the atomic tank. That's really about as much story as you get, and it plays out in a few seconds in the form of a Flash-like animation at the front of the game. But it's more than enough to get you rolling. The game itself puts you in command of that atomic tank. It rolls along the ground, and the screen continually scrolls to the right. You can move back and forth on the screen with the left stick. The right stick fires in any direction, letting you take aim at the thousands of planes that will attempt to bomb you off the face of the earth over the course of the game's 19 missions. Each mission ends with a boss fight against a larger enemy. The bosses start out simple, like a battleship or a blimp, but before long you'll be fighting hopping robots or a robot gorilla with a missile launcher on its back. The bosses aren't the toughest things you'll face. There are a bunch of different planes and helicopters to deal with throughout the levels, as well as incoming missiles, satellite laser beams, and even nuclear bombs that kill you if they touch the ground. All of this stuff gangs up on you as you progress, which increases the challenge.

You'll start fighting back against the Red Star threat with only a basic cannon, but you quickly earn upgrades, and in the mission mode, those upgrades never go away. Your main cannon will spread into multiple shots, but you'll also be able to sink one upgrade point into one of six weapons after completing a level. These weapons include a laser, homing missiles, straight-fire missiles, a flak cannon, defensive orbs that circle your tank, and a lightning blast that jumps from one target to the next. The best part about these secondary weapons is that you don't have to choose only one. All of the weapons or weapon upgrades that you purchase are active at the same time. So by the end of the game, you're spitting hot fire at all times, all over the screen. Of course, the game ramps up alongside your firing capabilities, ensuring that you never become overpowered. The 19 levels will take some time to get through, and a survival mode and a boss battle mode are also available. You can also play the mission mode with another player, which is neat, but the other multiplayer modes are much cooler. You can play four-player games either locally or over Xbox Live. The two available modes are arms race and war party. The only real difference is that arms race gives you three lives per player, and war party keeps going until all four players are dead at the same time. When you die, a respawn timer pops up, and if you keep dying, that timer will get a bit longer. What makes the multiplayer modes so cool is that the number of enemies multiplies along with the player count. This game is already kind of crazy when you're playing alone, but adding three more players makes it completely out of control.

Visually, Heavy Weapon has a cartoony, almost Worms-like look to it. You'll see shell casings flying out of your little tank as it shoots, and the levels have a bright, colorful look to them. Each level has a different theme, including one level that has dinosaurs in it and another that has a spooky, haunted theme. You'll also get deserts, towns, wastelands, and other appropriately militaristic looks. The weapon effects spit out a lot of particles, which can make the game a bit confusing in spots. But the real showcase is the game's special attack, which is a nuclear blast that creates a great-looking mushroom cloud on the horizon while eliminating everything on the screen. The game has an awesome theme song, complete with lyrics, but the in-game music doesn't shred nearly as hard. Like in other Xbox Live Arcade games, there are 200 achievement points up for grabs in Heavy Weapon, and some of the points can be tough to get. Surviving for 12 minutes in the survival mode, for example, isn't easy.

The single-player game is fun and challenging, and the multiplayer modes give you a reason to keep playing. In short, Heavy Weapon is a good value at 800 points, and fans of arcade-style action should get a lot out of it. 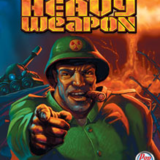