While it has some interesting sequences, and can be really enjoyable at times, more often F.A.K.K. 2 merely seems like the framework for a much better game.

Heavy Metal F.A.K.K. 2 is evidently the work of ambitious designers. The game attempts to combine the best elements of several genres: It looks like a third-person action game, begins like a role-playing game, plays like a platform game, and uses both first-person shooter conventions and fighting-game elements in its combat system. Unfortunately, the game hardly ever goes beyond the surface of any of its influences. What's worse, it's short, unstable, and the control is unresponsive. And while F.A.K.K. 2 does have some interesting sequences and can be really enjoyable at times, more often it merely seems like the framework for a much better game.

F.A.K.K. 2 takes place 30 years after Heavy Metal 2000, the animated film on which it's based. The main character, Julie, and her companions have taken residence on Eden, a planet with magical water that keeps the residents from aging. Though a large energy shield protects the planet, strange things are happening, like an invasion of malevolent bugs. And it soon becomes clear that a greater invasion is imminent. There is some semblance of a continuous story throughout the first third of the game, and it initially keeps the action interesting.

The game is broken into three parts. The first is the best, in which you (as Julie) wander around your city, talk to your neighbors, and perform various tasks for them in exchange for equipment. Though it could have used better dialogue and some more meaningful quests, this open-ended section is a good way to set up the challenges that lie ahead, and Ritual Entertainment did a good job of making Julie's home seem like a living city. Once the siege begins and the city gets ransacked, the game gets even better - you'll need to find creative ways to defeat seemingly invincible foes in a few key scripted sequences. Finally, you'll be sent to the swamps of Eden to begin your quest for the Heart of the We, a mystical artifact that can put an end to the threat.

Things start to fall apart in this swamp, which makes up the second part of the game. F.A.K.K. 2 aspires to have exciting platform-jumping sequences, but it can't compare with the best games in this style. In platform games such as Super Mario 64 and Rayman 2, your tasks gradually get more complicated, as you must find new and innovative ways to use the tools at your disposal. In F.A.K.K. 2, the jumps just get harder. The second part of the game consists almost entirely of jumping puzzles, and they get tedious.

They also get frustrating, because F.A.K.K. 2's control leaves a lot to be desired. Precise jumping sequences require precise control - but controlling Julie seems more like driving a hovercraft. She'll slide off objects when she turns, get stuck on obstacles, and generally bounce around in aggravating ways. What makes the second part of the game even more disappointing is the complete lack of character interaction that helped make the first section seem more substantial than most third-person action games.

Fortunately, the third part of F.A.K.K. 2 is better than the second, perhaps because the level design is more diverse and the jumping puzzles are less monotonous. However, the story has all but disappeared by this time - you merely have to perform a series of nonsensical tasks in four elemental environments - but these environments are good looking, and the levels are interesting. The final boss battle is also satisfying, and the boss itself looks impressive.

In fact, much of the time, F.A.K.K. 2's saving grace is its visuals. The locales always look good, though they aren't always inspired - for instance, you'll have to work your way through a generic factory, full of pistons and conveyors that seemingly do nothing. The game's characters and landscapes are highly detailed, and the developers also did a great job of rendering outdoor areas with id Software's Quake III engine.

The monsters you'll face also look good, though there aren't many of them. You'll fight the same creatures again and again, and the only difference will be slight variations in their strength and attacks. You might initially face a particular enemy as a boss, then once you get more powerful weapons, you'll start seeing that same enemy all the time. This repetition wouldn't be so bad if the combat were more fun.

F.A.K.K. 2 has both ranged and melee weapons, and you can use both at once. What's great about the game's combat is that you can hold a weapon in either hand and use any combination of swords and guns that suits you. It's an unusual idea, and when it works, it can be really effective. Unfortunately, ammo is in short supply on Eden, so you'll typically end up using only your melee weapons. That's not necessarily a problem - the melee weapons are great, as well as intuitive and fun to use. The problem is that you'll often be faced with so many enemies that the more complex melee moves (each sword/gun pairing produces a slightly different combo attack) become virtually useless. You'll frequently find yourself just swinging your sword wildly until an area is clear. And the game's collision detection seems inconsistent, which often makes hitting monsters more a matter of luck than skill.

But if there's one major problem with F.A.K.K. 2, it's that it seems unfinished. The game is rather short, and you could speculate that this is either because the developers had to coordinate with the movie's release on video, or even because some of the game's content was eventually cut. After all, the game has little in common with the Heavy Metal comic and film source material, which is known for its adult content. Ultimately, if you're lucky enough to not encounter F.A.K.K. 2's numerous technical problems, it will likely take you under ten hours to get through the whole game and probably half that to get through it a second time.

The technical problems are worth mentioning in further detail. On every one of the three different test machines we used to play the game, it crashed consistently, if sporadically. It crashed when we saved, loaded, paused, and quit. It crashed when too many creatures were on screen. The crashes were always serious, requiring hard reboots.

These technical problems, in addition to its short length and inconsistent quality, make Heavy Metal F.A.K.K. 2 the most frustrating kind of game: It's only decent, when it could have been great. The designers are clearly talented, as the game has enough original ideas and unique sequences that suggest how much better the entire game could have been, given more time. But instead, F.A.K.K. 2 seems unfinished and unrefined. Apparently, it just goes to show that the old expression about haircuts applies to games as well - sometimes the difference between a bad one and a good one is just a few weeks. 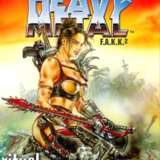 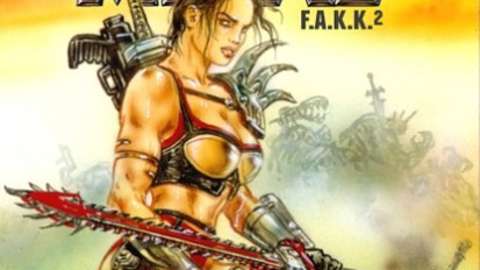 While it has some interesting sequences, and can be really enjoyable at times, more often F.A.K.K. 2 merely seems like the framework for a much better game.