The path to victory in Hearts of Iron can be rewarding, but it can be pretty bumpy too.

Hearts of Iron takes the well-known conflict World War II and, rather than focusing on small-scale, tactical skirmishes like some other strategy and first-person shooter games, instead looks at the big picture. The game spans the entire globe from 1936 through 1947, roughly following the outline of the actual war but letting you fill in the details. You get to play as any nation and focus not merely on military might, but also on diplomacy, research, and economics. Hearts of Iron was developed by Sweden's Paradox Entertainment, creators of the Europa Universalis strategy series. Like those games, Hearts of Iron is big, complex, and definitely not for a casual player seeking a little light entertainment. But, if you have the time and determination to delve into the game's nuances and can look past its many faults, it can be an engaging game.

Hearts of Iron attempts to shoehorn traditional grand strategy, which has long been the province of turn-based gaming, into a real-time format with only partial success. The game's interface can at times be clumsy, cluttered, or counterintuitive, and it often bombards you with too much information, or it doesn't give you enough. You can change the way the game displays some information, but doing so can be a chore in itself.

Hearts of Iron doesn't seem like a complete game, since it ships with an essentially unfinished manual and its in-game tutorials are mediocre at best. Some of the pop-up tooltips in the game are either blank or are simply redundant or uninformative. Worst of all, Hearts of Iron is buggy and prone to crash. You'll need to save your game often, or you risk losing a string of hard-won victories to the game's capricious code.

That's not to say that Hearts of Iron is all bad--quite the opposite, in fact, since it offers lots of entertaining gameplay possibilities. While it's a real-time game, it still looks and plays like a traditional turn-based strategy game in a lot of ways. The main window features a prominent global map that you can zoom in and out on. The map is divided into countries and subdivided into smaller provinces or states that form the basic strategic building blocks of the game. Surrounding the world map, you'll find an array of status indicators, message boxes, and icons that open numerous detailed data screens.

Beginning from 1936, 1939, or 1941, you can play as any country in the world, though playing as a tiny nation like Paraguay will likely be boring and futile, if not downright silly. There's just too little to do diplomatically, economically, and militarily for many nations. Whatever country you choose, your ultimate goal remains the same: conquer as many nations as possible for your country or your alliance.

Given Hearts of Iron's focus on major affairs of state, long-term decision making, and the movement of whole armies of troops, it's somewhat odd and unfortunate that the game plays out in real time. It's true that you can slow the game speed and issue orders while paused. You'll really need to do both if you want any chance of making informed decisions while managing the countless factors under your control. A turn-based system likely would have made the constant flow of information more manageable and could have given more structure to the gameplay.

One beneficial thing about Hearts of Iron's real-time gameplay is that it can reasonably simulate the coordination of military units better than a turn-based design might. One of the most unusual and interesting features of Hearts of Iron is its combat coordination box. When you engage an enemy unit, this box will appear and let you choose different tasks for your attacking units. A land unit might be able to blitz (attempt to crash through enemy lines in a high-speed armored or mechanized attack) or feint (probe to discover enemy force compositions but withdraw before the fighting gets too heavy). Depending on their composition, air squadrons might be able to carry out tactical or strategic bombing missions, drop paratroopers, and more. Naval units also enjoy a number of different options, including patrolling to interdict enemy supply convoys (which you can also set up and manage for your own country).

With the combat coordination box, you can actually set the desired arrival time of each friendly unit into an enemy province. This way you can, to a degree, simulate the sorts of combined-arms maneuvers that characterized World War II. For instance, you can send a Panzer division with tactical air support roaring into an enemy province a few hours before your infantry march in.

While Hearts of Iron plays out in pausable real-time, the combat is handled internally on a round-based system, with new calculations made each game day at noon. One of the interesting things about the game is that there's a lot going on under the hood--every unit has numerous statistics, and every combat engagement takes several factors into account--but you don't have to busy yourself with all that if you don't want to. You can carefully consider leadership, supply, terrain, and numerous other factors before making an attack, or you can adopt a more simplistic "tank rush" approach and just try to mass troops and outnumber your enemy. You can often succeed either way.

Unfortunately, despite the interesting possibilities that the game's combat coordination box offers, Hearts of Iron's battles actually turn out to be rather uninvolving. The game does a weak job of relaying the progress of an ongoing battle, let alone creating any drama. In essence, friendly units move into a province containing enemy units, and you wait a little while for a message to appear onscreen declaring the winner.

The AI plays inconsistently too, sometimes pulling off sound and unexpected maneuvers but also repeatedly and unsuccessfully hammering the same province piecemeal instead of seeking a more creative or sophisticated alternative. In addition, the AI will sometimes foolishly let you sail whole armadas right up to its ports and then do nothing about it unless one side has formally declared war on the other. "Sneak attacks" were never easier. At least there's an option for LAN and Internet multiplayer if the AI doesn't suit you.

While most of Hearts of Iron's gameplay ultimately revolves around military conquest, the game offers plenty of other things to do in support of your military aspirations. You need to manage your economy and industry, for instance. The basic unit of strategic currency in Hearts of Iron is industrial capacity, or IC. Your maximum IC will depend on the number of provinces you control and their level of industrialization.

To put your IC to good use, you need to gather the game's four resources: coal, steel, rubber, and oil. You can find some of these within your country's borders at the start of the game, but you also need to engage in conquest and trade to acquire more of them. Unfortunately, the trade screen isn't as immediately clear and easy to use as it should be, and the game's cluttered research screen is even less easy to use.

Along with economics, you'll get to delve into the realm of diplomacy. You automatically accrue diplomatic influence points on a regular basis. You can earn bonus points through territorial conquests, spectacular military victories, and diplomatic coups, like annexing a nation or installing a puppet regime. You can then use these points to influence the political alignment of other nations toward your own, though you unfortunately don't get to delve into the details of how that's done. It would have been fun to engage in the nuances of diplomacy, particularly when playing as some of the more characteristically ruthless nations, like Germany or the Soviet Union.

Still, you do get plenty of general diplomatic options overall, like sending expeditionary forces, demanding territories, and sharing research. And despite its weaknesses, the diplomacy feature can be one of the more entertaining elements of the game. A protracted war of attrition between France and Germany, for example, can suddenly shift dramatically when Germany convinces Spain to join the hostilities and invade France from the south.

Visually, Hearts of Iron is reminiscent of the Europa Universalis games and looks generally decent, but not much better than that. The map is reasonably colorful, and it's nice to see some period photos gracing some of the information screens. Your units are represented by simple icons (or optional NATO symbols) with rudimentary animations. Overall, the graphics just barely get the job done, and they offer nothing that captures and holds your attention, let alone anything that grips you emotionally.

The audio is equally workmanlike and does comparatively little to establish any WWII ambience--you'll hear the sound of marching boots as an infantry division moves, for example, but little more. The game's orchestral score is more interesting and entertaining, since it exclusively features pieces of European classical music. The music, which cycles unabated unless you turn it off, can lead to some unintentionally amusing coincidences, like the cannons in Tchaikovsky's "1812 Overture" sounding at the exact moment Germany declares war on Poland in the game.

However, the actual selection of music seems almost random. It's certainly fitting to hear bombastic orchestral excerpts from Wagner's operas, but Bach's jaunty "Badinerie" for flute seems remarkably out of place, as do quite a few other selections. The designers could have made far more appropriate choices, choosing ominous or martial-sounding pieces by Shostakovich, Prokofiev, Holst, Janácek, Bruckner, Mahler, or a host of others.

This sort of awkwardness seems to characterize Hearts of Iron on the whole. It's a game of potential realized and potential wasted. The path to victory in Hearts of Iron can be rewarding, but it can be pretty bumpy too. 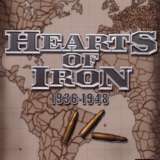 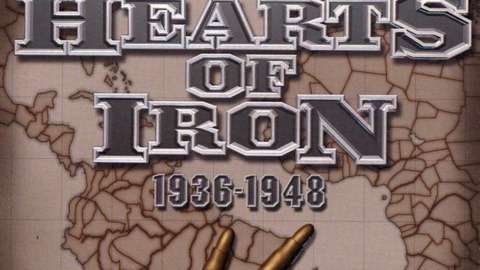 The path to victory in Hearts of Iron can be rewarding, but it can be pretty bumpy too.