If not for lingering issues with the steep learning curve, the barrage of information boxes, and a couple of bugs, this would undeniably be Paradox's finest hour.

If there were a hall of fame for great game concepts, Hearts of Iron would be a first-ballot inductee. But moving the strategic themes and historical depth of the Europa Universalis series to World War II was such a surefire idea that developer Paradox Interactive forgot the actual game. The resulting release was decidedly problematic, with a modern setting shoehorned into a design built for the era of muskets and pantaloons, artificial-intelligence holes the size of the Bismarck, and loads of bugs. However, the new Hearts of Iron II shows that Paradox has learned from its mistakes. Although the game follows its predecessor so closely that you may still want to play with mouse in one hand and textbook in the other, many refinements and additions make the intimidating interface and extraordinary depth almost user-friendly. If not for lingering issues with the steep learning curve, the barrage of information boxes, and a couple of bugs, this would undeniably be Paradox's finest hour.

This is still not a game for the faint of heart. You oversee the affairs of an entire nation in the World War II era, with all that such a weighty responsibility entails, in real-time single-player or multiplayer campaigns. So not only do you send tanks streaming across borders, but you also build the economic infrastructure necessary to keep bullets flying and stomachs full, set up trade deals, and send out diplomats to handle a list of assignments from proposing nonaggression pacts to sponsoring coup attempts. As in Paradox's other games of historical grand strategy, time spent waging war on the battlefield pales in comparison with time spent planning and building. If you're looking for the second coming of Axis & Allies, keep looking.

Still, concessions to playability make Hearts of Iron II more accessible than the usual Paradox release. The manual is far better than the confusing, useless tome packed with the first Hearts of Iron, and the six tutorials offer up details on primary aspects of play like warfare and production. Only information overload remains a problem. The learning curve is more like a learning cliff. Even after you think you understand the core concepts, you start a game and get snowed under by a blizzard of pop-up information boxes. Mengkukuo has joined Japan in the war on Sinkiang. Canada has barely influenced the foreign policy of the United States. Colombia is remaining neutral in the war between Peru and Ecuador. The Netherlands suggests a trade agreement with us. The United Kingdom announces the death of its foreign minister. And so on. And so on. And so on.

It's incredibly overwhelming. Even after you get used to it--yet again, because Paradox has used a variation of this clunky interface in all of its historical strategy games--you can't help but grumble that there has to be a better way to keep players in the know. Although you can adjust the number and type of these notices, there isn't a happy medium. Whether you choose to wade through everything or turn off a number of categories, you will almost certainly miss a dire announcement or two. Tweaking the message frequency so you reach some level of satisfaction with the alerts shown is almost a game in itself. Three or four scenarios must be played to completion before you'll be able to get an idea of what works for you.

You can at least focus your warmongering now. While Hearts of Iron II centers on four sprawling campaigns, you can select a limited conflict with set adversaries if you're not in the mood to set the entire world ablaze between 1936 and 1947. Some of these battles are standard WWII fare, like the D-Day landing and Operation Barbarossa, but others are off the beaten path. You can even take part in the fictional Platinean War between German puppet Argentina and American puppet Brazil, for instance, or in a full-scale "what if" German invasion of Czechoslovakia.

These smaller scenarios also serve as extended tutorials. Many feature two-sided hostilities, and most involve accomplishing a single objective. Sometimes you can even ignore whole aspects of the game. When you're fighting the Platinean War, for example, supplies are regularly delivered from the US and Germany, so you don't have to worry about gathering the resources needed to build armies. The only catch is that it's difficult to step up from these scenarios to the full-fledged campaigns, as there isn't a middle ground. You're forced to go from regional engagements straight to governing a nation taking part in the biggest conflict in human history.

Thankfully, it's never been so simple to wage global war. Ground combat is considerably easier to manage, thanks to the addition of support options allowing neighboring units to aid an attack without taking part in it. This way you don't have to throw all your troops into harm's way and can maintain an orderly front line. Units can also be ordered to stand in reserve, ready to step in and replenish the strength of adjacent allies. And ships and planes can be given mission orders now. This allows you to automatically try to gain air superiority over a designated region, to bomb an enemy's industrial infrastructure, or to clear an area of enemy naval traffic.

Other aspects have been simplified as well. Instead of painstakingly researching advanced technologies piece by piece, you now select a team of engineers or an individual visionary and assign a task like developing a tank or coming up with a new plan for regimental combat teams. These teams and personages are historically accurate, too, so the Germans can call on the Krupp factories for armaments research and the Americans can ask General Dwight Eisenhower to work on land tactics for troop deployment. Production is also virtually free of the original game's micromanagement headaches. Slider bars control the entire production network, so you can easily ensure that you have enough material assigned to consumer goods, production, supplies, reinforcements, and upgrades.

Each of these changes makes Hearts of Iron II more modern than its predecessor, which preserved too much of the Europa Universalis II engine. You feel like you're commanding a modern, mechanized force that can operate on the land, on the sea, and in the air, along with the industrialized economy that powers it. It's far easier to appreciate the vast scope of play, as you're not as bogged down in minutiae. You can now see the incredible range of options that the design affords, and get wrapped up in marathon sessions, each one wildly different from the last, even if you're playing as the same nation. Even Germany, for example, has dozens of approaches open to it. In successive games starting in 1936, we tried the passive diplomatic route, rapidly and aggressively built a military juggernaut, and saved our pennies to sponsor coups in Poland and Czechoslovakia, all with varying degrees of success.

The only issue we noted was a tendency for the artificial intelligence to play it safe on the lower and medium difficulty settings. Major military buildups, aggressive positioning of armies on borders, and even some outright invasions were often met with a shrug. Nations also didn't produce enough military units. France, for example, was usually woefully unprepared for a German assault, even if the Nazis had triggered a "preparation for war" event by sending troops into the Rhineland in violation of the Treaty of Versailles. Also, we encountered a few quasi-historical developments that practically seemed hard-coded. Most were of the expected "that's almost the way it really happened" sort, like the above situation with the French. But others were decidedly odd. China, for instance, recovered from its devastating civil war almost immediately in every game that we played, and rapidly became a powerhouse that steamrolled Japan.

It's too bad that the new design philosophies weren't applied to the graphics and sound. This engine is as old as the hills in computer-game years, and looks it. Units are poorly animated, and the map features the same colored nation blobs as seen in Europa Universalis in 2001. Also, you can't scale the screen resolution. The game plays at a fixed 1024x768, which is disappointing, since the first Hearts of Iron supported multiple resolutions. This technical limitation will annoy anyone with an LCD monitor that has a different native resolution, as interpolation turns text into clunky, Lego-like blocks. The audio will annoy anyone with ears. The martial music gets grating after five minutes, and there are virtually no sound effects other than the stomp of armies on the march.

And what would a Paradox game be without release bugs? There are serious flaws here, including occasional drops to the desktop and an irritating intermittent-screen-flickering issue that defied all our attempts to solve it. Also, Valkyrienet support for online multiplayer seemed to be missing in action, as we were never able to log on and find an active channel for the game. This is still a much more stable product than its predecessor, but that isn't really saying much.

Even with these problems, Hearts of Iron II fulfills the promise of its predecessor. Paradox has done a tremendous job of making this complex design relatively easy to get into. If you can stumble through the first couple of hours, the blanks will fill in and you'll find yourself in an all-night struggle to take the Wehrmacht to Moscow, or to conquer the last few holdout provinces in China with the Japanese Imperial Army, or even to tiptoe around the combatants and keep Spain neutral. This is what the original game should have been. 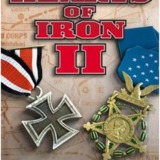 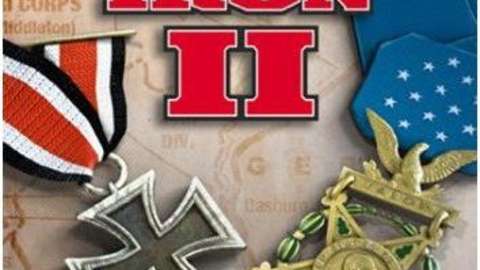 Hearts of Iron II lets you guide a nation through the battles of World War II. Much like the first Hearts of Iron, this sequel lets you control one of more than 150 countries and travel around the entire world.