The key to understanding Hearthstone lies in its very name. Not only does it refer to the white-and-turquoise rock that has sent the World of Warcraft faithful back to inns since 2004; it also suggests friendly competition far removed from the battles and weighty stratagems of other collectible card games. Its cozy syllables evoke not laborious campaigns lasting hours, but quick matches that take no longer than it takes to gulp down a mug of ale. If World of Warcraft is the everyman's massively multiplayer online game, this is the everyman's collectible card game, and for the most part, Blizzard has justified the fanfare that erupted when it first appeared last March.

Few other card games rival its personality, which reveals itself in the little things, such as the way you can tap iron gongs and fiddle with water mills on the board in the 90 seconds when you're awaiting a challenger's next move, or in the way a chorus of rough-and-tumble dwarves and orcs erupts in cheers when you've made a good move. You find it in the flashier details as well, such as the way the mage's arcane missiles pelt enemy heroes with sound files yanked from World of Warcraft, or in the way some of Warcraft's most exaggerated figures guide through a tutorial that's as helpful as it is fun. The emo night elf Illidan from Warcraft III and WOW's Burning Crusade expansion wraps up the swift campaign, still spouting his convictions that we're unprepared.

That may well be true for card gaming tenderfeet, but it rarely matters. One of the great strengths of Hearthstone is that it embraces players who shied from the know-it-alls at Magic: The Gathering events in comic shops or missed the heydays of Pokemon and Yu-Gi-Oh. What's more, it caters to players burned by the caustic personalities in multiplayer games like League of Legends and Dota 2 by limiting communication with random players to preset responses. (Friends can chat with and battle each other, but to prevent exploits, these matches offer no form of reward or advancement.) In true Blizzard form, Hearthstone shatters barriers to entry while supplying the means to access greater challenges if you seek them.

Indeed, card gaming veterans will find much to love beyond the cheesy puns and happy aesthetic. Hearthstone adopts the familiar model of whittling down the opposing player's hit points with attack points from cards, but it simplifies the often cumbersome resource mechanics of other games for a mana bar that automatically expands with the passing of each turn. It's a system geared toward speed, and hero abilities that don't depend on cards--like the mage's fireball--act as wild cards that can keep you in the fight even when surrounded by minions. It's a lunch breaker's game, and indeed, the toughest matches rarely last more than 15 minutes.

Blizzard manages to bless Hearthstone with significant depth in spite of such nods to speed. There's a wide assortment of cards with specific abilities in play here, some of which are part of the nine unlockable decks modeled on familiar World of Warcraft classes, and others of which come with the massive bundle of cards that you can use with all the decks. Using the hunter deck, you might spring a trap by unleashing three weak snake cards after an enemy attacks his or her minions; your opponent might fend off the attacks by tossing down a tanky card with "taunt," thereby forcing the snakes to attack the taunting card instead of the main hero. But still further strategies await: your mage could incapacitate the taunting card with a frost nova, thereby letting you have a go at your opponent's hero.

All this worked well when beta invites shot out a year ago, but Hearthstone now enjoys a commendable degree of balance in the wake of months of tweaks and player suggestions. It's more apparent in the early levels, when most challengers you meet haven't built powerful decks through their winnings from daily quests and simple leveling, but flashes of it remain at higher levels when players start slapping down legendary cards with alarming frequency. Hearthstone's class decks perform a little of the same service as alts in an online role-playing game; once you get tired of one class, you can jump on another and start leveling it from scratch for a varied experience.

Over time, perhaps inevitably, the process of leveling and building killer decks devolves into a grind. Blizzard gives you the option to craft your own cards to counter it, although it's here that the veterans enjoy a significant advantage over card-gaming rookies. Hearthstone simplifies many of the necessary actions, such as destroying excess cards and neatly arranging the available cards in a flipbook of sorts, but the uninitiated get few clues as to what to focus on. In the worst cases, you might waste your material on a worthless card or (the horror) accidentally disintegrate one of the best in your deck. Nevertheless, card crafting is a good way to fill in the gaps for the unlucky. If you can't get a card to appear from the packs you buy through your winnings (or indeed, real-world money), you can usually make it if you have the materials.

The best way to break this tedium is to break into the Arena mode. Arenas come with an entry fee, although it's usually negligible if you manage to complete the daily quests, which have you doing things like winning matches with a specific deck or dealing 100 damage to enemy heroes. The allure of Arena lies in the leveling of the playing field. Rather than bringing your own decks into the battle, you're only allowed to choose from one of three classes, and then you need to build your deck by choosing one of the random cards Hearthstone throws at you until you complete a full deck of 30 cards. The outcome can still be outrageously imbalanced. Some schmuck might swim in legendary cards, while the one you have never gets drawn from the deck. Of course, it works both ways. The next Arena match could shower you with legendaries like Ragnaros instead.

As is the case with any collectible card game, a degree of randomness affects each action in Hearthstone. It's possible you'll end up with nothing but sorry cards beyond the capable starter decks--I suffered the same fate after I lost my godly deck in a planned wipe halfway through the beta--but there's always the chance of scoring big as well. Still, that randomness might drive players to toss some cash at Blizzard for new card packs (priced at $1.50 each), but the beauty of Hearthstone is that you never feel much if any need to fork out cash. It's a free-to-play game in the best sense of the word, and even the interface for unloading your cash is more stylish than it normally is in such ventures.

Hearthstone features no built-in spectator mode, nor does it offer a replay mode, which could have been helpful in learning from your mistakes. Features such as team battles that make Magic's digital duel games so fun make no appearances here, and the daily quests take long enough to complete that you'll sometimes want to spend cash if you want to play in the Arena. But such objections are minor in light of the breezy but brainy experience Blizzard delivers here, particularly for the massive segment of the populace that's never played a collectible card game. If it's dumbed down, then it's in good hands. If any developer's good at weeding out the chaff of more robust games in a particular genre, surely it's Blizzard.

View Comments (53)
Back To Top
8
Great
About GameSpot Reviews

Leif Johnson was originally one of those folks who shied away from Magic: The Gathering events, but eventually he got over it. He’s enjoyed the renaissance of sorts that collectible card gaming has enjoyed with new digital games, and he prefers to play with Hearthstone’s Hunter deck. Leif has been playing Hearthstone since the first beta invites went out last year. 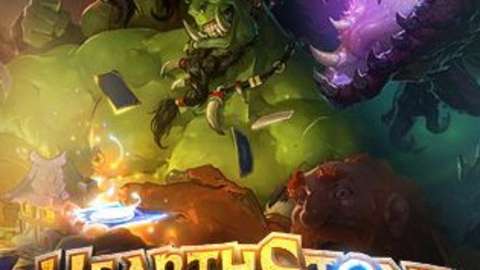 Hearthstone is a free-to-play digital strategy card game where you can choose one of nine epic Warcraft heroes to play as.