More Friends of Mineral Town is merely the original game with a female lead and male suitors. This being said, the game still holds up nicely.

Harvest Moon: More Friends of Mineral Town is best described as a farming role-playing game. One day, your character decides to leave the big city and buy a rundown farm. Your goal is to work it back to abundance. You'll do this primarily by sowing fields, growing crops, and raising livestock, but along the way you'll also interact with the locals, learn how to cook, dig ore and treasure out of nearby mines, and participate in community gatherings. You'll even land a husband and give birth to a child, if you choose to do so.

Managing crops and livestock is at the heart of every Harvest Moon game. The fields need to be cleared and tilled, seeds need to be planted and watered, and animals need to be bought, mated, and cared for. Your character has all of the right tools for getting these jobs done--a hammer, an axe, a hoe, a watering can, a scythe, and a fishing rod. As time goes on and you add livestock to your farm, you'll acquire new tools, such as a brush, a milking apparatus, a fishing pole, and a calling bell. In a traditional RPG, you'd gradually upgrade your character's spells and armor over time. Here, you can upgrade your tools and real estate. Tools gain levels when you use them, which in turn makes them more effective. You can also take the money you earn from selling crops and put it toward the purchase of upgrades to the house, barn, and chicken coop. Enlarging the barn and chicken coop will allow you to take care of more horses, cows, sheep, and chickens. Meanwhile, the house can be expanded and filled with furniture and appliances. There are even multiple window styles and mailboxes to choose from.

Using tools and performing tasks is fairly simple. To use a tool, you press or hold the B button. To pick up an item, such as a head of lettuce or a piece of ore, you press the A button. To drop items into the shipping bin, you walk up to it and press the A button. To talk to people, you also press the A button. About the only time an action requires more than a single button press is when you need to swap items in your inventory or participate in a minigame. There is a running time clock that limits what you can accomplish each day, however. You also have to keep track of your character's stamina level, which drops every time you use one of your tools. If it drops to nothing, she'll pass out for a few hours. Conveniently, you can regain stamina by eating food items.

The time clock is sometimes a nuisance, since it limits how much you can accomplish on the farm each day, but it's also put to good use duplicating the seasons and triggering special events. For every 10 seconds in real time, 10 minutes pass by in the game's universe. At around 9pm at night, you have to put your character to bed, or she'll oversleep the next morning. Time doesn't advance while you're inside of structures or participating in minigames, which is great because you can talk to people, goof off, and grab a few goodies without cutting into your farming time.

How long a single day lasts is pretty much up to you. If you spend most of your time tending the crops, a typical day only takes about five minutes to complete. If you go into the barn to milk your cows, head into town to interact with the villagers, or enter into the mine to dig for ore, you can easily stretch a single day into 20 or 30 minutes of playing time. Each season lasts roughly 30 days in game time, and the kind of seeds you can plant and the events that happen around town vary, depending on what season you're in. Over the long term, the leaves and weather change, and animals will get bigger and grow old. A full year can take anywhere from 10 to 60 hours in real time to complete, which gives the game nearly unlimited replay value since there's no limit on the number of years you can play.

Aside from tending the farm, there's plenty to see and do in and around Mineral Town. You can pop into the stores and houses in the village and interact with the locals. Each store has its own open hours and off days, and the villagers all have individual daily routines. You'll see them hanging out on the street, heading to their jobs, or chilling out in their favorite hangouts at regular, appointed times. Buy a rubber ball or a Frisbee and you can play a fetch minigame with your dog. Throughout the year, there are festivals to take in and competitions to enter, which involve minigames themed around horse racing, Frisbee tossing, chicken sumo, and animal grooming. A family of harvest sprites lives in the northeast corner of the village. There are three more button mashing-style minigames to play in their house. The minigames improve their farming abilities, which rocks, because you can then hire the sprites to tend your farm when you want to take some time off.

Social interaction is also a fairly big deal. Individual people's opinions of you will change depending on how often you talk to them, what you say to them, and the kinds of gifts you give them. Food gifts are particularly significant to the denizens of Mineral Town. Once you install a kitchen and buy all of the necessary cookware, you'll be able to mix, combine, and cook more than 100 unique recipes just by combining the crops you harvest with items purchased from the shops in town. Everyone loves a good cook, especially the town's bachelors. There are eight young and very eligible men living in town, and by giving them gifts and talking to them, you can kindle relationships that will eventually result in one amorous suitor popping the question. You'll see numerous relationship-oriented cutscenes along the way, culminating in a festive wedding celebration. A baby will join the household a few years after that, and you'll get to watch it grow from a defenseless tot into a precocious toddler. That's the extent of the game's life cycle, however, as your husband will never die and junior will never grow up and leave the house, no matter how many years you play. Neither of them ever helps out with the chores, either.

Now, since this game is technically two years old, it doesn't employ the latest and greatest visuals or audio that we've seen recently in RPGs like Fire Emblem and Riviera. The tiny, squat character sprites don't have much in the way of animation, except for walking, and the colors are washed out and dull. There's a moderate amount of detail evident in the background, mainly in how the colors of the trees and grass change throughout the seasons. The background lightens and darkens as daylight changes throughout the day, which is a nice touch. So are the itty-bitty footprints that the characters leave in the snow during wintertime. By the same token, the audio isn't earth- shattering, but it is pleasant enough. There are different theme songs for places like the farm, the forest, the village, and the caves...and they change depending on the time of day and season. Different sound effects are used to portray weather, such as wind, rain, and snow. Also, digitized sound samples give the animals in the game the ability to "bark," "moo," "caw," and otherwise call out when you interact with them. 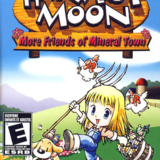 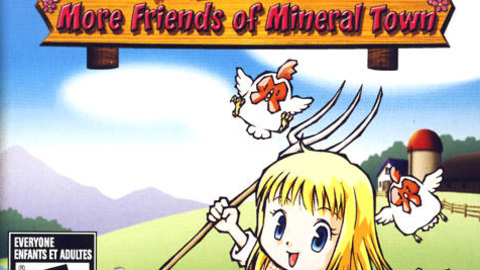 Everyone
Use of Alcohol