Island of Happiness offers plenty of satisfying farming gameplay, but the controls will leave you decidedly unhappy.

It was over 10 years ago that the first Harvest Moon game came out on the SNES, and in keeping with the series' sports-game-like longevity, Natsume is releasing two new Harvest Moon games this month, Island of Happiness for the DS and Tree of Tranquility for the Wii. On the DS, you get classic Harvest Moon gameplay on the go--and controls so slippery, it feels like you’ve replaced the stylus with a stick of butter. Rest assured, the same dependable farming sim is here, but the awful controls make it hard to enjoy.

The story has always taken a backseat to the gameplay in the Harvest Moon games, and this one is no different. Your impetus for farming is a shipwreck at the start of the game. After washing ashore on a deserted island, you run into a small group of survivors who, instead of searching for rescue, are turning the barren patch of land into a bustling community. The characters who populate the world are interesting and varied, though much of the dialogue and interaction with them is optional, so if you'd rather focus on farming, you can do that without being forced to be social.

If you've played a Harvest Moon game before, you'll know exactly what to expect when it comes to farming. Things will start slowly in your first year--money is tight and resources are slim--but as your land expands, so will your opportunities. In addition to the various crops to tend, you'll have chickens, sheep, cows, and other critters to look after and upgrades to make on your property. You can even get married and have kids, though that's a bit creepy since your onscreen avatar never looks a day older than 11. With new responsibilities popping up all the time, you'll never be without something to do. Within a few in-game years, you'll see the island go from a decrepit floating rock to a thriving metropolis. Natsume has managed to cram a lot of content into the game, giving you an almost endless number of things to care for, tend to, and make money off of. The challenge in this particular Harvest Moon game is finding the motivation to play that long.

Like all the other games in the series, at its core, Island of Happiness is a game about doing chores. Past Harvest Moon games were charming enough to keep us pulling weeds and milking cows all day. Island of Happiness certainly has that trademark Harvest Moon charm, but the touch-screen controls are such a chore themselves that they ruin the experience.

You guide your farmer around by holding the stylus in the direction you want to move, and you interact with objects and people by tapping on them. This control scheme has worked beautifully in other DS games, but it doesn't fit the time-sensitive demands of the Harvest Moon series. You'll constantly drop items you need, pick up items you don't need, water the wrong patch of land, make the wrong choices in menus, and generally waste valuable time and stamina. Had there been an option to use the D pad, Island of Happiness would have been a much happier place to spend time; instead, the D pad is used to map four items to each direction for quick access. Like the touch-screen controls, the item mapping doesn't work as well as it should. Once an item is equipped, you still have to either press the direction on the D pad to use it or tap the icon. The icons are small and the controls are so sluggish that you often accidentally select the wrong item or turn your farmer in the wrong direction. The imprecise and unresponsive controls make nearly every task a frustrating ordeal.

Island of Happiness looks great compared to the last Harvest Moon game on the DS, which was really nothing more than a Game Boy Advance port. The game blends 3D environments with simple 2D sprites, and though the character animation is rigid, the overall look is pleasing. The scenery is vibrant and spacious, and each season brings in new colors and crops. There is a bit of missed potential with the top screen though, since it does nothing but display a basic map the entire time you're playing. The music is bright and cheerful and never gets in the way. Ambient sound effects like crickets in the summer or rain in the spring make the world seem alive.

Not a lot has changed in the Harvest Moon series, and it's unfortunate that the new features introduced in Island of Happiness, with the exceptions of online leaderboards and voice chat, are mostly to its detriment. The controls aren't so bad that the game is unplayable, but you'd be better off picking up one of the many older and better games in the series. 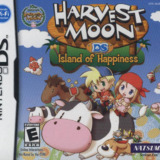 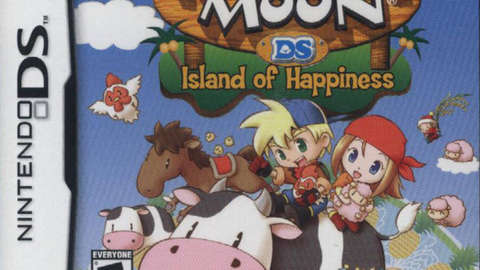 The Harvest Moon series takes to the sea and gets shipwrecked! Now you must build a new life on an island, and explore the mysteries of its previous inhabitants.

7.6
Sign In to rate Harvest Moon DS: Island of Happiness