Aside from including some half-baked touch-screen features, Harvest Moon DS does nothing to set itself apart from previous games in the series.

There's a lot to do on the Nintendo DS. You can be a surgeon, a trial attorney, a chef, and much more. Now there's another virtual profession on the list: farmer. Natsume's long-running series of Harvest Moon games has made the jump to the dual-screen handheld. However, it doesn't feel like much of a jump. The game makes very slight use of the unique features of the DS and doesn't look any better than the previous Harvest Moon game did on the Game Boy Advance. These shortcomings aside, it's still very much the same old farm, with the same characters, the same crops, and the same animals. If you're a dedicated fan of the series, that might sound great, but it's difficult to justify the price of a new game when there isn't anything significantly "new" about it. For newcomers to the farming life, Harvest Moon DS is as good a place to start as any, although it doesn't measure up to other DS games in terms of presentation and noteworthy features.

As if raising robust livestock and sweet, golden ears of corn weren't enough reason to be a farmer, Harvest Moon DS attempts to ply you with a story of sorts. It turns out that the Harvest Goddess and the Witch Princess have an antagonistic relationship, so one day the witch decides to put a spell on the Harvest Goddess to shut her up. Something goes wrong, though, and instead of simply silencing the Harvest Goddess, the spell sends her to another dimension. Together the witch and the helpful harvest sprites have to bring back the Harvest Goddess. But they can't do it alone; they need your help to revive the goddess by raising crops, falling in love, starting a family, and generally being a productive all-around citizen.

You start as a young boy in Forget-Me-Not Valley, and after a brief introduction, you're dropped on a farm and left to do what you please. You start out with a large farm where you can plant and harvest crops and gather materials such as wood and stone. Once you have enough materials, you can construct buildings such as chicken coops and barns so you can begin to raise livestock and gather the wool, eggs, or milk your animals produce. There's also a full town to explore, with a mine where you can find ore, and unclaimed fields where you can gather items such as fruit and flowers. Everything you collect, from the vegetables you grow to the weeds you pull, can be sold to earn gold. You can then use that gold to expand your farm or purchase gifts for a lucky girl, witch, or even a mermaid that you want to be your wife.

There are plenty of familiar faces populating Forget-Me-Not Valley, so you can mingle with folks like Gustafa, Popuri, Muffy, and many more characters that have appeared in previous Harvest Moon games. You can give people gifts, do business with them, or just chat it up to see what's going on in town. Several characters are available for you to court, marry, and eventually begin a family with. It takes time and persistence, though, since each girl has specific likes and dislikes that you have to pay attention to if you're to win her favor.

Everything in Harvest Moon DS takes place on the clock. Each day, special events occur, crops and livestock mature, and weather changes. With only so much time in a day, you have to manage your chores carefully, but you also have to take care of yourself, because if you work too hard, you'll pass out and lose the rest of your day as you recover. It's a delicate balance that can be difficult to get used to at first. However, if you have previous experience with Harvest Moon games, you'll quickly settle into a workable routine. The problem is that the day-to-day chores aren't fun or challenging, so you have to be able to put up with a lot of tedious, repetitive tasks. At first it can be strangely addicting to literally reap the fruits of your labor, but the game goes on for years, and the task-reward cycle wears thin because nothing much changes as the game progresses.

For better or for worse, Harvest Moon DS feels just like previous Harvest Moon games. You might expect some new features to be added to take advantage of the touch screen, but that isn't the case. The bottom screen is used mostly for inventory management. You can see the contents of your rucksack and drag and drop items as necessary. However, it's just as easy to keep the stylus holstered and use the shoulder buttons to equip different items. You can get a glove later on in the game that lets you interact with your animals via the touch screen. When you have this glove equipped, you can walk up to an animal and press a button to initiate a minigame where you have to pet your animal for several seconds to make it happy. It's a brief and uninteresting mechanic that brings nothing to the game, and after using it a couple of times, you'll probably never use it again.

Another new feature in Harvest Moon DS involves playing casino games with the harvest sprites. As you complete your tasks and find more harvest sprites, they'll populate a miniature casino where you can go play poker, blackjack, or a card-matching game to win medals. The medals you win can be exchanged for special items, or you can use the medals to hire harvest sprites to work for you. For example, if you need to free up your time for other endeavors, you can hire a crew of harvest sprites to water your crops for you every day. The minigames aren't engaging, but they're a welcome break from the tedium of doing chores.

Beyond the couple of minigames, Harvest Moon DS looks and sounds like a Game Boy Advance game. The characters all look the same as before, the town is small and not especially interesting, and compared to other 2D games on the Nintendo DS, the animation is clunky and the world lacks detail. The sound effects are all simple, and the generic, inoffensive music loops endlessly until you eventually tune it out.

Harvest Moon DS is a lukewarm foray into the world of farming; it's likely to please fans of the series but will leave everyone else scratching their heads wondering what all the fuss is about. The repetitive, menial tasks get old quickly, and there's not enough challenge or reward to make the required investment of time and effort worthwhile. Plus, there just isn't anything remarkably different about Harvest Moon DS. It's essentially the same game that came out years ago on the Game Boy Advance, with some useless touch-screen features added on. The bottom line is that there are much more interesting and engaging ways to spend time with your DS. 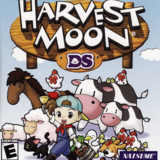