Harvest Moon: Back to Nature Review

Harvest Moon: Back to Nature is surprisingly one of the most satisfying role-playing experiences to be found on the PlayStation. Instead of following the standard flashy FMV, save the world formula, Back to Nature involves you in the day-to-day tasks of running a farm, maintaining friendships, and building a family in a not too flashy but thoroughly involving manner.

The game brings you to your grandfather's farm, which you've recently inherited, in the sleepy town where you spent your vacation ten years ago. Offered a three-year trial by the mayor and the townsfolk, it is up to you to restore the homestead to its former glory and productivity, as well as earn the admiration and affection of the citizenry. These goals go hand in hand, as the citizens provide you with additional help and greater doses of love based on how well you've rebuilt your farmlands and how often you shower them with presents. A generous neighbor does well in Back to Nature, and only the most charitable of play styles will give you access to all that the townsfolk have to offer.

A great farmer needs a great wife, and wooing one of the local girls is one of the most enjoyable aspects of Back to Nature. With five girls to choose from, each with different likes, dislikes, schedules, and birthdays, it's a lot to keep track of. The quickest way to your chosen paramour's heart is by stalking her day and night, appearing at all her favorite spots, and showering her with gifts at every turn. At first, she may seem annoyed, even scared, but your constant attention will eventually turn her black heart a rosy shade of red on your love indicator, which is conveniently visible during dialogue. At this point, you may offer her a blue feather, as local custom dictates, and take her hand in marriage. Wedlock means no more late nights at the bar, more constant female attention, and eventually a baby.

Back to Nature has one of the most enjoyable sets of characters ever featured in a role-playing game. What makes them so intriguing are not their limit breaks, elemental bent, or how deep they are steeped in political intrigue. Instead, they each have relationships with each other, and those relationships are affected by your involvement with their respective friends and families. The characters are emotionally real, becoming jealous if you try to steal their girl, happy if you marry their daughter, sad if you turn them down for a date, and so on. Several of the characters in this seemingly simple game have fairly realistic characteristics, drinking themselves to sleep every night, running away from home, and participating in the local cockfights. The possibility of courting and marrying a girl afflicted with raging alcoholism was a nice touch. While the gravity of these situations is questionable more often than not, they do add an atmosphere of mock realism that works very well.

Several elements most other games would consider side stories or minigames play an important role in Back to Nature. For example, raising a happy dog, horse, and chicken not only provide you with benefits in the fields, but also at local competitions. You can win the local horse race, dog show, or chicken sumo competition with your animal companion. Once your house has a kitchen installed, there are over 100 recipes to be made using a combination of the crops you harvest and the utensils ordered over the home shopping network. Entering one of your more complicated recipes will surely win you the cooking festival, something sure to attract the attention of the ladies. While most RPGs reward experience with statistic increases, Back to Nature rewards you tangibly, with additions to your house, barn, and stables, opening up greater possibilities for profit and character interaction.

Combat, menu driven or otherwise, is forsaken in favor of real-time manual labor. Repetitive tasks are the name of the game, and the fruits of your labor make even the daily routine a gratifying experience. There are no assailants to speak of besides perhaps the weather and the occasional wild dog, allowing you to focus on the day's work. Effective management of your time is crucial to success, and all planning and tool arrangements should be done indoors, where time is halted and you're allowed a breather. Working smarter instead of harder will reap greater benefits, so upgrading your tools and hiring the seven local harvest sprites' help becomes a necessity.

Visually, Back to Nature is attractive and colorful, if not overwhelmingly impressive. The crops and animals are easy to recognize, the character models are simple and reminiscent of Playmobil toys, and the comical anime-style portraits add a touch of humor to the lighthearted feel of the game. The festivals and their respective minigames are visually pleasing, and you'll be anticipating the next big event days in advance. Weather and the seasons are audibly well represented in Back to Nature, as are the animal responses to whistles, the harvest sprite theme music, and other nice touches. The background music becomes quite repetitive after a while, and the deadpan silence of night can get a bit boring, a problem that is compounded by the sound of your bouncy, squeaking footsteps.

While the farming mechanic, property accumulation, and character interactions are thoroughly enjoyable, Back to Nature does have some significant faults. The text scrolls in a painfully slow manner, achingly revealing the lines character by character, with your repetitive mashing of buttons doing little to speed up the process. The omission of a fast-text option is a glaring mistake, one that can make you reluctant to initiate dialogue with the more articulate characters, which can then lead to missing out on important announcements, recipes, and tips. In addition, load times are a bit slow, and a game save eats up a remarkable four blocks of space on your memory card.

Comparisons to the N64 version released earlier this year weigh in quite favorably for Back to Nature. The game has been significantly improved with the addition of several different crops on a much larger farm, an easier statistic and rucksack management system, more enjoyable festivals, the wonderfully deep cooking mechanic, the harvest sprites, and so much more. Singing and voices have been added in a few rare occasions, and while the overall sound is of a generally higher quality than the N64 version's, it remains lackluster.

While impatient players may want to avoid the considerable time investment required, those looking for a game with hours and hours of highly addictive, nonviolent gameplay should find a comfortable chair and a copy of Harvest Moon: Back to Nature. Be warned: You'll find yourself saying, "I'll play just one more day" more times than you can count. 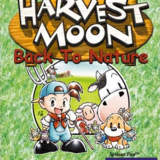 Harvest Moon: Back To Nature
Follow
$368.89 on Walmart
Buy 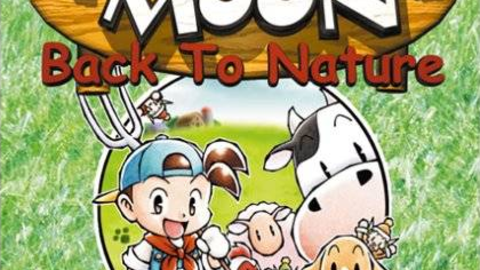 Harvest Moon: Back To Nature

8.8
Sign In to rate Harvest Moon: Back To Nature