While visually and aurally sound, and at times impressive, Harry Potter's GBA debut is neither innovative nor particularly compelling from a gameplay perspective.

The recently released Harry Potter and the Sorcerer's Stone games are based on the blockbuster movie, which in turn is based on J.K. Rowling's novel starring a young wizard. As the introduction cuts through its series of still images and background text, you will learn that Harry Potter is a child left orphaned in the care of cruel muggle (non-magical human) parents. Upon receiving an admissions letter, Harry leaves home with a friendly giant and makes his way to Hogwart's School of Witchcraft and Wizardry. While undergoing magical instruction, Harry will be challenged to compete in the Wizards' sport of Quidditch, and foil the plot of the evil wizard Voldemort. The enjoyable plot has been translated into an adventure game for the Game Boy Advance, where as Harry you will cross deadly chasms, collect pumpkin pasties and chocolate frogs, and knock many a pesky gnome unconscious.

Harry Potter for the GBA is definitely a good-looking game, featuring very well-animated sprites and environments that show off some truly impressive textures. As Harry explores the corridors of Hogwarts, you can notice his cape flapping nicely and marvel at the complex animation of his spellcasting gestures. Enemies, collectible items, and other vital elements are all highly detailed and are artistically pleasing in a colorful, storybook fashion. The developers have licensed audio tools from Factor 5, and the result is a strong collection of background themes to go along with the solid sound effects. Voice samples were used in a number of cases, and the effects are surprisingly well done.

Parents looking to purchase the Game Boy Advance version of Harry Potter and the Sorcerer's Stone for younger children should be warned that this is easily the most challenging version of Harry's journey available. In most respects it's a run-of-the-mill adventure game, but you are challenged to traverse a number of courses by triggering switches, activating platforms, and knocking gnomes unconscious. Harry can defend himself with his flipendo spell, but the well-animated casting animation imposes a nearly two-second delay before the projectile is actually fired. And the enemy AI seems to be erratic, though this may be attributed to the gnomes' mischievous nature. This version of the game also happens to be extremely unforgiving. For instance, falling off a platform will mean restarting an entire level, which forces you to repeat the same lever-activating routine over and over again. The worst thing about this is that the gaps you fall through seem like mere slivers of empty space that Harry could have easily jumped over, were he able to jump. Throughout the game you will learn new spells to liven up the action, but the five spells serve only to activate more platform elements or to light up dark passages. Each level is rather repetitive and consists of drudging through a maze, being extra careful not to fall into pits, while collecting a handful of some sort of item. Harry Potter for the GBA is unremarkable in this respect, and when compared to truly novel platforming adventures, it fails to distinguish itself in any notable way.

One of the more enjoyable and game-worthy aspects of the Harry Potter stories is the game of quidditch--a combination of soccer and basketball played by wizards on broomsticks. Harry's role in quidditch as seeker is to chase down an evasive little ball called the golden snitch as the game plays on around him. Chasing down the snitch earns your team a victory and in theory makes for an exciting, fast-paced diversion from the otherwise bland fare being provided. However, the top-down flying sequences are forgettable and not at all as exciting as they could have been. Catching the snitch involves tailing the ball for a period of time and then flying through hoops until you can get close enough to actually grab it. Completing this task fails to feel like a sport, however, and instead comes off as yet another chore.

Getting through the various mazes is quite a challenge, but for all the wrong reasons. All of the elements that make this game difficult are essentially game-design flaws. While visually and aurally sound, and at times impressive, Harry Potter's GBA debut is neither innovative nor particularly compelling from a gameplay perspective. This game would make a decent rental for fans who can't get enough of the bespectacled young mage, but with so many excellent options available, there is no reason for any but the most die-hard of Harry Potter fans to pick this one up. 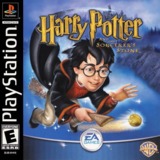