The Harry Potter franchise made a fairly passable jump to game consoles last year when EA released games based on the movie adaptation of the first novel in the series. The franchise's rich tale of a young boy's adventure as a wizard-in-training has all the gameplay and story elements needed for a video game pretty much built in. While the book that the film was based on has had a far-reaching appeal that's crossed age barriers, the games were definitely skewed toward younger players. Fortunately, the follow-up, Harry Potter and the Chamber of Secrets for the Xbox, manages to come far closer to capturing the franchise's appeal. Offering a polished mix of strong graphics and solid gameplay, Harry Potter and the Chamber of Secrets is a marked improvement over its predecessor.

Based on the recently released film of the same name, Harry's latest adventure traces his second year at Hogwart's School of Witchcraft and Wizardry. Harry's sophomore year at Hogwart's turns out to be both educational and hazardous when mysterious assaults on the student body start occurring, leaving many students paralyzed. To solve the mystery of the attacks, Harry must learn about a dark chapter in Hogwart's past and face off against an assortment of menacing foes. Although this is all a bit rough on Harry, it makes for a reasonably compelling game.

While the game offers a solid amount of gameplay variety, controlling Harry really isn't much of a problem, thanks to the game's accessible control scheme. You'll move Harry with the left analog stick and use the A button for a variety of context-sensitive actions. The B, X, and Y buttons can each have a spell assigned to them. Spellcasting has actually been given a twist to keep you on your toes when wielding Harry's magic. While you can simply cast a spell by pressing its assigned button, if you hold the button down and release it at the appropriate time, you'll be able to cast a "perfect" spell, which is usually far more powerful than a standard one. The select button calls up your remembral, which lists your tasks for that day and lets you examine your inventory of items. The left trigger centers the camera behind Harry and locks on to enemies, while the right analog stick switches you to a free-look mode. Although the game lacks a jump button, Harry automatically leaps when running toward a gap and will even catch ledges if possible. You'll also be able to shimmy against walls in stealth sequences, like in Metal Gear Solid 2, and fly a broom when needed.

Graphically the game looks very sharp on the Xbox. However, if you spend a bit of time with the game you'll find that the visuals could have been tightened up a bit. The environments, which re-create such familiar locales as Daigon Alley and Hogwart's, look great, as do the characters you'll meet. Detail in the game is high and showcases some intricate texture work, most notably on the various portraits that adorn the walls of Hogwart's. Lighting in the game is extremely well done, capturing the golden haze the school has in the film, complete with some nice stained-glass effects. Harry and the rest of the game's cast sport a stylized look that blends the cover-art style from the books with the actors who portray the characters in the film. The character models look quite good and animate fairly well, although you'll find some rather stiff-looking moves in the lineup. The special effects associated with the various spells are appropriately magical in appearance, making liberal use of particle effects and lighting. Because of the Xbox's graphical muscle, the game's frame rate remains high, even when the action onscreen is hectic and spell-filled.

The game's audio is equally impressive, thanks to Dolby support in the game, which enhances the game's already good audio package. The voice acting is strong, and the musical score is effective at maintaining the tone of the game. The various sound effects used in the game do a great job of selling you on your locations in the game as well.

In the end, Harry Potter and the Chamber of Secrets is a marked improvement over the last Harry Potter game--it has a stronger game design and a lot more polish. The game's impressive visuals on the Xbox coupled with its rich gameplay definitely make it one of the better platform games on the system. Xbox owners looking for a solid platform experience will want to check out the game. 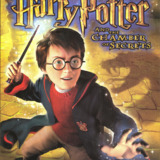