Harlem Globetrotters: World Tour is a sloppy two-on-two basketball game that includes Globetrotters players but none of their signature shots or antics.

Whether you're a fan of the Harlem Globetrotters or just looking for a basketball game to play on your Game Boy Advance, you're bound to be disappointed by Harlem Globetrotters: World Tour. This pathetic NBA Jam rip-off contains none of the Globetrotters' trademark shtick, and, worse than that, it serves up a flimsy rendition of basketball that's as broken as it is dull.

Long before the And 1 Streetballers, there were the Harlem Globetrotters. Since 1927, different incarnations of the Globetrotters have been thrilling audiences worldwide with their tongue-in-cheek brand of acrobatic basketball. If you've ever watched a streetballer dribble through an opponent's legs, bounce the ball off an opponent's chest, juggle multiple basketballs, or perform a somersaulting dunk, then you have some idea of what you'd see at a Globetrotters exhibition, because they were the first ones to do all those tricks. It's ironic, then, not to mention sad, that Harlem Globetrotters: World Tour neglects to incorporate any of the team's signature antics, aside from some high-flying dunks that look suspiciously like they were copied from Midway's NBA Jam games.

In fact, the whole game feels like a gimped knockoff of NBA Jam. Play is two-on-two, quarters last two minutes, and players take different canned shots depending on where they're standing when you push the shot button. Press it from the top of the key, for example, and you'll do a Michael Jordan-style hang-time dunk. That's nice and all, but there are only a handful of unique shots in the game, and the animations range from choppy to nonexistent. Half the time, the ball will disappear from your player's hand and appear in the basket. Passing animations are similarly jumpy, to the extent that you or the CPU can dish the ball down the court without actually seeing the receiving player grab the ball. The ref won't call you for fouls, so it's OK to mash the steal button with abandon. Unfortunately, doing so doesn't conjure up any antics worthy of the Globetrotters name. Just tap the button a couple of times and you'll end up with the ball. As if that weren't boring enough, the CPU rarely bothers to pass or steal, which means you'll be up by at least 10 points by the end of the first quarter.

It's shameful to see just how little care went into putting the game together. There are only two play modes, world tour and quick play, and progress is tracked with passwords instead of by an automatic cartridge backup. The gameplay isn't simply dull; it's also broken. Frequently, when you press the shoot or pass buttons, the ball will sail toward the wrong basket or an empty corner of the court. As for the CPU, it attempts full-court shots after every other rebound and will completely ignore you if you stand on the lower edge of the court and let the clock run out. The game doesn't support link play, so you have no recourse against the brain-dead CPU.

You won't find much solace in the presentation, either. The player graphics are large and the courts look stunning, but the animation is so choppy and bizarre that it's impossible to follow what's going on. Jump shots and layups seem to teleport, dunks go in after the fact, and shot takers somehow materialize under the hoop to catch their own three-point attempts. Audio consists of a few generic sports anthems, some chirpy sneakers, and short recorded clips of children cheering. When you're not taking shots, all you'll hear is silence broken up by the intermittent chirp of those squeaky shoes. Incredibly, the Globetrotters' own theme music, "Sweet Georgia Brown," is nowhere to be heard!

Hardly any effort was made to incorporate the Globetrotters license into the game. There aren't any wacky plays or halftime sideshows. You'll never see a Globetrotters player hurl a bucket of confetti at the crowd. The titular team does include 26 actual players from the past few years, which is nice, but the roster doesn't include legends like Meadowlark Lemon, Fred "Curly" Neal, or "Sweet" Lou Dunbar. Those guys appeared in the 1970's cartoon series and in multiple Scooby-Doo! episodes! It's also disappointing that all of the 15 other opposing teams are fake squads populated by fictional players. They didn't even bother to include the Globetrotters' current or classic rivals, the New York Nationals or the Washington Generals. Harlem Globetrotters: World Tour for the Game Boy Advance is a complete letdown in every way. It's a crummy basketball game and an insult to the Globetrotters' legacy. 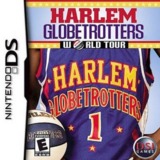 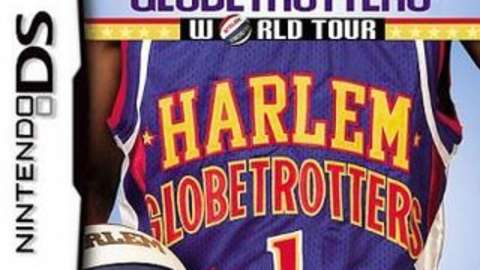 This DS game lets you play with the Harlem Globetrotters, a basketball team known for bringing fancy, entertaining moves to the court.