If you really enjoy pinball, you won't regret adding Hardcore Pinball to your collection.

You won't find any hidden tables, unlockable artwork, or minigames in Hardcore Pinball. There are four different tables to play on, and that's it. What you will notice as you're playing, however, is that Hardcore Pinball actually feels like real tabletop pinball.

The game's physical dynamics set it apart from other pinball video games. The ball rolls along the lanes and careens off metal fixtures with the same kind of heavy bounce you'd see on an actual table. When the ball comes in contact with bumpers and springs, it gets knocked around rather violently. If the ball ricochets off a corner, it angles downward like it should. Simply put, Hardcore Pinball doesn't feel artificial.

As for the table designs, they're fairly clever. The initial table is pretty routine and set up primarily to help you get comfortable with the play mechanics, but the other three are all patterned after some sort of outrageous theme that is reflected by the gameplay. The soccer table has a launcher for corner kicks, the retro table becomes black and white after a while, and the robot table has all sorts of capture areas to represent the various pieces of an actual robot. The tables all have a good variety of flippers, bumpers, and targets that keep the ball moving and ensure that you don't develop the desire to take your eyes off the screen.

At first glance, you won't appreciate the game's overall presentation. The menus are pathetic, and the tables themselves are woefully generic, except for the soccer table, which is a work of genius. You'll grow into the game, however. All the bumpers, lights, and gadgets on each table light up and jostle exactly as they would on a real pinball table. The sound effects are a delightful mix of bells, bangs, whistles, and speech snippets that fit the game nicely, even if they're not authentic. Over time, you'll notice that the vocal portions of the music that accompanies each stage lack the distortion that's often prevalent in games that have complex soundtracks. The music won't blow you away, but it's better than a lot of what you've heard in other GBA games.

All that Hardcore Pinball is missing is some sort of gimmick to extend its replay value. It's easily the best pinball game available for the Game Boy Advance, but certainly a career mode or table-morphing options aren't out of the question for a game of this type. Otherwise, it does an exceptional job of bringing tabletop pinball onto a handheld video game system. If you really enjoy pinball, you won't regret adding Hardcore Pinball to your collection. 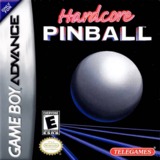