Quarantine does wrap up the storyline, but those who couldn't bring themselves to stick with the .hack series really won't be missing out on much.

To make a successful anime franchise these days, merchandising and diversification is the key. Look no further than the tremendous success of Pokémon, and the episodic TV shows, movies, and games based on the concept, for the perfect example of this. Early last year, Bandai attempted something similarly large-scale with .hack ("dot hack"), which was simultaneously developed for television-viewing audiences, comic book fans, and gamers. This new franchise featured an innovative concept--the action takes place inside a futuristic massively multiplayer online role-playing game, kind of like EverQuest. Character design work from Evangelion's Yoshiyuki Sadamoto and a storyline by Ghost in the Shell's Kazunori Ito further solidified .hack as something deserving of an anime fan's attention.

However, the concept turned out to be a lot better than the episodic game releases. The first game, Infection, was fairly good, but the second was overly similar to the first, and indeed, so was the third. Why not just make one great game rather than four diluted ones? The answer is, presumably, to make more money. At any rate, the fourth and supposedly final game in this series, dubbed Quarantine, is predictably similar to its predecessors, meaning it's virtually identical in gameplay terms and has all the same shortcomings and recycles all the same graphics and sound as its predecessors. The action of this series wore thin even by the end of the first game, so only hardcore fans are going to bother slogging through the same highly repetitive gameplay (let alone paying for it) for the fourth time. For what it's worth, Quarantine does wrap up the storyline, but those who couldn't bring themselves to stick with the series really won't be missing out on much.

In many ways, Quarantine is the most frustrating game in the series. For one thing, you'll once again be playing more or less the same highly repetitive game. This means, from a third-person perspective, you'll be controlling our hero Kite, who'll run around randomly generated fields and dungeons filled with monsters with up to two of his friends in tow. Only now, the monsters hit you harder and take more hits to kill, and the bland, repetitive dungeons are sometimes even longer. Furthermore, the story-specific areas you'll need to go to will often require a large number of "virus cores," which are basically the keys you get either from specific events, occasionally from dungeons, or mostly as a random bonus for using Kite's "data drain" move on a weakened foe.

Let's be honest: No one's interested in Quarantine for the gameplay, because if that were the case, they could just continue to play one of the other three games in the series. As such, the fact that there's a good chance you'll be stuck with a lengthy key hunt before each of the story-specific sequences can make Quarantine pretty maddening at times. Some players will undoubtedly want to rush through the game just to see the cutscenes, but, almost mockingly, it won't let them. Though all the games in this series are pretty much the same, this one probably has the worst pacing of them all.

Another part of the reason the pacing is so bad is that, by now, the supposedly real-time combat forces you to spend not just much of your time, but sometimes most of your time, accessing and flipping through menus while the action is at a standstill. The tough foes you'll face in this chapter will routinely cast debilitating or extremely damaging spells on your characters, forcing you to immediately use recovery items or order your allies to heal you, or else you'll die and have to reload your last saved game. Sure, there are some new foes, including some new bosses, this time around, but the basic combat strategy of this series has long since worn thin.

However, as mentioned, the story does get tidied up, and it takes a few twists that are relatively dramatic for this series. Kite and his friends already know what they're up against--a malignant force in their game threatens to disrupt all of society as they know it, and it's already knocked some of their friends into a coma. Now, the players and even the administrators of the game known as The World must join forces to put a stop to the corruption that's rapidly spreading and hopefully undo what's already been done. At least in terms of quantity, there are more story sequences in Quarantine than in the previous game, and there's more action in those sequences, too. Still, these aren't anything that would particularly impress or interest anyone who isn't already enthralled by the series.

Sure enough, Quarantine looks and sounds pretty much identical to its predecessors, though these elements have held up pretty well over the past year. Like the other games, Quarantine also ships with an anime DVD, as if to soften the blow of having to pay for yet another one of these games. On its own merits, Quarantine isn't a bad game, and those loyal to this series should find it to have a satisfying conclusion that, sure enough, leaves the possibility for further adventures in The World. However, Bandai's decision to pad one good game's worth of content with about 60 to 80 hours' worth of filler, and to split that game into four full-priced products spread out over a year, remains disappointing. 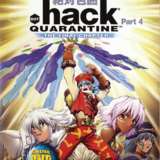