Aside from the unusual premise, it's an average action RPG, reminiscent of but definitely not as good as last year's Kingdom Hearts.

It's difficult to write about .hack, not only because the game has such an unusual concept--it's a role-playing game that takes place in another role-playing game--but also because that damn title breaks up your sentences something awful. So we're just going to refer to it as "the game" from here on out. Published and produced by Bandai, possibly the world's most recognizable name in Japanese animation and the company whose properties include everything from Hello Kitty to Mobile Suit Gundam, the game features character designs by Yoshiyuki Sadamoto (Evangelion) and a story line by Kazunori Ito (Patlabor). For good measure, the game comes bundled with an anime DVD that Bandai created as a tie-in. There's even an animated series based on this material that's currently airing on television, and the game itself is only the first of many--so Bandai is definitely making a big push with this one. It's unfortunate, then, that the game itself doesn't quite live up to its clever concept or its potential. It's a simple, repetitive experience that's over fairly quickly for an RPG, and its story doesn't go anywhere at all. Nevertheless, it's pretty fun while it lasts, and anime fans probably won't be able to resist it.

The game actually takes place in the near future, when seemingly everyone is addicted to a massively multiplayer online role-playing game called The World. The World, as it turns out, is highly reminiscent of 1998's EverQuest. It's a swords-and-sorcery game, filled with character classes like wavemasters, twin blades, and heavy axemen. "Player characters" can be seen running about towns, trading items with each other, and often speaking out of character and with plenty of emoticons. They all seem to be having a good time. But something is amiss in The World: Rumors abound that some people are falling into comas while playing. As someone with a friend who met such a fate, you--whose "in-game" character is an upbeat and spiky-haired twin blade named Kite--set out to discover what happened. You'll spend the vast majority of your time with the game actually playing The World, though you'll sometimes quit out to check your e-mail and scour The World's message boards for clues.

That probably sounds really strange, and it is. But once you get past the whole metagaming thing, you're left playing an average action RPG, reminiscent of but definitely not as good as last year's Kingdom Hearts. You'll always control Kite directly, though he can travel with up to two companions at a time, and you'll meet many characters who'll be willing to join you later on. The game is easy to play. You view the action from a third-person perspective, and you use the left analog stick to move your character around, the right stick to control the camera, and the R1 button to quickly reset the camera at your back. Should an enemy move offscreen in the middle of a battle, a convenient indicator along the edge of the screen will point you toward it, and there's always a minimap to keep you from getting lost.

The gameplay itself essentially boils down to traveling to a series of randomly generated battlefields, each of which features a randomly generated dungeon that is filled with monsters and treasure chests. Though there are a number of different "skins" for the battlefields and dungeons, and though the makeup of these areas is always somewhat different, they all become effectively identical after a while. Even the plot-critical areas of the game feel like they were randomly slapped together--because they were. In between slogging through battlefields and dungeons, you return to town to buy or trade for new equipment, especially healing items. There are only two towns in the game, adding to the sense that the game is really threadbare.

The combat is mostly just a hack-and-slash affair requiring little skill or strategy, though it's fast-paced and it looks good. You give your party members simple orders, such as to use their battle abilities or their healing skills, and you can engage enemies yourself using normal and special attacks, as well as some spells. The battles appear to take place in real time, but they don't. The game automatically pauses whenever you bring up a menu for using healing items and special abilities, and you'll rely on both of these things more and more the longer you play, so toward the end of the game you'll be looking at menu screens nearly as often as you'll be looking at an actual battle playing out. The combat usually isn't very difficult, though the occasional enemy will use crippling special abilities on you and your party, causing your characters to become paralyzed, to fall asleep, or to attack each other. Unlike in a real MMORPG, it's game over and back to the title screen here if all your characters "die," but once you learn to deal with these peskier foes, you'll have little problem cutting your way through any and all monsters.

The game itself is completely linear, just like most console RPGs, though it's structured in such a way that you can spend as much time as you want going to random battlefields (whose terrain and difficulty you can customize using the game's area password system) in between going to the ones that are key to the plot. Actually, one of the most disappointing aspects of the game is that the plot itself is cut short before anything of interest happens or before anything is resolved. It's fine that Bandai intends for this to be the first in a series of games, but it's not fine that the developers created an initial chapter that offers no real sense of development. Mysterious characters are introduced, some intriguing events take place...and that's it. You don't really learn anything about anyone, and you don't really come any closer to getting to the bottom of the supposed conspiracy. Plus, a number of the other player characters who join you are completely irrelevant to the proceedings.

Vibrant graphics at least make the game enjoyable to look at. The battlefields use a nice soft-focus effect for background scenery, and there are a number of different environments, from lava-soaked wastelands to verdant forests. And you'll likely get a kick out of the virus-infected areas you'll come across, where chunks of the environment are ripped out to reveal programming code within, like something out of The Matrix. It's too bad that a lot of the textures are so blurry up close. The character models aren't very detailed, either. But the character designs are good, so you'll probably grow to like Kite's quirky companions, though again, it's a shame that interactions with them are so limited. At any rate, the game succeeds at having a distinctive look and style to it, one that will particularly appeal to younger players despite the game's roots in the sort of stuff--computer hacking and MMORPGs--you'd sooner expect to see older gamers interested in.

The game sounds good, too, despite the uneven quality of the music. Certain types of battlefields are paired with an endlessly looping track that's obnoxiously loud and way too comical, but other areas have themes that fit the game really well. Either way, the exploration music seamlessly transitions into combat music when you run into a pack of enemies. The sounds of battle are well done, and the voice acting is on par with what you'd expect to hear from dubbed anime these days--the voices suit the characters fine, and most everyone sounds really enthusiastic. Bandai also thankfully left in the original Japanese speech as an option. The game reserves audible speech mostly for use in cinematic cutscenes, and probably could have used it more extensively.

You can finish the game in 20 hours or less, though you can continue playing after that, unlocking some secrets and finding better equipment. Subsequent installments in the series will optionally allow you to export your character data, continuing on from where you left off. And hopefully future installments won't merely offer more of the same random hack-and-slash gameplay along with another 15-20 hours' worth of story that doesn't go anywhere. It's not that the first game in the series isn't any good--it's just that the concept is much better. 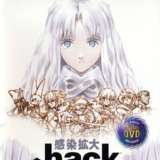