Gunstar Heroes became a definitive run-and-gun action game when it was first released in 1993, and its quirky personality and nonstop intensity still shine through.

By 1993, the Sega Genesis had long since grown into maturity, and many fans of Sega's 16-bit console started to think they'd seen it all. Then came Gunstar Heroes, from a previously unheard-of Japanese developer called Treasure, and it became one of the best run-and-gun action games available for a system that had already seen dozens of such games. Gunstar Heroes draws its influence from great arcade hits like Contra, Strider, and Street Fighter II but features its own distinct style, manic action for one or two players, and various innovative touches that make this still one of the best games of its kind. A cult classic if ever there was one, Gunstar Heroes isn't one of the most recognizable names from the Genesis era despite being one of the better games for the system, so it's fortunate you can now experience it in a pixel-perfect emulation as part of the Wii Virtual Console service.

Like any action game of the era, Gunstar Heroes doesn't spend a lot of time with exposition. However, unlike other games, it has a strongly pronounced visual style and setting, right on down to the determined look in your character's manga-styled eyes. The comical visual style of the game is similar to that of the later Metal Slug series, and like those games, Gunstar Heroes combines some very intense shooting action and over-the-top boss battles with refreshing moments of comic relief. The gameplay itself will constantly have you on edge, though, because this isn't simply your average side-scrolling shoot-'em-up. Stages will take you in every direction and will constantly throw you from one encounter into another, sometimes challenging you to take on multiple tough boss enemies in close sequence. This was one of Gunstar Heroes' innovations; it doesn't save bosses just for the end or middle of the level but instead subverts a lot of level design conventions in a remarkable way. You get to choose from one of four starting stages, each of them quite tough even at the easy difficulty setting. Thankfully, though, you can continue if you run out of health, and the stages are brief and exciting enough to justify many replay attempts.

You can approach levels using completely different tactics, too. One of the great things about Gunstar Heroes is that you can play it with a friend, and interestingly enough, the two playable characters are quite different: One of them shoots in different directions while running, as in Contra, and the other shoots while standing still, letting you aim precisely in eight directions. They have different jumping attacks, too, and they can even execute slide tackles and throw attacks. Another great thing about Gunstar Heroes is the weapon upgrade system. You can choose from several starting weapons, including a rapid-fire machine gun, a laser, a flamethrower, and a homing shot. But you can also mix and match the properties of any of these, resulting in cool combinations like exploding fireballs. Many of the weapon combos feel very powerful, yet you'll always be fighting lots of enemies or very big ones, so it all balances out.

The charming visual style and the raw challenge of Gunstar Heroes make for a winning combination. Even if you never played this game in its heyday, chances are you'll still be able to appreciate it as one of the most imaginative, well-put-together examples of a classic style of game. For your 800 Wii points ($8), it's one of the best purchases you can get from the Virtual Console. 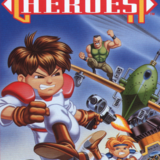