Spying, puzzles, and acrobatic feats make Gunpoint a delight to play, but the overall experience is unfortunately short.

The life of a freelance spy is tough, but it's not all bad. Sure, your life may be in constant danger when clients with deep pockets and secret motives are calling the shots, but if you're spy-for-hire extraordinaire Richard Conway, you take it all in stride. You handle it so well because you know that you've got one thing the other team doesn't: self-propelled hypertrousers. Well, that and a handful of other gadgets that give you a considerable edge over those who wish to do you harm. The pixelated, trench-coat-sporting detective Conway has Humphrey Bogart's sense of style and the versatility of Inspector Gadget, but the star of Gunpoint ultimately stands in a league all his own. Spend five minutes leaping from tall buildings, thwarting security forces, and hacking into electrical systems, and you begin to understand what makes Gunpoint such a delightful experience, albeit too brief.

Your introduction to Conway is an unusual one. After flying in from offscreen, he crashes through the glass ceiling of the lobby in the Rooke Firearms building, landing shaken but unharmed. While on his back, he receives a call from Selena Delgado, a Rooke employee, checking to be sure he's OK. Plus, she's got an assignment, but before you reach her office, tragedy befalls your would-be employer. A man not unlike Conway emerges from an elevator and kills Selena before fleeing into the night. Then, a call arrives from Melanie Rooke, CEO of Rooke Firearms. She offers to protect your innocence, and wants to see the real murderer face justice. The complex plan requires Conway's unique repertoire of skills, and though he's certainly fit for the job, negotiating the most complex variable of all--people--proves to be just as difficult as breaking into a secure weapons facility.

From here, Conway faces a string of contracts that put his abilities and wits to the test. Some of the mechanics in Gunpoint might not seem fitting for a gumshoe with noir sensibilities, but they make for a great game. You spend a lot of time doing spy stuff: sneaking into buildings, obtaining or erasing sensitive data, and thwarting dim-witted guards. Luckily, you've got a few tricks up your sleeve. Conway can leap incredible distances thanks to his explosive hypertrousers, and subsequently latch onto any architectural surface in his flight path. Conway’s leap controls like a slingshot: drag the mouse while holding the left mouse button, and let go for takeoff. Once you've taken hold of a wall or ceiling, you can direct Conway any direction you wish: up walls, across ceilings, and even around structural obtrusions. Controlling his superhuman physicality makes for the best moments in Gunpoint, but his extreme mobility is far from the only good content on display.

Though he can reach places most can't, Conway still has to overcome a bevy of human and technological obstacles. After the first few missions, he eventually acquires a pistol and, more importantly, the powerful crosslink device. With it, you get a visual representation of the various electrical systems in a given building, but more than that, you have the ability to reconfigure their circuits. You can, for example, trigger a security camera to open a door rather than sound an alarm, or make a light switch send a power surge to any outlet, knocking a passing guard unconscious. With roughly a dozen types of devices to chain together, these puzzles are a bit of an elaborate puzzle sandbox. Getting to your objective can involve complex configurations with very specific timing, but there are often multiple solutions.

Eventually, you have to tackle buildings with various types of networks under one roof. This requires you to reach a specific room to tap into a gateway of sorts. Conway has total remote control over basic systems when he first obtains the crosslink, so the added complexity of numerous networks brings just the right amount of challenge to the table. Guards too become increasingly more formidable. At first, you only run into pushovers who can't see in the dark--unlike the black-tie-wearing "professionals"--and are easily tackled into submission. There are also enforcers, which are armored guards who can't be knocked over, leaving you to opt for stealth or to reach for your trusty pistol. The problem is, your gun makes a fair amount of noise. Unless you can complete the mission and escape before a 30-second timer reaches zero, a sniper appears and blocks your exit. There are means to take out or avoid the sniper, but he's generally adept at taking you out the moment Conway comes into view. This threat often dissuades you from resorting to gunplay and emphasizes the importance of stealth and hacking without forcing your hand.

What follows the intro level is a story of deceit, corruption, and corporate espionage, where you play both pawn and executioner. Dialogue trees with a fairly interesting cast can lead to various outcomes, and with the game clocking in at around two hours, it's quite enjoyable to take multiple trips through Gunpoint, to a point.

As much fun as it is to see the story deviate in different ways, it doesn't have the same draw as the gameplay, but unfortunately , Gunpoint's limited number of missions leave you wanting more. The built-in level creation tools should enable you to add to the game, but they're missing a few key features. To be fair, custom levels are easy to create thanks to the straightforward interface, but there's almost no point to playing the levels you've designed, because you already know the solution. Sadly, there isn't an easier method to share custom levels beyond manually distributing files via e-mail, and you're limited to level, rather than scenario, design. It's a welcome addition that should have added to the experience, but it isn't robust enough to get the job done.

When the curtain closes on Conway's tale, you'll find yourself jumping back in for more. The detailed modern setting and the absurdly powerful neo-noir private eye Conway are easy to appreciate, and the complex arrangement of circuits will inspire you to play inventor, linking networks, elevators, and even your enemies’ guns to control the situation at hand. However, even with the ability to choose new tactics and alter the flow of the game's plot, you'll wind up walking away from Gunpoint sooner than you'd like. It's the start of something great, but without more content, it feels too much like the appetizer to a main course: tasty enough to excite the senses, but not substantial enough to constitute an entire meal. 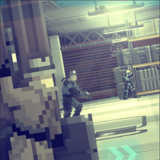 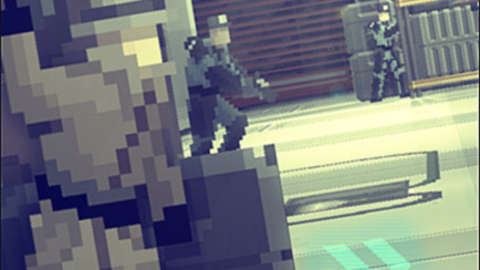 Gunpoint is a stealth puzzle game that lets you rewire its levels to trick people.