For fans of the original manga, this is a must-buy.

In what has got to be one of the most shocking developments of the year, Banpresto has not only taken a famous manga license and turned it into a game, but it's taken the license and made a great game. Created by Yukito Kishiro, GUNNM-Martian Memory may not sound familiar to many people, but its American name, Battle Angel Alita, will.

Following the story of Alita, who was found as a disembodied cyborg head in the Scrapyards by Tipharean scientist Ido Daisuke, the game is structured like a semilinear action RPG. From a third-person perspective, you control Alita, as she (and her superpowered cybernetic "berserker body") travels throughout the Scrapyards and beyond in an amazingly long quest that will have you playing about as long as you'd play Legend of Zelda: Ocarina of Time. Not too shabby. Along the way you'll meet all the characters that flesh out the original manga: Jashugan, Ed, Shumira, Umba, Murdock, Zapan, and Desty Nova; they're all in there. In fact, later in the game you get to play as Alita's paramour, Figure Four.

The game is realized in fully 3D environments in fixed-camera positions, kind of like Brave Fencer Musashi. That's not a problem though, because the camera angles are quite intelligent and user friendly. There are very few moments where the camera angle will even bother you. At first you will be limited to exploring the Scrapyards and a few provinces where your skills as a bounty hunter can be appraised. Yes, bounty hunting. That's how you make your money in Battle Angel Alita. Using your quick skills, your berserker body, and your "panzer kunst," you dispatch foes with price tags on their heads so you can cash in your kills for credits and upgrade your body at various bounty centers.

Since most of the action consists of either exploration or combat, it's good that Banpresto has developed an extremely efficient fighting engine. You can simply avoid enemies by running past them, or, if you choose to fight, you simply press the select button, and you will enter battle mode. Basically Alita has two attack buttons and a block button. She also has a jump button that comes in handy during fights. A punch button will execute a string of multihit combos, while the kick button will do approximately the same thing. Hold down the R1 button while pressing punch or kick, and Alita will attack with greater power. Response time is excellent, and the jump button is especially important when fighting multiple enemies. Because of the 3D nature of the game, keeping locked on to your enemy could have been a nightmare, especially when you're fighting two or more enemies. Fortunately the game keeps you squared away with your closest opponent until one of you goes down. When someone else enters your private space, the focus switches to that attacker next. Occasionally you will lock on to someone farther away from you, but this rarely becomes a problem, since you can back-flip out of the way. Which brings us back to the jumping. Should an enemy resort to firing long-range attacks at you, while another attempts to smack you around, you can roll forward, back-flip, or side-flip out of the way, all very quickly and much more swiftly than Lara Croft. When you dodge a bullet in GUNNM, you really feel like you pulled off a cagey move. The block button is also important and not just some gratuitous inclusion. To defeat some enemies, you are actually required to use the block button. Acting as a counterattack of sorts, by blocking your enemy's attack at the right moment, the screen goes black, and your foe will be stunned long enough for you to initiate a super combo that does incredible damage. The faster the enemy, the harder it is to block, so timing is important. Essentially, the fighting engine is simple but well-thought-out and superbly executed. Killing the bad guys never gets tiring, and the enemies change as the story progresses so you won't get bored quickly.

Fans of the series will recognize the environments, as they have been re-created as faithfully as possible. The NPCs don't really do anything except stand around and wait for you to talk to them. Boss encounters are, naturally, more challenging, and bringing the big guys down is always satisfying and necessary to further the plot. During your travels you'll encounter some interesting minigames and the occasional "special" boss encounter. As anyone familiar with the series knows, motorball plays a crucial role in the storyline. Motorball sessions set up pivotal encounters with Alita's arch rival Jashugan, the reigning motorball champion. During motorball sequences you move Alita around a race track, viewed from a three-quarter perspective, and attempt to knock out the combatants while trying to make it to the finish line intact. In more advanced matches, Motorball bosses will await you at the end of the track. Also breaking up any potential monotony is the occasional mandatory battle with certain bosses, which will have you trying to blow up command centers, replete with their own separate battle engines, and driving a mono-cycle through the desert, while waiting for a remote satellite to charge up your jumbo-sized gun via laser. The variety of things to do here, while not as ambitious as say Final Fantasy VII, is still welcome and always seems natural, not gratuitous.

Banpresto and company have also seen fit to exclude anything that would annoy gamers, like falling off a cliff, cheap deaths, or difficulty in leveling up. They have also sought to include things like visible upgrades in weaponry (which can be long distance, like guns and smart missiles) and costume changes. Saving is also convenient and can be done at any time at any number of save locations.

Graphically the game is extremely competent, and it's obvious a lot of work went into making the environments believable. While the textures can be grainy and there's no light sourcing, you can forgive them for that since everything is very solid. Occasionally there will be glitches, seaming, and polygon warping, but it's the hardware's fault this time. Additionally, all of the game's cutscenes are rendered in real time, using the game engine, and maintain consistency in the game.

The main disappointment in GUNNM is the music (or lack thereof) and the sounds (or lack thereof). While the music is reminiscent of FFVII in some towns and whatnot, and there's the occasional smattering of drum 'n' bass, there's absolutely no voice acting (unless you count Alita's screams in battle "voice acting"), and during certain areas of the game, there's no sound except footsteps. It adds a desolate feel that's not appropriate to the game. In fact, the silence can sometimes get annoying, and you'll wish for any noise to appear. Sound effects, on the other hand, are fine and do the job well.

To conclude, for fans of the original manga, this is a must-buy. Rarely do you ever see a game, licensed or not, come as complete as this. For fans of action games with RPG flavors, this is a must-buy, whether you know the character or not. And if you don't know Alita, this is a good place to start. As it stands, it probably won't be picked up in the US, and knowing that, GUNNM Martian Memory emerges as one of the best imports in awhile. 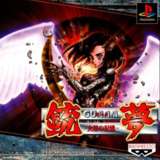 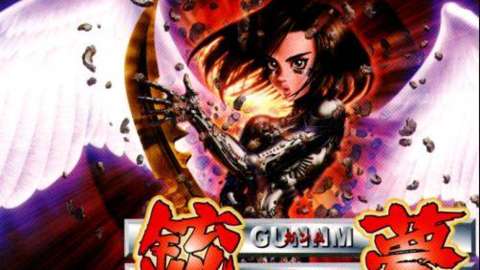 For fans of the original manga, this is a must-buy.