Gundam Battle Assault isn't a good enough game to live on its own - the fighting is competent, but hardly compelling for any length of time, and the story mode is completely uninteresting.

For those not already in the know, Gundam is a long-running Japanese anime series that has gone through many transformations over the years, telling the tale of a continuous interplanetary conflict involving warriors who pilot giant robots. With the exception of the lukewarm Gundam Side Story: Rise From the Ashes, which was released for the Dreamcast earlier this year, most of the Gundam games have remained in Japan. Gundam Battle Assault is a 2D fighting game featuring Gundam robots. The game originally came out in 1998 under the title Gundam: The Battle Master 2 in Japan, and now Bandai has decided to bring the game to the States.

In the game's single-player mode, you play as Heero Yuy, and your mission is to destroy the remaining giant robots, or Mobile Suits. This sets up a frail storyline that manifests itself in between-fight text exchanges between the combatants. Aside from the single-player mode, there is also a two-player versus mode. In both modes, you can choose from several different Mobile Suits, including the Wing Gundam, the Zaku II, the ZZ Gundam, and the Z Gundam. Each Mobile Suit has various normal punch and kick attacks, as well as special moves. Some special moves - rifle firing, for instance - are limited by the amount of ammo you have. You also have one super attack - always executed with a double fireball motion - that can be executed three times per bout. Also, you have thrusters that can be used to jet around the screen, and you can dodge attacks by ducking into the background for a second. A beam shield can also be employed to protect you from projectile attacks. Each mech has three life bars, and the fight doesn't stop until one of the mechs has all three bars depleted, which means the fights usually last a while.

For a game originally released in 1998, Gundam Battle Assault still has an interesting look to it. The robots are positively huge. Some of the larger bots are as tall as the screen. The camera moves in and out as the Mobile Suits get closer to and further from each other, always keeping tabs on the action. The only real problem is that the mechs look really, really blocky. As a trade-off, the combatants move pretty fluidly. The sound effects and music are fairly standard, though the dramatic "end of fight" effect and some of the explosions sound pretty good.

Gundam Battle Assault isn't a good enough game to live on its own - the fighting is competent, but hardly compelling for any length of time, and the story mode is completely uninteresting. This is one of the few instances where applying FMV would have actually helped the game, especially when you consider the large amount of Gundam footage that Bandai could have chosen from. If you're a Gundam fan, well, this review doesn't matter - you've probably already preordered the game. But if you're just looking for a good fighter, Gundam Battle Assault doesn't fit the bill. 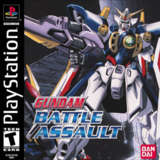