It's precisely the sort of game that you'd want to rent for a few days and move on to something else.

We, as a society, love the concept of a jet that can transform into a robot and back again. The thought of it has been locked in the subconscious mind of most 20-somethings since the very first time they saw Robotech, the Transformers, or any number of other imported Japanese television shows. It's just a great idea, combining the speed and mobility of a jet with the ground maneuverability of a giant robot. As a result, it's easy to be drawn to games like Gun Metal, which features--yes, that's right--a fast-moving jet that can turn into a heavily armed robot at will. But the game's somewhat sticky control and straightlaced mission design keep Gun Metal's gameplay from living up to the strength of the idea.

Majesco's game puts you in the driver's seat of the Havoc Suit, a prototype vehicle that, in case we haven't mentioned, is a jet that turns into a 30-foot robot. Your mission is one of defense, as your planet--inhabited by escapees from a war-torn Earth--is blindsided by a huge earthling fighting force. As such, you'll spend about the first half of the game on protect-and-escort missions, similar in design to the ones found in your typical flight combat game. But after taking care of your defensive operations, you'll finally be given a chance to go on the offensive, attacking enemy bases and so on. The missions are more or less a trial-and-error process. The enemies attack in the same formations each time you play, so if you find yourself getting flanked and wiped out the first time through, only small adjustments are required to come out on top the next time. As a result, only the last couple of missions, which turn up the heat a bit, are truly exciting.

The control in Gun Metal gives you a lot of options, but no one configuration seems to deliver the level of control you'd expect from either a jet or a giant robot. The jet mode is meant to be highly maneuverable, but it could stand to turn just a bit tighter, even when you're moving very slowly. The robot, meanwhile, plods around at a very slow rate, so you'll find yourself transforming to jet, boosting up to where you need to be, and changing back into robot form to deal with ground-based foes. A land-based dash would have been welcomed. Also, the game defaults to a weird auto-aim scheme in robot mode that doesn't lock on soon enough to be terribly useful--luckily, this can be turned off with the push of a button, giving you full control of aiming your weapons.

Speaking of weapons, you'll start out with only a couple of weapon options in both modes, but as you play, you'll earn lots of new weapons to choose from. Each form of the Havoc Suit has only a few slots to fill, so once you've earned more weapons than you know what to do with, you'll have to choose wisely. Each weapon is suited for different types of operations. You'll get a disc blaster that will let you ricochet shots off of walls, land torpedoes for attacking distant ground targets, dumbfire bombs that let you carpet bomb an area, and many, many more.

Graphically, Gun Metal is competent, but rarely stands out, which is fairly surprising given Rage Software's past games, like Incoming, which were notable for their visual presentations. Gun Metal runs at a solid frame rate and has reasonably decent textures and effects, but no one aspect of the visuals is particularly impressive. Likewise for the game's sound. The music can be replaced by custom soundtracks, if you so desire.

Overall, Gun Metal is a middle-of-the-road game that makes only a few mistakes, but doesn't exactly reach for the stars, either. It's precisely the sort of game that you'd want to rent for a few days and move on to something else. 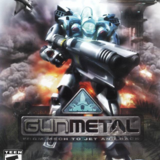 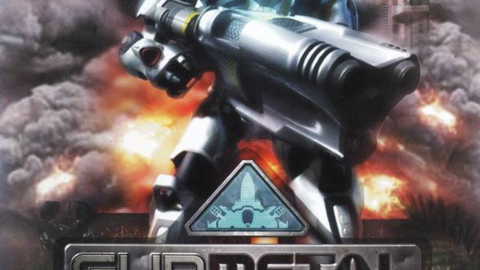 Gun Metal is a fast-paced, arcade-style action game in which you pilot a mech that can transform into a jet.