That's one giant leap for a franchise; one small step for a genre.

As soon as Rock Band let you play guitar, bass, drums, and sing to your favorite music, it was clear the bar had been raised in the music-game genre. It wasn't long before Activision announced that the Guitar Hero series would follow suit. The result is a very entertaining game that doesn't break a whole lot of new ground. Guitar Hero World Tour's in-game music creation feature isn't as revolutionary as it could have been due to its convoluted interface, but thanks to a huge setlist of recognizable hits and cant-miss gameplay, World Tour is a great game and certainly a huge step forward for the franchise.

The most obvious difference between World Tour and previous Guitar Hero games is that you can now sing, play drums, play bass, or play guitar. You can play one instrument alone, perform as a band with a few friends, or even hop online and rock head-to-head or as some sort of Internet supergroup. The long-awaited ability to play as a "real" band in a Guitar Hero game improves what was previously an experience shared by one or two people on guitar and bass. Bickering over setlists; swapping instruments midset; getting sweaty and stinky from jumping around in a small room while your friend with the terrible voice gives it his or her all in "Livin' on a Prayer" as your neighbors bang on the wall...that's when Guitar Hero World Tour is at its best.

GH World Tour is available as an instrument bundle or as a standalone disc. If you don't buy the bundle, you can use guitars from previous games as well as peripherals from both iterations of Rock Band. The latter option might be your best bet given the less-than-stellar performance of the World Tour hardware over a week-and-a-half of play. The drums have several issues: Cymbals are either too sensitive or not sensitive enough, and the bass pedal is inconsistent as well. That's nothing compared to the problems that we've had with the guitars. The fret buttons began to stick after a day, and it wasn't long before the strum bar failed to accurately recognize input. The frets held up better on our second guitar, but the strum bar quickly failed on it as well. One nice thing about that guitar is that you can activate star power either by tilting your instrument or by simply pressing a new button below the strum bar with the palm of your hand. Just be careful not to press the poorly placed pause button while you're at it.

The big new feature in Guitar Hero World Tour is the music studio. It lets you create and share your own tunes, as well as download songs from others. Should you watch all of the tutorials and put in the time to learn the complicated yet robust program, you'll be able to produce some amazing results. The bad news is that you have to put in a lot of time and effort because it's incredibly difficult to make music creation a user-friendly experience on a console, but it's near impossible if you force people to use a fake guitar. To make matters worse, there's no way to add vocals or lyrics to your creations, so it's quite possible your song will sound just like the hundreds of thousands of bad MIDI songs that permeate the Web. That said, if you're unable to channel your inner John Lennon, you can still enjoy the fruits of the music studio via other people's work. Just a week after the game's release, there are already a number of impressive user-created efforts available for download.

World Tour has a Career mode, but it involves little more than playing sets of songs to earn money and unlock more songs. You have some control over what order you tackle the setlists and can personalize your rocker. You can even build custom instruments, but your career is linear and not all that interesting. However, it is pretty neat to see Jimi Hendrix stroll out on stage for "Purple Haze" (even if he does look a bit zombielike), and now that they don't feature any weird string-breaking gimmicks, the boss battles are actually enjoyable. The game includes more than 80 songs, all of which are master tracks from the original artists. covers a variety of styles and features a huge number of big-name artists. These include The Eagles, Metallica, Michael Jackson, Van Halen, Lenny Kravitz, Sting, Oasis, No Doubt, Nirvana, Coldplay, The Doors, Foo Fighters, Jimi Hendrix, and many more. It's an impressive collection of artists, and you're not often stuck playing some unknown song by these acts, either. You'll get to play "Beat It" rather than "Man in the Mirror." You also won't get stuck with some terrible Gary Sharone-era Van Halen; you'll get David Lee Roth and "Hot for Teacher." As is now the norm for the genre, World Tour includes a store where you can purchase new music. It should be noted that outside of the new Metallica album, none of the downloadable content from Guitar Hero 3 is compatible, which is a shame.

For the most part, World Tour looks and plays exactly as you'd expect, but there are a few things it does differently; some good, some bad. Musicians' animations have been improved, particularly with regards to vocalist's lips being in-synch with the lyrics. The ability to customize your rocker's pre-and-post song animation is also cool--especially when you've got him or her doing the robot after a good performance and smashing his or her guitar after a failed song. The vocals constantly track your pitch, leaving a trail behind that shows how your pitch has changed. This is extremely helpful when you're trying to sing the right notes and intervals at the start of a verse in a song with which you're unfamiliar. Bass players get a new challenge to deal with in the form of an open note, which is represented by a large bar that covers the entire width of the note highway. You might not think hitting the strum bar without pressing a fret would be noteworthy, but as any bass player will tell you, it makes the experience even more realistic. Last, but not least, the game gives you a quick countdown when returning from the pause menu, which gives you a fighting chance at hitting your first notes.

Those are the new mechanics that work well, but there are a few that aren't as useful. When playing drums, you must activate star power by hitting both cymbals at the same time. While hitting the cymbals isn't hard in and of itself, hitting them in rhythm so that you don't lose your consecutive note streak is extremely challenging. Unless you're a skilled percussionist, you're probably better off waiting until your streak ends on its own rather than trying to activate star power. Guitarists will have to deal with the most unique and not-so-useful mechanic. Anytime you see notes attached with a purple rope, you're able to move up to the touch-sensitive area above the normal fret buttons and play the notes by sliding across or tapping the pad. This lets you play the "wah-wah" part from "The Joker" with ease, you can play slap bass, and it's fun to act as if you're playing a keyboard in "Rebel Yell," but those are the exceptions. Generally, you'll find that using the touch-area results in missed notes because either it's not sensing your input properly or you're struggling to go from the fret buttons, up to the pad, and back. It's a neat idea, but it's executed poorly.

Guitar Hero World Tour is a huge leap forward for the Guitar Hero franchise. It's a blast to play with friends, the setlist is top-notch, and the music studio is a nice--albeit extremely complicated--addition. Although it's a great game, as well as a vast improvement over previous series entries, it doesn't do a whole lot that Rock Band and its sequel haven't already done (and in some cases, done better). With that in mind, if you really like Guitar Hero's setlist and you're interested (and patient enough) in creating your own music, pack your bags to head out on tour. 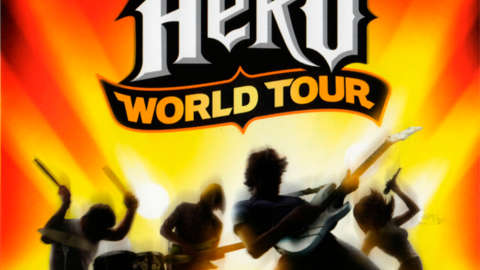 Guitar Hero returns with another installment of the rock music series, letting four players rock out on guitar, drums, and on the mic in Band mode, and eight players compete in Battle of the Bands.