Although the old adage about books is usually applicable to video games, it's actually just fine to judge Guitar Hero: Metallica by its cover. It conveys that, in this game, you can play Metallica songs "on guitar or with the whole band," as well as other tracks from "over 20 guest acts." Which songs and which guest acts, you wonder? The 49-song setlist is on the back cover, and how you feel about it will play a large part in how keen you are to pay full retail price for this game. Aside from some new online features and an intense Expert+ drummer mode (with two kick pedals!), this is little more than a Guitar Hero track pack jammed with metal songs and Metallica extras. Fortunately, a lot of the songs are fun to play, and there are plenty of tough tracks to challenge expert players. It's a bit overpriced when compared to the 80+ songs of the similarly priced World Tour, but Guitar Hero: Metallica is still great fun for those who like to rock out in their living rooms.

The 28 Metallica songs span the band's long career, from their first studio album Kill 'Em All up through last year's Death Magnetic. The previously released downloadable tracks from Death Magnetic will work with Guitar Hero: Metallica, but to play any other downloaded songs or to download new songs, you'll have to put in the Guitar Hero: World Tour disc. However, this doesn't mean that your session will be strictly Metallica; the game includes songs by other bands such as Alice in Chains, Foo Fighters, Judas Priest, and System of a Down. You can check out the full to get a better idea of how the game will jibe with your musical tastes, but on the whole it's a surprisingly thoughtful and well-rounded list.

Whatever your feelings about Metallica may be, there's no denying that this game has a lot to offer folks who are looking for a challenge. The guitar solos can be blistering, especially given that many of the songs are quite long. There is also an Expert+ mode for drummers, which demands that you use two bass pedals (splitter required) to keep up with the fierce onslaught of percussion. The suite of online competitive modes from World Tour is back with a few new additions, notably a four-versus-four Battle of the Bands mode. Online competition is still as fierce as ever, so casual players are advised to stick to the accommodating difficulty range of local play.

The presentation benefits from the metal theme, and the avatars of James Hetfield, Kirk Hammett, Rob Trujillo, and Lars Ulrich are instantly recognizable. Their animations are unique and add a lot of character to any Metallica song you play, though their lack of shoulder straps and occasionally goofy faces will still remind you that you're playing a Guitar Hero game. When you're not playing a Metallica song, you can use one of the iconic Guitar Hero characters (Axel Steel, anyone?) or you can use your own created character. Career mode (either solo or in a band) is structured in the same dull list format, but the arenas are quite impressive and you don't even have to play all of the songs to complete a career. This allows a welcome bit of flexibility, so you can avoid Metallica's heavier early work in favor of their more melodic stuff if you like, or vice versa.

There are a bunch of Metallica-themed extras included, from live video of performances to Metallifacts, which are performances of each song accompanied by trivia about the band, the song, and the game. The robust music studio from World Tour is back with a few new guitar sounds, but this game is really about playing songs, not recording them. At 49 songs, the game gives you less than the $60 World Tour, but $60 is less than you pay for 49 downloaded songs, so it's really a matter of perspective. Metallica haters should steer clear, and metalheads should snatch it up. For World Tour players who are on the fence, Guitar Hero: Metallica is a solid game with a strong setlist that offers you a great fake-plastic-rock experience. 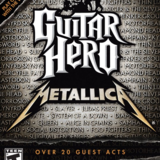